Installation of street lamps and repainting of road markings along Pintasan Segambut will begin in September as part of the upgrading works by DBKL. — RAJA FAISAL HISHAN/The Star

DRAINAGE upgrades in parts of Pintasan Segambut and underneath the Jalan Segambut flyover to address the problem of flash floods have been completed.

“Pintasan Segambut is near the KTM Segambut station, which is a hotspot for flash floods.

“I raised the matter with the Drainage and Irrigation Department (DID) on increasing the frequency to clean and dig sand out of Sungai Keroh, which runs under Pintasan Segambut,” she said.

Yeoh was speaking to StarMetro during a “Teh Tarik with YB” community engagement with Taman Cuepacs Segambut residents at the Jalan Udang Geragau Community Hall.

Besides this, she said repainting of road markings and installation of street lamps would be carried out in September and October.

She said the community hall would also be given a facelift under the MP’s allocation.

“Repair works will be carried out and zinc roofing installed at the hall.

“Kuala Lumpur City Hall (DBKL) is currently managing most of the community halls in the city but I have written to them requesting for the Jalan Udang Gantung Taman Cuepacs Residents Association (RA) to co-manage it.

“I thank DBKL for approving the application,” she said, adding that hall rentals and organising community events would be easier with such a working arrangement.

Yeoh also pledged RM10,000 to the RA for its community activities.

“The hall will be repainted and wiring and plumbing works will be carried out as well.

“We are also getting a new awning, work desk, air-conditioners as well as a 3.6m fence erected next to the hall.

“Residents play football on an empty land nearby and the fence will help prevent the ball from hitting the hall,” he said.

Yeoh highlighted that a new fire station would be constructed next to Lotus’s Kepong.

“I am proposing a health clinic to be built for Segambut residents next to the fire station,” she said. 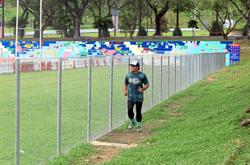