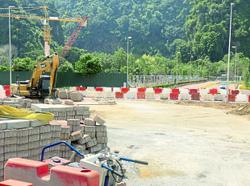 The roof for the Gerbang Malam bazaar in Ipoh is 60% complete. — RONNIE CHIN/The Star

The Perak housing, local government and tourism committee chairman said the work taking place along Jalan Dato Tahwil Azar might appear to have halted but it was still ongoing.

“I understand that the project is now 60% completed in terms of basic infrastructure.

“There were some delays earlier because of the Covid-19 pandemic, movement control orders and also some issues with the procurement of materials,” she told reporters after the launch of a Tourism Police Unit in Ipoh.

“The roof also needs to be custom-made, which is why it is late.

“I was informed that this could be resolved and it would be completed this year,” she added.

There had been grouses from traders at the popular night bazaar after the umbrellas that they were using at their stalls were blown off in a recent thunderstorm.

The roof project was announced by Ipoh mayor Datuk Rumaizi Baharin in September 2020 and was initially expected to be completed in March this year.

The project is said to cost about RM3mil, with the first phase involving covering a stretch of about 380m with a shade structure.

On a separate matter, Nolee Ashilin said Ipoh City Council was now in the midst of looking for another concessionaire to manage the Tasik Cermin Eco-Park.

She said there were some issues with the previous operator and the city council had to cancel the concession agreement.

The one-of-a-kind quarry eco-park was launched in February.

It features several attractions, including two “mirror lakes” that are accessible via tunnels.

On the garbage collection issue ongoing since May, Nolee Ashilin said there were still some areas that had not been fully resolved.

She clarified that the issue was not solely because of one concessionaire but also involved other companies.

“I am told that the zones under MajuPerak Utilities Management Sdn Bhd have been resolved.

“There are other zones under different concessionaires that have problems,” she said.

She added that the issue was related to the lack of manpower and compactors.

“The city council is trying to hire other operators and also trying to resolve the problems on their own,” Nolee Ashilin explained. 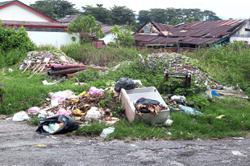