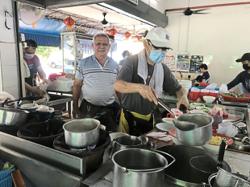 Chua is the third generation to carry on the family tradition of making fish balls. — Photos: LOW LAY PHON/The Star

Quality homemade fish balls should have a little bit of bounce, are usually irregularly shaped and taste a great deal better than the processed ones.

After more than 30 years in the business, the people behind Loke Yew Road Fish Ball Noodle restaurant in Taman Midah, Cheras in Kuala Lumpur, know the secrets that go into making tasty fish balls.

Third-generation proprietor Chua Wai Hoong still uses the recipe handed down by his grandfather to make the fish balls.

The business started off as a small stall in Jalan San Peng before it moved to its current location in 2016.

“The fish balls are made with 100% ikan parang (wolf herring) and a little seasoning.

“No starch or fillers are used.

“Ikan parang has a slight sweetness which adds to the overall flavour of the fish balls,” he said, emphasising that they were made fresh daily.

He said it was not easy locating a fish supplier, adding that it was sourced from Johor.

Chua said he would close the shop should a particular batch not be up to standard.

The homemade fish balls are neither completely spherical nor overly bouncy and are full of flavour.

A bowl of fish ball noodle soup (RM8) comes with several fish balls and fish cake as well as your preferred choice of noodles.

I opted for the kuey teow noodles, which is the recommended choice.

The broth is certainly worth a mention as it was flavourful with bits of fried lard and pickled mustard greens to cut through the natural sweetness from the fish.

Chua said nothing would go to waste at the restaurant as the fish bones were used to make the stock.

“Even the water in which the fish balls are boiled is also used in the broth,” he revealed.

Locals certainly need no introduction to their offerings as Chua is able to sell several hundred bowls each day.

The shop also serves a dry noodle version with a bowl of fish ball soup by the side.

It is crispy on the outside with a springy texture in the centre.

The eatery sells beef ball noodles and meat balls too, although these are sourced from a supplier.

Although the shop is usually crowded, the turnover of customers is quite quick so you will not have to wait too long.

Parking can be tricky if you head there in the early morning, as the restaurant is located near a morning market.

I would advise you to go a little later when the morning market crowd has left.

Alternatively, they have another shop in Bandar Mahkota Cheras, Kuala Lumpur.

The restaurant operates from 6am to 4pm.

Days off are not fixed, so I would recommend checking its Facebook page to avoid disappointment. 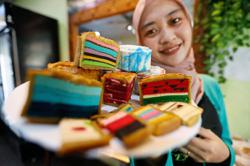