THE retention pond near Mandarin Park, Ipoh, is in need of regular maintenance to address repeated flooding issues affecting the area.

Mandarin Park resident Ooi Cho Khan, 65, said the pond, which was filled with undergrowth, was not able to accommodate the high volume of water and would overflow.

Ooi, who works as a secretary in an accounting firm, said this subsequently caused flooding in her residential area along with Kampung Pasir Puteh and Happy Garden.

“Ipoh City Council needs to clear the undergrowth in the retention pond.

“The pond is quite shallow and it should be deepened,” she suggested, adding that the pond should be maintained regularly.

Ooi, who has been living in Mandarin Park since 1992, said another issue was the area’s drainage system.

“We need bigger drains as the existing ones are too shallow and cannot cope with the volume of water.

“I hope the city council engineers will look into this issue to resolve the problem once and for all,” she said.

“The (Pasir Puteh) village nearby also experiences flash floods regularly whenever there is a downpour.

“I think the villagers are getting fed up too,” she added.

Ooi’s home was flooded during the latest incident on May 15, causing her car to be damaged as well.

“The lalang in the pond needs to be cleared away and the pond should also be deepened to alleviate the flooding issues,” he said.

“We also found some sand sediment and stone in the monsoon drain in the area, which will need to be cleared away.

“I have raised the matter with the city council and mayor and hope action can be taken as soon as possible,” he added.

“I received a call on May 1 that many houses in Mandarin Park had been inundated after about two hours of non-stop rain since 4am,” he said, adding that the last time the area was badly affected was in 2018.

“The water usually recedes quickly but this time, it took about 90 minutes to subside,” he added.

Khoo pointed out that the roads, retention pond and drains in the area were upgraded in 2019.

“It was hoped that the upgrading works would resolve the flash floods in the area but unfortunately, it is happening again,” he said.

Mayor Datuk Rumaizi Baharin had said in April that the city council had several plans to deal with flash floods in the city.

The quick win way includes cleaning up drains to alleviate the issue while the short-term measures include deepening retention ponds or rivers.

Medium-term plans are to build new retention ponds or pumphouses while long-term plans identify retaining certain areas from being developed.

When contacted, a city council spokesperson said the monsoon drain was cleaned following the flash flood.

“The retention pond will be cleaned this week,” he said. 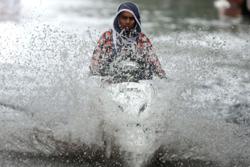