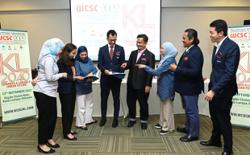 THE Malaysian Institute of Public Works (Ikram) has been appointed to identify why part of the retaining wall at a construction site in Taman Pertama, Cheras, failed, resulting in a house next to it collapsing.

Its chief executive officer Datuk Mohd Taufik Haron said a review of the wall designs and specifications was also under way.

He explained that some 40% of the 65m-long wall shifted by one metre on Sunday, heavily damaging a two-storey house.

Apart from the damaged house, which was in the midst of renovation and unoccupied at the time, occupants of six nearby houses were also ordered to evacuate over safety concerns.

“A discussion with the developer on the matter is also ongoing. They have been asked to provide the relevant data,” he said.

Kuala Lumpur mayor Datuk Seri Mahadi Che Ngah, who visited the site yesterday, said a stop-work order had been issued to the developer, with remedial works to commence immediately.

“Ikram has been tasked to oversee the works. Details of their findings will be announced later,” he told reporters.

Mohd Taufik said the wall would be fortified with earth berms (narrow ledge or shelf at the top or bottom of slope) to be supported with concrete blocks.

“But the volume of soil needed for this is yet to be ascertained. We are looking at around 2,000 cubic metres of soil.

“We are also still deciding on the new height of the wall, between 4m to 8m, to ensure that it is stable,” he said, adding the timeline had yet to be decided.

“We need to first collect relevant data including on project designs, as well as the construction sequence at the site,” he said.

Mahadi said the residents of affected homes were relocated to a nearby hotel, with the cost to be borne by the developer.

“Electricity and water supply to the houses have also been discontinued out of safety concerns.

“Continuous monitoring at the site will be done by the Kuala Lumpur City Hall (DBKL),” he said.

It was earlier reported that the two-storey terrace house collapsed due to a landslide.

However, Mahadi disputed this, and reiterated that the incident was caused by the retaining wall shifting.

According to a DBKL statement, the project site in Jalan Selangat involved the construction of a serviced apartment.