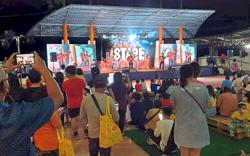 Hii (sixth from right) with Chen on his right at the launch of SIDF 2022.

Themed “Jejak Angin” (Wind Trail), the event will take place from June 9 to 11 at the Civic Centre in Sibu, Sarawak.

The audience can expect a captivating show by 100 performers from around the world.

The local troupes are from Sibu, Bintulu (Sarawak), Kuala Lumpur and Perak.

“Initially, we were only planning to have between 10 and 12 local troupes. However, with the reopening of borders and approval from Sarawak Tourism, Creative Industry and Performing Arts Ministry, we were able to invite foreign performers,” said Chen.

He added that some of these foreign artistes had performed in the previous SIDF.

Among them are Surya Medal Puteri Kencana who performed in 2017, Team Vibe Worldwide in 2018 and the Singapore Chinese Dance Theatre in 2012.

Chen said the event would include workshops and seminars.

The dance workshop and seminars are to be held at RH Hotel Sibu during the day.

Chen said an early bird promotion until May 25 would enable tickets to be purchased online for RM35 each.

The event is organised by Hornland Dance Theatre and supported by the Sarawak Tourism, Creative Industry and Performing Arts Ministry and Sibu Municipal Council.

Tickets can be purchased via http://sidfestival.com/early-bird-promotion/