Wong with a macaw at his farm in Gelang Patah.

For more than 20 years, businessman James Wong has been successfully breeding birds to ensure their survival and protect various species from going extinct due to poaching.

The 46-year-old is one of the biggest licensed bird breeders in the country, with 2,000 birds of 60 species at his farm in Gelang Patah, Johor.

“I have licences from the Wildlife and National Parks Department (Perhilitan) for each of the birds at my farm,” he said.

He added that songbirds such as the white-rumped shama were sought after by bird lovers as it was a beautiful animal with a wonderful voice.

Wong said the survival of such species would be affected if poaching was not curbed.

“In the wild, such birds can only breed twice a year. If poaching is rampant, their numbers will go down if no action is taken to save the birds.”

Wong said his licence from Perhilitan also permitted the sale of the birds that he bred.

He stressed that buying exotic birds illegally through the black market would only encourage more poaching activities.

“A person caught by Perhilitan for possessing wild animals without proper licences could face thousands of ringgit in fines,” he said. 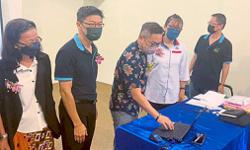