THE Kuala Lumpur City Hall (DBKL) has unveiled its Budget worth RM2.704bil for next year, which is a 1.9% increase from the Budget for this year.

From that amount, it allocated RM1.943bil for administrative expenses and RM761.3mil to cover development expenditure.

Meanwhile, development expenditure would cover the spending by DBKL, amounting RM595.1mil, as well as funds from the government totalling RM166.2mil.

Announcing the Budget on Tuesday (Dec 21), mayor Datuk Seri Mahadi Che Ngah said DBKL is expected to increase its income to RM2.298bil in 2022, from RM1.964bil this year.

“Our main income source is assessment tax, for which we expect an increase by RM70mil next year.

“This will be a 5.4% increase from the RM1.36bil that we collected this year.

“We also expect an increase in income from building control and planning, worth RM433.5mil next year, compared to RM213.7mil this year,” he said when met at Menara DBKL 1 in Jalan Raja Laut.

Among issues addressed in the budget were flood mitigation, affordable housing, improving urban living, beautification of the city and traffic control.

Some RM98mil was set aside towards flood mitigation, while RM33mil would go towards arts and culture programmes, as well as sports events.

A whopping RM227.3mil was allocated for traffic control, which included highway developments and road widening for traffic dispersal.

For beautification efforts, DBKL set aside RM90.4mil which included improvements of pedestrian walkways and tree planting in the city. 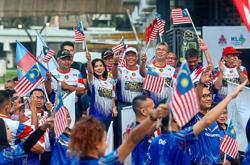