Raising awareness about our rivers Regulars on the 4km-long trail have spotted at least six bird species.

BANDAR Baru Bangi residents now have access to a scenic river trail in Hulu Langat for their recreational activities.

Built by the banks of Sungai Langat, the 4km-long paved trail starts at Persiaran Universiti near the Universiti Kebangsaan Malaysia (UKM) campus and ends at Jalan 3/12 in the Bangi Perdana housing area.

A collaboration between the Environment and Water Ministry and Hulu Langat Drainage and Irrigation Department (DID), the route affords hikers and cyclists an uninterrupted view of the river and its rapids, with the blue sky as backdrop.

Walking along the trail, one will pass fruit and vegetable plots and residential and village dwellings that make up part of Kampung Tangkas, alongside long stretches of greenery.

“I have spotted no less than six bird species here.

“As there is plenty of fish in the river, the area also supports a plethora of wildlife such as otters and monitor lizards,” he said.

Mokhtar recently came across a beehive towards the end of the trail at Bangi Perdana. The bees have built their hive under a tree located about 50m away on a unpaved trail just next to the paved one winding into Jalan 3/12.

“I would advise adults with children to keep clear away as bee stings are known to land victims in hospital.

“I hope the Fire and Rescue Department can do something about this,” he told StarMetro.

Bangi Perdana resident Hussin Sawon, 52, said though the trail was only opened to the public on Nov 1, it was already seeing a steady stream of visitors in the early mornings and evenings.

“When work started, everyone was eager to see how it was going to turn out. Well, we are not disappointed,” he said.

Cyclists Azlan Mohd Saibani, 52, and Ainuddin Abu Bakar, 45, both agreed that the work done for the new trail has made a positive impact overall on the formerly rugged terrain.

“I’ve been coming here to fish and cycle since 1989. Before this, the river was mostly obscured by a wild mass of vegetation. It was also a hotspot for illegal dumping.

“Now, with the vegetation cleared and a proper trail, people can bring their families for recreation,” said Azlan.

“It is safe as there are no cars. Formerly, people would take their morning walks on public roads.

“This was rather risky due to heavy traffic, especially during peak hours,” he added.

Taman Kajang Utama resident Shamsul Fitri, 42, who visited the trail for the first time, felt it was suitable for families with young children and senior citizens because of the even terrain.

“It’s an easy route for hikers and beginner cyclists too,” he said.

In fact, he believes the terrain is friendly enough to even accommodate baby strollers and people on wheelchairs, provided they can pass the barrier at the entrance put up to deter cars and motorbikes from making use of the river trail. Proposed improvements

Pleased as they are with the new walking and cycling path, visitors are hoping the project stakeholders would consider introducing a few improvements.

Azlan wanted lights to be installed to illuminate the trail as it would allow visitors to extend their recreational activities until late evenings.

He also hoped the authorities would set up higher barriers and instal CCTVs to monitor and deter illegal rubbish dumping activities, which used to blight the riverbank.

Shamsul said landscaping features such as trees would serve to provide the trail some shade.

The midday sun, he added, was a deterrent for some, resulting in the trail being largely deserted in the afternoons.

Gazebos with benches would also serve senior citizens and parents or minders with young children who wished to take a breather halfway through the trail.

Bangi MCA deputy chairman Datuk Hoh Hee Lee, who mooted the idea, said that gazebos would act as a good gathering point for senior citizens after their morning walk.

“The Sungai Langat river trail is a long overdue project. As such, it is welcomed by the community,” said Hoh.

However, the public should not merely treat the new river trail as another recreation spot, he said.

“The essence of this project is to raise awareness that we should love and protect our rivers. Not only are they an important source for our drinking water, rivers also play a role in providing income, through recreational activities such as fishing and river cruises.”

Hoh disclosed that studies on river trails began when the late Datuk Mohd Mokhtar Ahmad Dahlan was Selangor state exco member from 1999 to 2008.

This one, by Sungai Langat, is but a stepping stone towards a comprehensive programme to upgrade the rivers to a level where fish and prawns could thrive once again, he said.

“When I was young, I could catch prawns as long as 15cm in Cheras as Sungai Langat flowed through here. Nowadays, that would be rare,” he added.

Hoh hoped the Sungai Langat river trail would not stop at the 4km stretch in Bandar Baru Bangi.

“If it is extended, people can cycle from Cheras up to Putrajaya, and until Dusun Tua and Pangsun in Hulu Langat,” he said.

Along with these trails, Hoh urged authorities to hold awareness drives to engage factories, plantations and the public on the importance of not using the river as a dumping ground for rubbish, effluents and sullage.

When contacted about the requests for upgrades to the Sungai Langat river trail, Hulu Langat DID replied that it would take note of it, adding that the implementation would depend on budget availability.

DID added that non-governmental organisations or private companies that wished to carry out their corporate social responsibility programmes were encouraged to come forward.

Part of a national programme

In March this year, during a ceremony to officiate the 2021 World Water Day celebration at the Sungai Langat river trail near UKM, Environment and Water Minister Datuk Seri Tuan Ibrahim Tuan Man said his ministry aimed to build 1,000km of river trails by 2023. In total, 10,000km are targeted for completion by 2030.

When contacted, Zaini, who has long been a proponent of river restoration, said the river trail project in Sungai Langat began in September this year.

Zaini added that there was a plan for an additional 50km river trail from Bangi to Putrajaya.

The materialisation of the river trail programme can be traced to the campus of Universiti Teknologi Malaysia (UTM) in Johor Baru when Zaini was vice-chancellor from 2008 to 2013.

Today, there are 30km in total of trails built along streams leading to Sungai Skudai in the UTM campus.

He suggested during a talk at Universiti Putra Malaysia in Serdang that even simple acts could make rivers accessible to the public for recreational purposes.

“When it comes to the question of saving our rivers, there is no need to look too far. You can start in your own backyard by picking up rubbish along the banks,” Zaini said at the time.

UKM Bangi responded to this call by organising joint rubbish clean-up operations of the land that bordered Sungai Langat and the river itself over the past few years.

Their efforts were featured in the Friends of Sungai Langat social media page.

According to the DSK programme guidebook, the Environ-ment and Water Ministry will work with strategic partners such as the DID district engineer, the local authority, and state and Federal Government agencies to build new trails.

Applications to be part of the DSK programme must be submitted to the area DID for vetting.

They will depend on the readiness of the local community, suitability of the site’s physical and geographical factors, proximity to residential and industrial areas, the upstream of the river inlet and, ideally, be close to the sea and beaches.

Construction costs must be low, with prior permission obtained from the authorities and not involve individual land or plots with temporary occupation licence.

Activities such as permanent structures that can impede the function of the river reserve, commercial activities such as hawker stalls, and any type of action that can lead to pollution are forbidden on river trails under the DSK programme.

River trails totalling 420km have been built throughout the country under the DSK programme launched in November last year, DID revealed.

There are 189 main river basins in the country, spanning a distance of 17,344km. 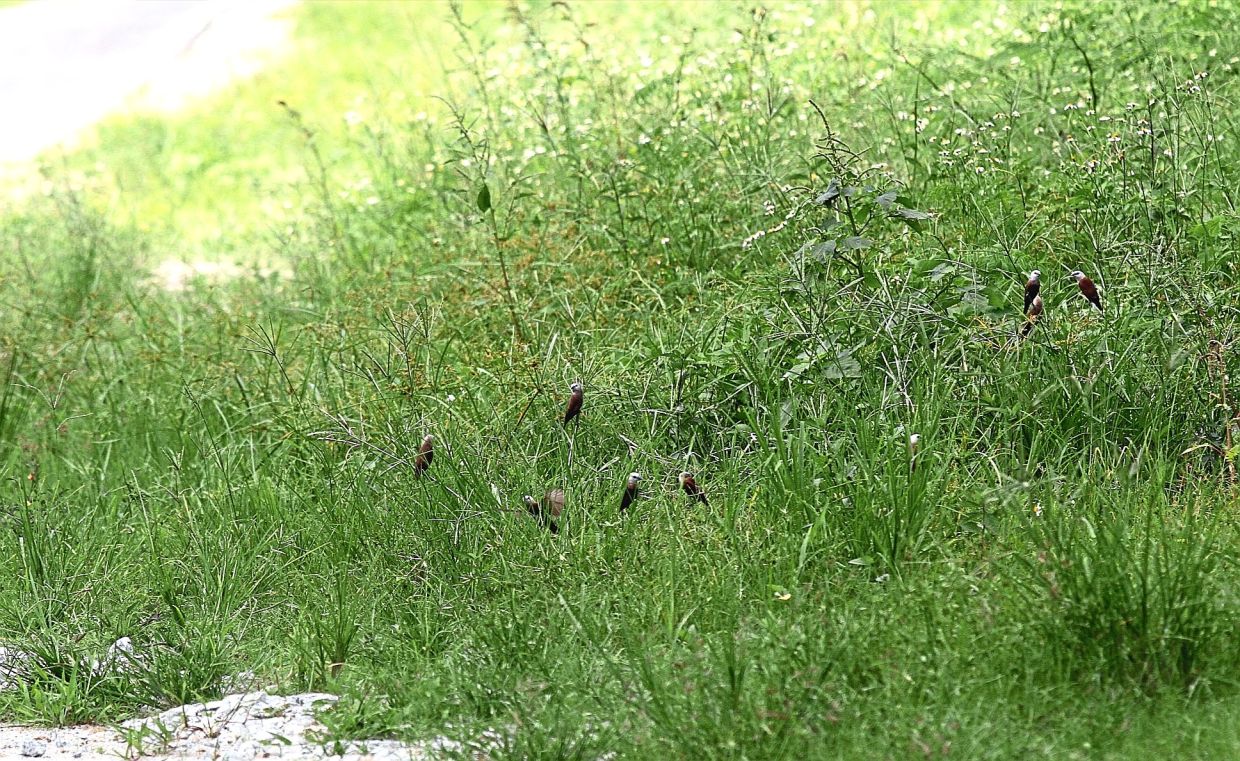 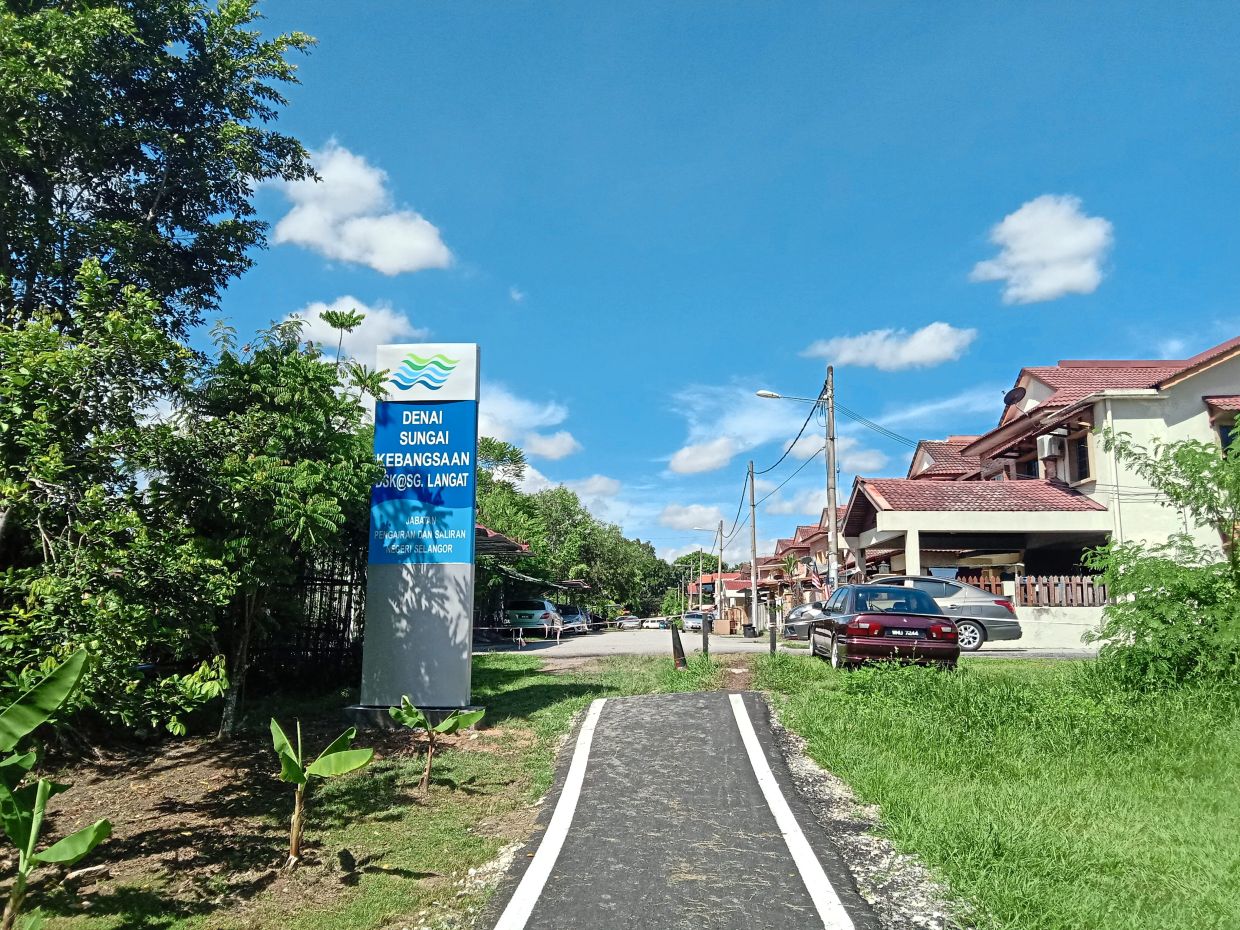 Regulars on the 4km-long trail have spotted at least six bird species.

The trail ends at Jalan 3/12 in the housing area of Bangi Perdana.

Cyclists Azlan (rear) and Ainuddin find the trail flat and suitable for families with young children.

Hussin: The trail is becoming popular with walkers in the mornings and evenings.

Under the River Trail Programme, the Environment and Water Ministry is targeting 10,000km of trail construction in river reserve areas by 2030.