Contradicting the eco-purpose:Free roadside parking in Kuala Lumpur has been extended several times and is due to end on Oct 31. — RAJA FAISAL HISHAN/The Star

Shop owners in the central business district (CBD) have had to put up with it as the car owner was taking advantage of the free roadside parking in Kuala Lumpur.

Earlier in July, then Federal Territories minister Tan Sri Annuar Musa had announced that roadside parking would be free until Aug 31.

Annuar said the move would allow motorists to save on parking charges and use the money to buy essential items during the Covid-19 pandemic.

Although there is no word on whether current Federal Territories Minister Datuk Seri Shahidan Kassim will extend the initiative, not everyone is cheering.

While most, if not all motorists, will naturally welcome an extension, others say it has led to selfish individuals hogging limited bays.

Looking at the bigger picture, they argue the move is contrary to the city’s low-carbon policies.

Kuala Lumpur mayor Datuk Seri Mahadi Che Ngah has been advocating a low-carbon lifestyle, in line with the target of reducing 70% of the city’s carbon emissions by 2030.

Mahadi was also mulling closing DBKL carparks on Fridays to encourage its employees to take the public transport.

DBKL has also been in talks with developers about limiting the number of indoor parking bays in future commercial buildings, although this policy will only be set in motion once the city’s MRT network is fully completed.

DBKL to some extent has lost its direction in the city’s parking management, said transportation planning expert Goh Bok Yen.

He said that while the government had been spending billions of ringgit on improving public transportation, at the same time more roads were being constructed.

“And now, by offering free parking, the local authority is actually creating convenience for private cars and so, to some extent, it is creating a resistance to public transport usage.

“There must be a strategy and policy to balance the two.’’

Goh said the city should move towards a more sustainable system. Goh says a better system is to have the parking rates increase every hour, to stop bay-hogging.

“Free parking is a popular political product, but it is in conflict with Kuala Lumpur’s goal of achieving a green and world-class city.

“So I personally do not agree with free parking,” he said.

Ihsan Zainal, who is the former president of Malaysian Institute of Planners, said DBKL over the years had tried to push people into using public transport, including discouraging single occupancy vehicles from entering the city and increasing parking rates while reducing parking bays in future commercial buildings.

“While I can appreciate the fact that free parking was mooted with the idea of reducing the cost of living during the Covid-19 pandemic, I do hope it is a temporary measure.

“We need to focus on improving and encouraging the usage of public transport.

“Policies should be geared towards making streets smaller and providing fewer parking spaces to discourage driving. “We have spent a lot of money building the LRT, MRT and monorail systems, so we need to improve connectivity.

“The last mile, from the station to the home, should ideally be walkable or cyclable,’’ he said.

Ihsan Zainal noted that during pre-Covid times, the city would close major roads during car-free Sundays, which encouraged people to walk.

“It has been proven in many major cities of the world that when you close certain streets, people will attempt to walk. And businesses will thrive.

“At Jalan Tuanku Abdul Rahman, for instance, DBKL has made the roads narrower but the pedestrian walkways wider.

“They are on the right track and must be supported,’’ he said.

Both Goh and Ihsan Zainal agree that offering free parking once in a while to celebrate a special occasion is preferable to making it a long-term measure.

Making money should not be the objective

It is no secret that DBKL has been on the losing end for paid parking.

Many mayors over the years had admitted to forgoing millions of ringgit in lost revenue over parking.

For years, parking has been outsourced to third parties.

Only in 2015 did the city start making money through a privatisation deal on parking.

However, since October last year, DBKL had taken over the management of parking in the city.

However, the timing of these methods during the height of the Covid-19 pandemic coupled with the free parking initiative have made it unlikely that these companies will make much money from parking. A private carpark in Pudu is empty on a working day, now that there’s free roadside parking.

Goh and Ihsan Zainal, while not against privatisation per se, feel that its effectiveness is hinged on proper implementation and enforcement.

“Charging for parking is the best way to manage demand but it is not necessarily easy to implement.

“You can use the app to pay but there is no proper system to deal with double parking,” Goh pointed out.

He thinks that a better system is to have the parking rates increase every hour as opposed to a fixed rate, to prevent people from hogging bays.

“In certain CBDs, the first 30 minutes to one hour should be one rate and after the first hour, the rate should increase exponentially.

“In fact in some zones after a few hours, it should become a traffic offence.

“Privatisation does generate income for the city, but making money should never be the long-term goal,” he added.

Ihsan Zainal said the long-term goal should be to to ensure more people take public transport.

“We should make the city barrier-free, walkable and pedestrian-friendly,” he said. 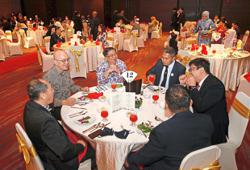