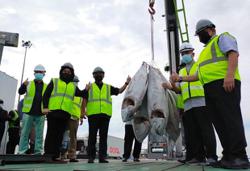 Tan (second right) and other port officials welcoming the return of crewmen onboard two new tuna fishing boats and their catch at the Deep Sea Wharves in Butterworth, Penang.

The Penang Port Commission (PPC) chairman said PPC and Penang Port Sdn Bhd (PPSB) had reached a consensus with the Agriculture and Food Industries Ministry over the matter.

“NBCT is well-equipped as Penang also has many tuna processing factories.

“We also enjoy the geographical advantage of having the Penang International Airport.

“With these advantages, tuna catches can be shipped abroad faster, which is one of the factors that attract the landing of more tuna fishing boats here.

“Statistics by the Agriculture Ministry show that all ports in the country have caught tuna weighing around 53,855 metric tonnes valued at RM520mil as of August this year. Boat crewmen unloading the tuna that they caught in the Indian Ocean.

“The Government aims to push the value of catch to RM1bil, and provide more employment opportunities and bring in more revenue to the country,” he said.

The boat crew members had returned with 52 tonnes of fish worth RM5mil after spending three months in the Indian Ocean.

“The tuna fish caught in the Indian Ocean will be transported to Penang Port before being exported to Japan, China, the United States, Thailand, Singapore and Vietnam.

“There are daily ships from Penang Port to China.

PPSB was set up in 1994 under the Finance Ministry Incorporated while PPC comes under the Transport Ministry, which is the port’s licensing authority. 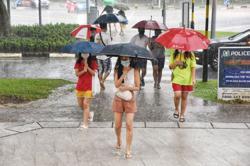