Penang hopes to get all adults jabbed by mid-September

Assemblymen discussing the pandemic situation and other matters during the sitting at the state assembly building in Lebuh Light.

PENANG is expected to get its entire adult population vaccinated with at least one dose by mid- September with over 300,000 doses of vaccines incoming.

“With this, we will be able to ensure that 100% of the state’s adult population has at least the first dose by mid-September,” she said during the meeting at the state assembly building in Lebuh Light yesterday. 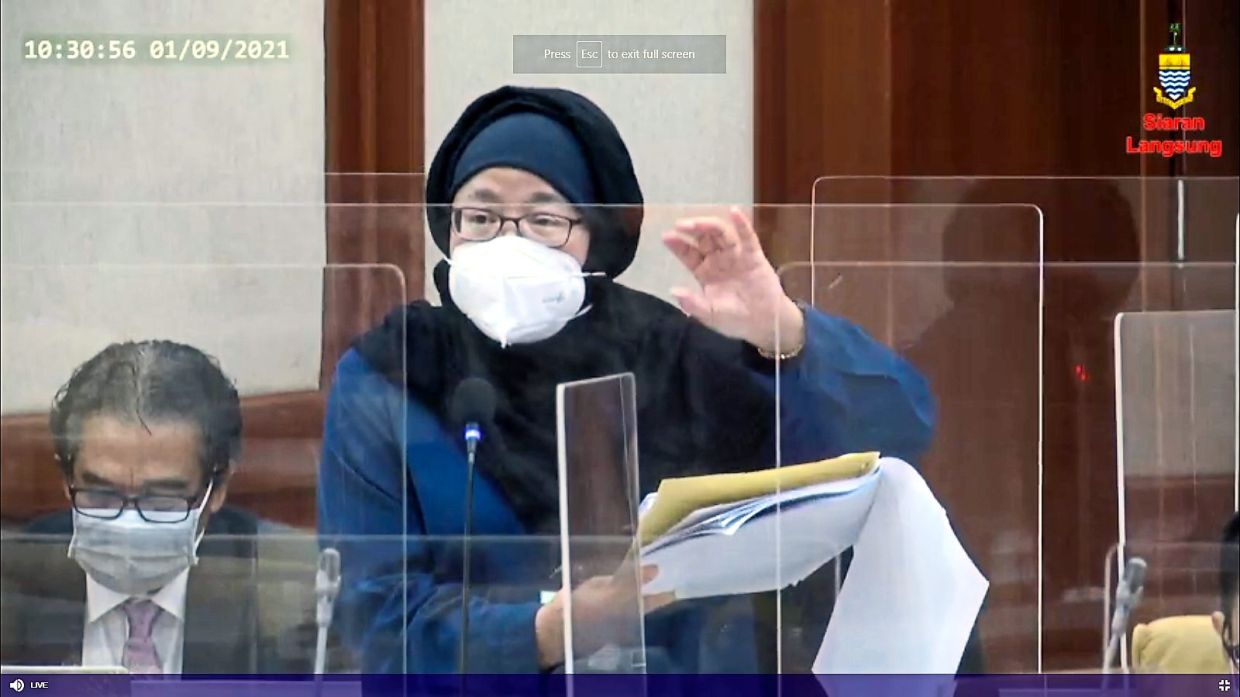 Norlela giving information on vaccines during the state assembly meeting.

Meanwhile, in answering an oral question from Syerleena Abdul Rashid (PH-Seri Delima) on the Covid-19 case surge and vaccination rate in Penang, Norlela said this was because Penang was not included in Operation Surge Capacity like Klang Valley.

“To compare, Klang Valley received over 6.3 million doses of vaccine in July while Penang received only 753,640 vaccine doses.

“At that time, Penang was not included in Operation Surge Capacity because our number of cases was not high like in Klang Valley so the Federal Government decided the vaccines should mostly go to areas in Klang Valley, Kuala Lumpur and Selangor.

“It was during this period of three weeks that Penang experienced such a surge in cases.”

She said at that time, priority was also given to Sarawak in anticipation of elections to be held there and in August, Johor received two million doses as well.

“We questioned why Penang was not given the same treatment as Klang Valley like in Operation Surge Capacity but was assured that the cases would not spread to Penang.

“At that time, we were told that Klang Valley as an epicentre of the pandemic needed to be given the vaccines for cases to go down.

“This is to prevent the infection in Klang Valley from spreading to other states but unfortunately within that three weeks, the surge happened here.”

However, Norlela said with over 300,000 doses of vaccine incoming, Penang is expected to get its entire adult population vaccinated with at least one dose by mid-September.

She said the state received a verbal offer from the Health Ministry to obtain the vaccines earlier than expected.

Dr Norlela added that the state’s public healthcare system was well-equipped to face the Delta variant and added that according to the latest updates, there were seven Delta cases in the state.

“This makes Penang the second highest state after Sarawak to record such a number of cases of the Delta variant.

“But the exco member (Norlela) said there are only seven Delta cases at present.”

Norlela clarified that the data was updated as of the previous meeting two days ago but Satees chided her for bringing irrelevant information from Aug 12 when it was already Sept 1.

State Assembly Speaker Datuk Law Choo Kiang asked both Satees and Norlela to sit down and helped clarify that all the answers provided were within a certain timeline.

“Answers cannot be provided the night before, assemblymen need to understand this.

“It is important to get updates up to a day before for issues like this before the meeting but any updates required can also be provided after the meeting,” he said. Soon tabled the amendment to allow those aged 18 and above to contest for state seats.

During the sitting, the Penang State Constitution Enactment (Amendment) Bill 2021, which aimed at allowing those aged 18 and above to be candidates for state seats in the next polls, was passed.

The amendment was tabled by Soon Lip Chee (PH-Bagan Jermal) and an unanimous decision makes Penang the seventh state after Sabah, Perlis, Terengganu, Sarawak, Kelantan and Perak to permit those aged 18 and above to be part of the political process in the country.

Soon, who is state youth and sports committee chairman, said a survey involving 3,475 respondents, aged 15 to 35, was conducted by Penang Youth Development Corporation between Dec 8, 2020, and June 6, 2021.

“The move will bring us on par with countries such as Australia, Canada and the United Kingdom in allowing those above 18 to contest in elections,” he said when tabling the Bill.

The state assembly also passed a motion to appoint two members of the Senate – Fazlina Siddiq, 44, who was appointed a senator for the first time, and Lim Hui Ying, 58, who held the senator position in the previous term.