Johoreans hold on to positivity, hoist the Jalur Gemilang to welcome National Day

A Kampung Bendahara resident getting help from his mother as he puts up a flag, one of the many that decorate the entrance to his house. — Photos: THOMAS YONG/The Star

THE Covid-19 pandemic has not dampened the patriotic spirit of Johoreans, as many are continuing the tradition of raising the Jalur Gemilang to celebrate the country’s National Day.

Despite challenges brought on by the pandemic and strict standard operating procedure (SOP), several Rukun Tetangga (RT) committees and residents associations are carrying out competitions to encourage more people to hoist the Malaysia flag and share their National Day stories.

The idea was to spread cheer and the spirit of patriotism, said Kampung Bendahara RT chairman Mohd Karim Wagiman.

He said a national flag-raising competition had been launched for residents in the area.

“Many people are going through a difficult time because of the pandemic and I believe a competition like this can bring some happiness. 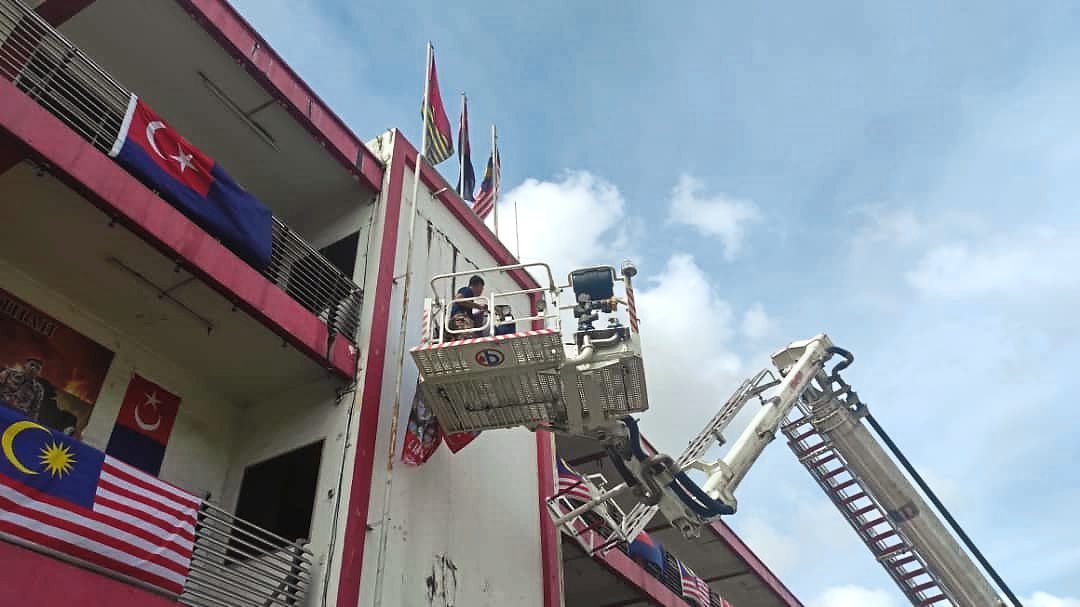 Firemen using a skylift to hoist the flags atop this building.

“We want people to get excited about raising the national and state flags.

“The aim of holding the competition is for them to come together, share their experiences related to the special day and encourage them to be united and patriotic citizens.

“Since we are also in the fight against Covid-19, the Jalur Gemilang holds more meaning this year as it is a symbol of our resilience and solidarity in the battle against an unseen enemy,” he told StarMetro at the village in Johor Baru.

Mohd Karim said the village had been taking part in the Johor Information Department’s “Kibar Jalur Gemilang” competition for many years and earned the top spot in 2016.

“However, the competition was not held in the past two years due to the pandemic.

“So we decided to have our own competition as it is a highly anticipated event.

“There are some who have been preparing for the event since the beginning of the year and I have also been getting calls from residents asking me about the competition since early July,” he added.

Mohd Karim said those who fly 10 or more flags at their premises, stood a chance of winning cash prizes.

Hamdan Ismail, 84, said he put up many flags around his house as the act of flying the Jalur Gemilang was an “honour” in itself.“This is my humble way of showing my love and gratitude for Malaysia, as it has given me and my family a peaceful home for generations,” said the retiree who has 24 grandchildren. 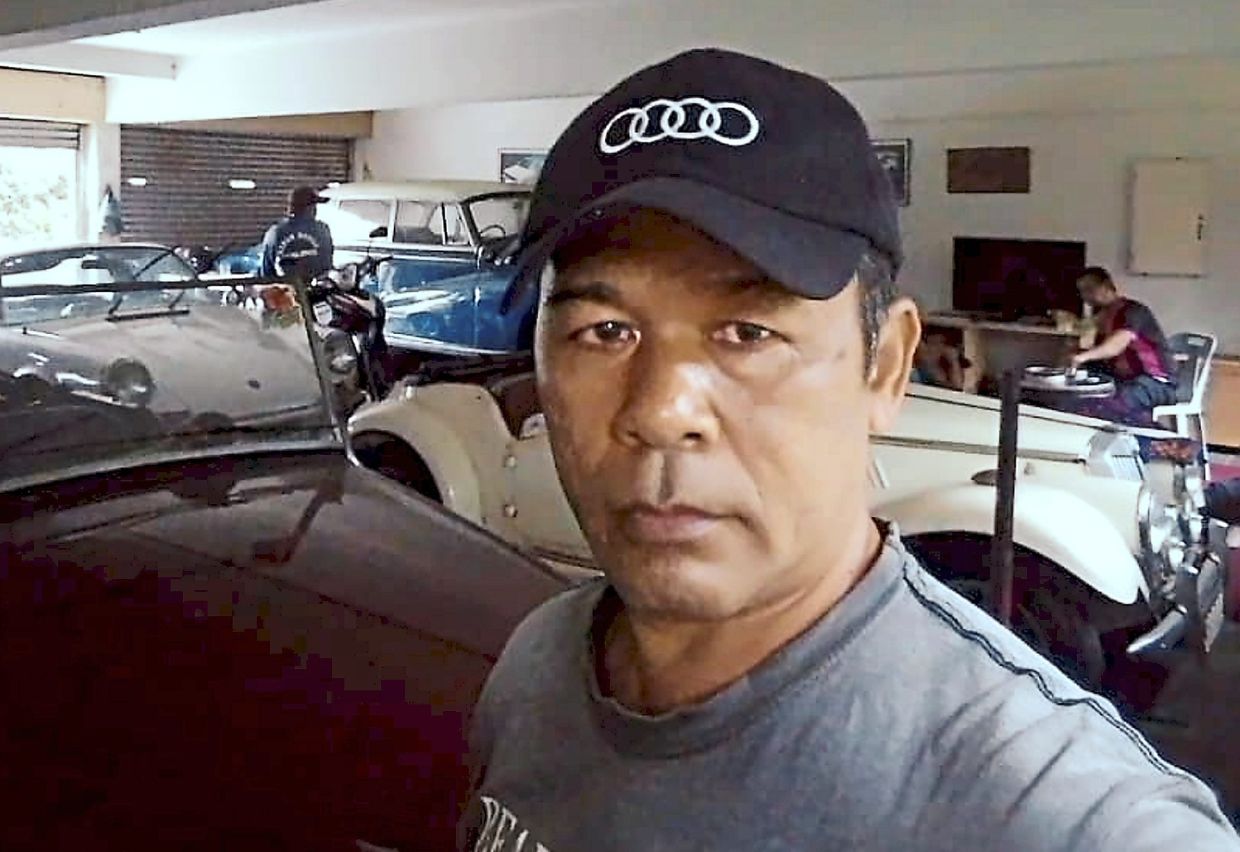 Zai: Villagers still continue the tradition of decorating their premises with the Jalur Gemilang.

“We informed the owners of the 400 residential and commercial units in the area about the competition and we expect to see all the properties being decorated with flags by the end of the month.

“This is our own initiative to keep the National Day spirit alive, especially during the Covid-19 pandemic where many people are in need of some hope and cheer,” he said, adding that officials from government agencies would be the judges for the competition.

Being unable to participate in a contest did not deter Kampung Sepakat Baru, Skudai resident Zai Ali, 60, from decorating his house and its surroundings with over 100 flags.

“Our village makes it a point to join the state competition every year, but the council decided against holding the contest this year.

“National Day for me is an important celebration as it is a reminder of the sacrifices our forefathers had to go through to achieve independence.

“Many residents in the village are still continuing the tradition of decorating their premises with flags,” he added.

For home decor enthusiast Juriah Abdullah, 49, the National Day month is an event she looks forward to as she can display her love for the country through her passion.

“I decorate my house each August without fail and have joined dozens of flag-raising competitions organised by the various government departments.

“This year, my motivation to display the Merdeka spirit has doubled up and I believe the Covid-19 pandemic has contributed to this.

“Many people have lost their jobs and some of their loved ones too due to the pandemic.

“The National Day this year is an important one for all Malaysians as we have gone through all kinds of challenges. It deserves to be celebrated,” she said.

The mother of four forked out about RM500 to buy flags and other decorations to put around her house in Taman Scientex in Pasir Gudang.

“I have to delay some of my preparations because of the rainy weather, but I am glad that I have been able to get most of the preparations done before Aug 31.

“I started buying the flags from as many shops as I could early on as I was afraid that they may not be available later.”

Juriah said she relied on her husband and children to help her decorate her premises and put up the flags.

Apart from the individuals and groups, government buildings, offices and official vehicles have also been decorated with the Jalur Gemilang.

Larkin Fire and Rescue Department station chief Suhaimi Abdul Jamal said that firemen from the station started putting up flags as well as banners around the building more than a week ago.

“We have also put up the Jalur Gemilang on all our vehicles. This is to show our patriotic spirit and love for our country as well as to bring more cheer in conjunction with the National Day month, especially as frontliners.

“The Covid-19 pandemic has not stopped us from showing our love and pride for the country.

“In fact, the Johor Fire and Rescue Department has also organised its fly the Jalur Gemilang competition to further liven up the Merdeka mood and spirit,” he said.

The station is among 33 fire and rescue stations statewide that are participating in the competition which ends on Sept 17.

The state government has also been continuing with its tradition of flying the Jalur Gemilang at the Causeway despite the closure of the Malaysia-Singapore border for over a year.

Johor Public Works, Infrastructure and Transportation Committee chairman Mohd Solihan Badri said flag poles with the Jalur Gemilang were hoisted at the Malaysian side of the Causeway.He said this was the usual practice every August, where the state government would put up the flags at the Causeway with the help of highway concessionaire Plus Malaysia Bhd.

“The Merdeka spirit remains very much alive among Johoreans.

“With the Jalur Gemilang flying high, it will enliven the mood and bring on a festive air at the Causeway area, which has been quiet because of the pandemic,” added Mohd Solihan. 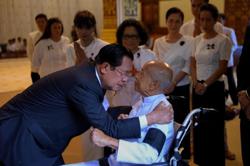 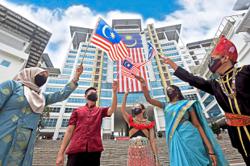