IT was the year 2000 and a massive food carnival became all the rave among everyone I knew.

I was in my late teens. All I knew then was that the length and breadth of Gurney Drive in Penang had to be closed to traffic for a record-breaking night.

If social media platforms had existed then, the phone browsers of Penangites would have been flooded as people stepped into overdrive for the event that featured hundreds of food stalls along the seafront promenade.

It was only later in my life that I got to know the event called Penang Merdeka International Food Carnival 2000 had actually earned Penang a place in the Malaysia Book of Records as the longest food presentation in the country ever.

Also, in my college days, I was among the multiracial participants who soaked in the carnival-like atmosphere at Penang Bon Odori Festival.

The spread of local hawker delights was a joy though I did not find the Japanese cultural performances my cup of tea.

And then finally, I became a rookie reporter in 2005 and covered Penang International Salon Gastronomique, or better known as Battle of the Chefs.

Only at that event did I learn the name of the mastermind behind all those wonderful tourism events that made Penang famous and played such an influence in my own formative years: Datuk Kee Phaik Cheen.

She was a cheery person. Eloquent. Decisive. Imaginative. Warm and paid attention to you when you had something to say to her.

Penang suffered a painful loss when she succumbed to Covid-19 last Wednesday after battling the virus for weeks in hospital.

She was 74. Kee was the lynchpin of Penang tourism development from the 1990s until 2004 when she decided to let younger blood lead the way.

She shored up the state’s reputation in heritage, culture, arts and food.

As one of Penang’s most influential politicians in the past few decades, Kee served four terms as Batu Uban assemblyman, from 1986 to 2004, and was the state’s culture, arts, tourism and women development committee chairman from 1990 until 2004.

Fondly known as Madam Kee in her inner circle and personal networks, she was a strong advocate of heritage conservation and gender equality.

In short, Kee was a woman ahead of her time, not to mention the iron lady of Gerakan.

Soon after news of her death went viral, tributes immediately poured in from personalities and old-timers in the political and tourism fraternities.

One of them was DAP’s Chong Eng, another stand-out female politician who faced Kee across the political divide at State Assembly sittings in the 90s.

“She was a giant to me then.

“Throughout her 14 years as state exco member for tourism, Penang gained popularity among local and foreign tourists through many major events.

“The bubbly politician always had tourism in her heart. She often wore beautiful batik dresses, promoting arts and culture in Penang.

“As the head of the women’s wing of Gerakan from 1985 to 2002, Kee stood out as the rose among the thorns in a male- dominated political scene then,” said Chong, who was the sole state Opposition member from 1995 to 1999.

“She was willing to delegate her authority to anyone whom she felt could deliver or perform the job for her.

“She brought Penang’s tourism allure to the international radar and initiated many tourism events,” he said.

Teng said at one point, Kee was even called the fairy godmother by many chefs for her passion in promoting Penang food.

“In 2004, Wall Street Journal addressed her as the godmother of Penang for her love of local food.”

Teng said Kee was also one of those from the Gerakan-led administration who fought for George Town to be recognised as a Unesco World Heritage site.

It was through this inscription in 2008 that the crown jewel of Penang was given a new lease of life, with the crowds flocking in to check out the intangible values of Penang’s heritage — aesthetics, architecture and historic importance.

It was during this time that we Penangites started to appreciate concepts like intangible assets, living heritage and urban regeneration.

Before that, George Town became a ghost town in the early 2000, soon after the repeal of Rent Control Act 1966.

With the recognition, we get to enjoy month-long annual festivals that celebrate the anniversary of George Town’s listing as a Unesco World Heritage site.

While Kee might not be identified with any iconic structures like how Komtar, Penang Bridge or the Free Industrial Zone are synonymous with the late Tun Dr Lim Chong Eu, her legacy lives on through the many cultural events and intangible assets.

From Kee, we get to learn the importance of preserving our heritage, arts, and food for the generations to come, as Penang has so much else to offer than just the sun, sea and sand. 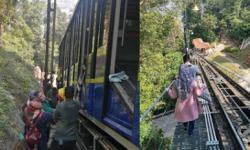