With many trying to derive an alternative income due to the Covid-19 pandemic, the city council has decided to issue permits to assist the small traders.

This was revealed at the city council’s full board meeting by acting deputy mayor Sharipah Marhaini Syed Ali.

“More are selling food by the roadside these days without a licence and we understand their predicament,” she said.

In issuing the licences to the traders, the city council has either allowed them to stay put and operate from where they are, or relocate them to another spot.

Only food, fruit and drink stalls are permitted.

Eighty-six permits were issued to traders to operate at Jalan Medan 9 while 27 were for those at Jalan Besar, PJS5.

“MBPJ will continue legalising traders throughout the city.

“We will relocate them to a proper spot. However, these traders will not be able to put up permanent structures or leave their items behind after business hours,” she said.

Sharipah Marhaini hoped MBPJ’s move would help them earn a living during these trying times.

“Many who were once in the M40 category have now fallen into the B40 category.

“Many have also lost their jobs.

“The council hopes to ease the burden of these people who have switched to selling food by the roadside,” Sharipah Marhaini said. 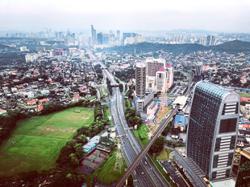