Tham hopes to create more comic strips as a way to raise funds for the White Flag movement.

A full-time artist and graphic designer has come up with an idea of creating a comic strip to help raise funds for a restaurant manager who lost his job during the Covid-19 pandemic.

Entitled “Diner Dash”, the eight-panel strip drawn by Jon Tham, 45, gives readers a picture of what this restaurant manager typically goes through on a busy day.

To garner contributions from donors for this fundraiser, Tham obtained permission to include the recipient’s bank account number in the comic strip so that cash donations could be channelled directly to the beneficiary.

Preferring to keep his subject anonymous in this interview for privacy’s sake, Tham found out about the restaurant manager’s plight from comedian Rizal Van Geyzel, who has now taken to selling pizza.

“Some of Rizal’s customers were ordering pizza from him and sending them to white-flag raisers.

“When he approached me to be a part of this donation activity, he gave me two numbers and one of them was this restaurant manager’s,” said Tham.

He discovered that the 58-year-old restaurant manager was renting a room and that the latter’s wife had also lost her job.

In a message, he wrote to Tham that he was facing difficulty buying essential goods and paying rent.

“I proposed the idea to him on July 11 and he was very responsive.

“The strip was completed the next day,” said Tham, a father of two.

Instead of focusing on the subject’s current financial situation, Tham chose to present him as a dedicated man in the food and beverage industry who went all out to please patrons through his service.

“We communicated for a week.

“In the process of getting to know him, I asked about the proudest moment in his career and he replied that it was customers’ compliments that made it all worthwhile for him.

“He also sent me reviews that were posted online by customers.

“All these inspired me to portray him as someone who was fully dedicated to his profession,” said Tham.

The comic strip, which was posted on Tham’s social media page, has collected more than RM1,200 in cash donations so far.

Someone also sent over a bag of groceries to the couple.

To dramatise the comic strip’s storyline, Tham said he drew from his own personal dining experience in restaurants to add depth.

He had also caricatured his own parents, who were featured as customers in the comic strip.

To ensure that his subject was agreeable to the way he was being portrayed, Tham sent him a copy before posting it online.

“He got back to me and said the comic strip showed exactly what he would go through on a busy day,” said Tham.

He also hopes to do more comic strips as a way to raise funds for the White Flag movement.

This is not his first attempt at fundraising for charity, though.

In 2019, he and Adrian Yao, a lecturer, cycled from Lumut in Perak to Bukit Rotan in Selangor to raise RM11,456 for street animals. 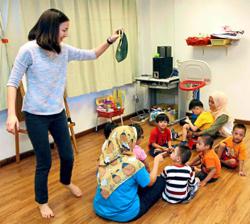