Eatery owners are not asking the government for handouts but want to engage it in a discussion, says Jeremy.

MALAYSIAN food and beverage operators and associations are urging the government and its related ministries to urgently engage and discuss ways to allow safe dine-ins, before it is too late.

They said the extended ban for dine-ins around the country was forcing many operators to throw in the towel and shut their businesses down.

Restaurant and Bistro Owners Association media adviser Jeremy Lim, representing five other F&B groups, said many of its members had experience and knowledge, which could be utilised to come up with a science and data-based solution.

“Allow public and private collaboration so we can provide a wider perspective and debate the next step.

“We are not asking for handouts, instead we need the government to be reasonable.

“The industry has been a significantly small contributor to new clusters because many businesses have been compliant,” he said in a virtual press conference.

Jeremy added that the groups and associations had a wide reach of contacts in other countries, which could help to provide input based on successes in those countries.

He added that up to 60% of food and beverage operators in the country could be forced to shut permanently in the next two months should the dine-in ban continue.

About 500,000 jobs and livelihoods were at stake as operators had less than two months of cash flow left, he added.

“A rough estimate of about 30% of some 200,000 food and beverage establishments in the country have already shut down since the start of the pandemic,” Jeremy said.

“Many more have already suspended their operations, but may have no other option but to close if the ban on dine-ins is not lifted.”

Jeremy added that these numbers did not account for the ecosystem that supported F&B establishments such as farmers, fisheries, suppliers and distributors.

The group added that the ban had negatively impacted farmers supplying their produce to local hotels and eateries.

They said producers and distributors have lost an entire sales channel during the many iterations of lockdowns and experienced an overall revenue contraction of between 40% and 60%.

“Many eateries have also experienced revenue contraction, some up to 90%.

“Many are reviewing their manpower cost to cover the exorbitant delivery commissions.

“With the ban, there is very little need for waiters, hostesses, bartenders and even kitchen crew are not spared due to the significantly reduced orders,” Jeremy said.

During the press conference, members also appealed to food delivery companies to allow for a rebate in merchant commission rates.

The groups are seeking the government’s immediate intervention to engage and regulate food delivery platforms as operators have no choice but to turn to these platforms with the ban.

Jeremy said they were requesting a rebate of less than 15% on commission rates from now until January.

“Currently, operators are paying about 30% upwards for each order to these companies, which is not only eating into any profit we are able to make, but many are unable to make enough to cover operating costs.

“On top of the commission rates, operators having to pay rental on premises, for utilities and other overhead costs,” he said.

Jeremy said the reduction in commission rates could be made up from the influx of users and orders.

“The government can also help to ensure that the welfare of riders are guarded as the review to lower our commission rates should not affect the rider’s abilities to earn a living,” he added.

“We had dine-in customers to rely on and used delivery services to expand our reach.

“We are asking these companies to have some empathy and reduce the rates for at least the next six months,” he said.

Collectively, the groups represent more than 1,200 food and beverage brands in the country with a workforce of tens of thousands of Malaysians. 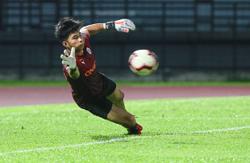