The pigeonhole cupboards used by kEATchen for its cloud kitchen business, comes in handy for contactless handover of food supplies for those in need. — Photos: SHAARI CHEMAT and RAJA FAISAL HISHAN/The Star

SINCE the Covid-19 pandemic started, Malaysians have come forward and shown their generous side.

Individuals and business entities are getting together to offer help to the less fortunate and those who have lost their jobs or whose income is badly hit when business dropped.

Many cannot afford to put food on the table due to these unforeseen events.

Kind-hearted individuals and organisations have come to their aid by offering them rice, flour, eggs and sugar among other essential foodstuff, through food banks set up in various places in Klang Valley.

StarMetro spoke to three individuals on how their establishments have provided food for those in need.

kEATchen, a food and beverage business based in Ara Damansara, Petaling Jaya is a cloud kitchen that started just a few weeks ago.

(Cloud kitchen is a business that prepares food for sale specifically for delivery). Volunteers comprising family members of kEATchen management help to prepare up to 400 bags of basic necessities each day for distribution.

Most people new to the business would not think of starting an initiative that provided food for the needy, but this was not the case with kEATchen.

Its chief operating officer Ivan Chan said the business became a charity overnight, although it was still very much an F&B business.

“The food bank idea came to me on May 30 after a childhood friend asked for some money to buy milk powder for his baby.

“He has been out of a job since the first movement control order and has not been able to find a job for over a year, ” he said.Chan said that it was then that he realised how badly some people were affected by the pandemic, even if they were not in the B40 category, and he decided to use part of his business premises as a temporary food bank.“I shared a post on social media to let people know what I wanted to do and before I knew it, people started sharing it in their chat groups.

“Since then, we have been giving out more than two tonnes of foodstuff every day with each bag comprising at least 1.5kg of rice, 1.5kg potatoes, 1kg cooking oil, 1kg sugar and 15 eggs, which should last three to four days for a family of four.”

Helping him distribute the items are volunteers, including employees and family members of kEATchen’s management.

According to Chan, many of the recipients are the hardcore poor living in people’s housing projects and low-cost flats who have to travel almost 10km to reach the temporary food bank.

“Seeing some people coming by in cars shows that even the middle-income group is financially stressed now, ” he said.

He added that kEATchen also distributed food items to the Taxi Drivers Welfare Association and people living in Kepong and Puchong.

“At times we have kind donors who send in extra items like biscuits, noodles and flour. We add them into each bag, ” said Chan.

Another item sometimes included, he said, was baby formula.He said it came to a point where there were long queues and overcrowding, so a new plan had to be implemented to distribute the items.

They follow the standard operating procedure strictly and regularly disinfect the collection area.

His team also monitors those who collect the foodstuff, via photographs and their MySejahtera check-in history which they impose as a pre-condition.

Chan said the food supplies were placed in pigeonholes made specially for food collection without having contact with anyone.

To help disperse the crowd, he reached out to Petaling Jaya MP Maria Chin Abdullah to set up additional collection points.

“We hand over 220 bags or about 1.5 tonnes of foodstuff each day to her office for distribution in Lembah Subang and Desa Mentari.

“We ourselves take care of those from other areas, which come to about 500 complete sets a day.”

His family and friends have helped out and he plans to continue the effort as long as the MCO is in force.

Shell Setia Alam retailer Suraya Saruwan started offering provisions in a food box at her petrol station a year ago.

It was the first of its kind at any petrol station. Suraya (right) handing over a bag of rice from a community food box to a member of the public at a petrol station.

The concept became a model for over 50 other stations and an inspiration for other businesses that replicated it to help those who were affected financially.

In the early stages, after non-governmental organisation Volunteer’s Unite approached her station to start a food bank, Suraya engaged with residents in the community to help sustain the initiative.

“Nowadays, I rarely need to replenish the items from my own supply.

“In fact, when we have a surplus of food, we send them to the elderly and the disabled as well as to welfare homes nearby, ” she said.

She highlighted that they also delivered to those who did not have transport to get to the petrol station.

This, she said, was made possible by engaging with the management of apartments who identify suitable recipients.

Suraya said other petrol stations were doing the same but focused on welfare homes.

“At this station, we limit each person taking the food to three items but we give the elderly more basic necessities so they won’t need to come out so much during the pandemic.”

She said many at the Akasia and Semarak apartments lived alone or without their children.

“We also receive non-food items from donors, including baby diapers.

“Someone even left a baby car seat by our food box that was in good condition. It quickly found a new owner who had recently given birth.”

According to Suraya, more people are showing up to pick up things from the food box since the latest MCO which started on June 1.

“It is not surprising because many people have had to take a pay cut, ” she noted.

Volunteers Unite founder Alfred Samuel Mariyaras said the food boxes around Shah Alam, Klang, Subang Jaya and Petaling Jaya were actively being utilised and were normally able to meet the needs of the beneficiaries.

Alfred, who helps top up community food boxes with products sourced from corporations or other non-governmental organisations such as Kembara Kitchen, said it was heartening to see support from them.

“It is also good to see the number of food boxes growing, not just among the Shell petrol stations, ” he added.

Aside from providing humanitarian aid to disaster-stricken areas when necessary, Volunteers Unite is currently focusing on providing food aid to the needy throughout the pandemic, including welfare homes.

On a normal day before the pandemic, The Lost Food Project (TLFP) enlisted the help of over 100 volunteers to save food from ending up in landfills.

It diverted food to the hungry in Kuala Lumpur, Selangor and Johor.

In May alone, TLFP distributed about 60 tonnes of food, shared between 67 charity organisations. 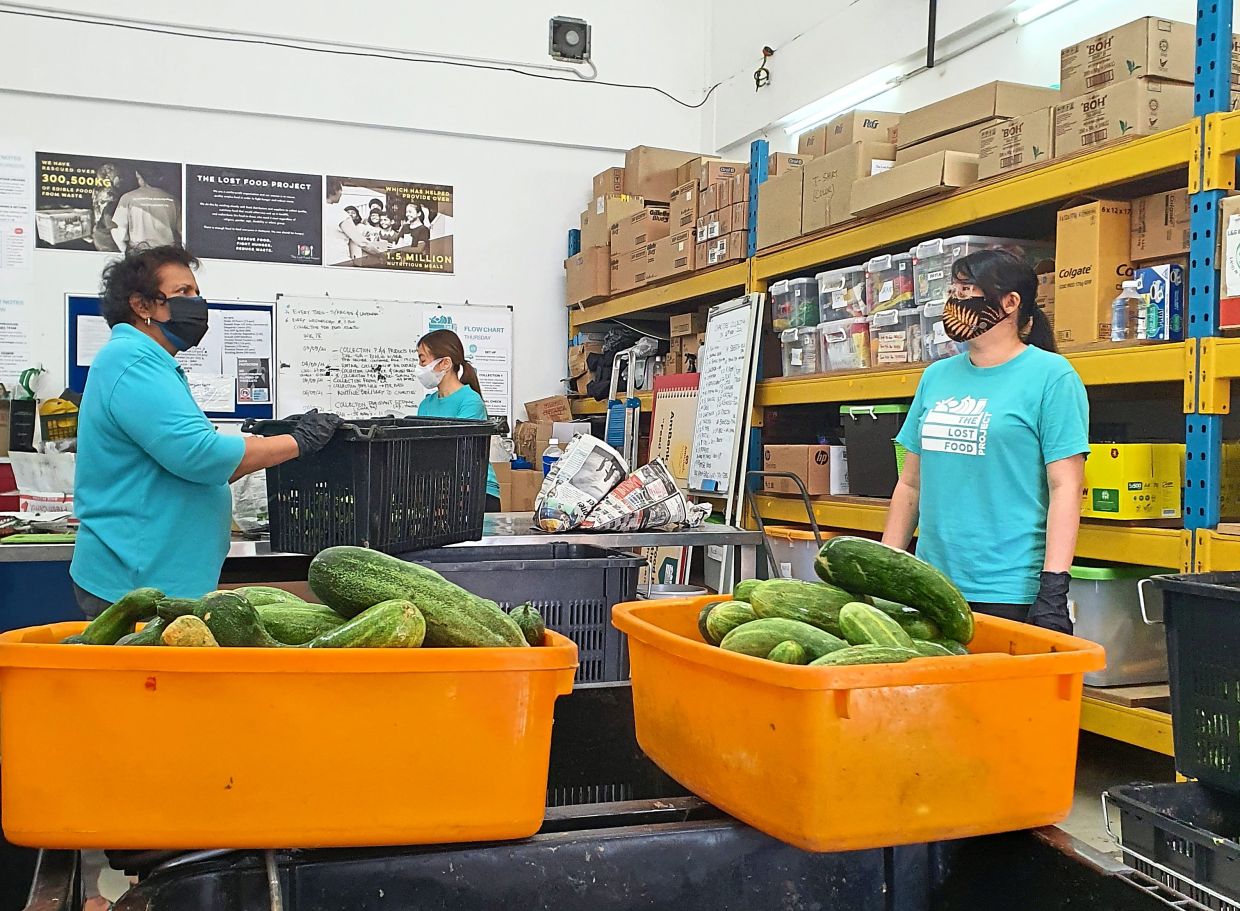 Since June 1, only about 20 volunteers have been on the ground to sort through tonnes of food and ensure they are fit for human consumption before packing them for distribution.

“Much of the food is actually still of high quality, but the vendors are not able to sell them on the particular day, ” said TLFP general manager Mohd Syazwan Mokhtar.

Items of lower quality and unsuitable for people will be sent to its composting partner or the National Zoo to feed the animals.

Mohd Syazwan said that despite the amount of food collected by TLFP, food was scarce for the long list of charities waiting to be included as beneficiaries.

“Our operations are mainly supported through donations from the public and corporate sector, and we try to deliver food to the charities daily.

“We see ourselves as supporters of an ecosystem that is already quite strong, by supplying charities and NGOs with food or preparing ready cooked meals, ” he said.

He added that TLFP also distributed food to B40 households in Lembah Pantai, Batu and Setiawangsa, in Kuala Lumpur, as well as in Klang and Petaling Jaya in Selangor.”

Mohd Syazwan said TLFP was a charity organisation and a logistics NGO, which was like a hub or middleman between the industry players and the beneficiaries, while dealing with surplus goods directly from retailers, suppliers or even manufacturers.

“We also work with wholesale markets such as Pasar Borong Kuala Lumpur, which is our biggest contributor for fresh vegetables every month.

“I don’t think there is ever going to be enough supply as demand is always high. Many people are struggling, even before the MCO, ” he said.

“In February and March, we received between 80 and 100 tonnes of supplies a month from the wholesale market, but it dropped to 50 tonnes in April and 40 tonnes in May, also due to factors of supply from farms.”

Mohd Syazwan said TLFP had received distress calls for aid in recent weeks and was helping to distribute non-food products as well.

“We have seen our beneficiary base increase exponentially since last year and there are definitely more people out there in need.”

He added that TLFP was fortunate to be able to make up for it when manufacturers provide more non-fresh food alternatives during the period.

“One of the blessings to come out of this pandemic is seeing people willing to help in a crisis, ” he said.

Food for the needy provided by individuals and organisations