POLICE are going all out to ensure that standard operating procedures (SOP) are being observed in all shops and offices listed under the essential services during the lockdown.

In Penang, an employer was fined RM10,000 on the first day of the lockdown for breaching the 60% worker capacity rule.

George Town OCPD Asst Comm Soffian Santong said the employer in a private firm had allowed more than 60% of the staff to work in the office.

The police teams would ensure that the work from home (WFH) policy requiring 80% of employees in the public sector and 40% in the private sector to operate from home would be strictly adhered to. 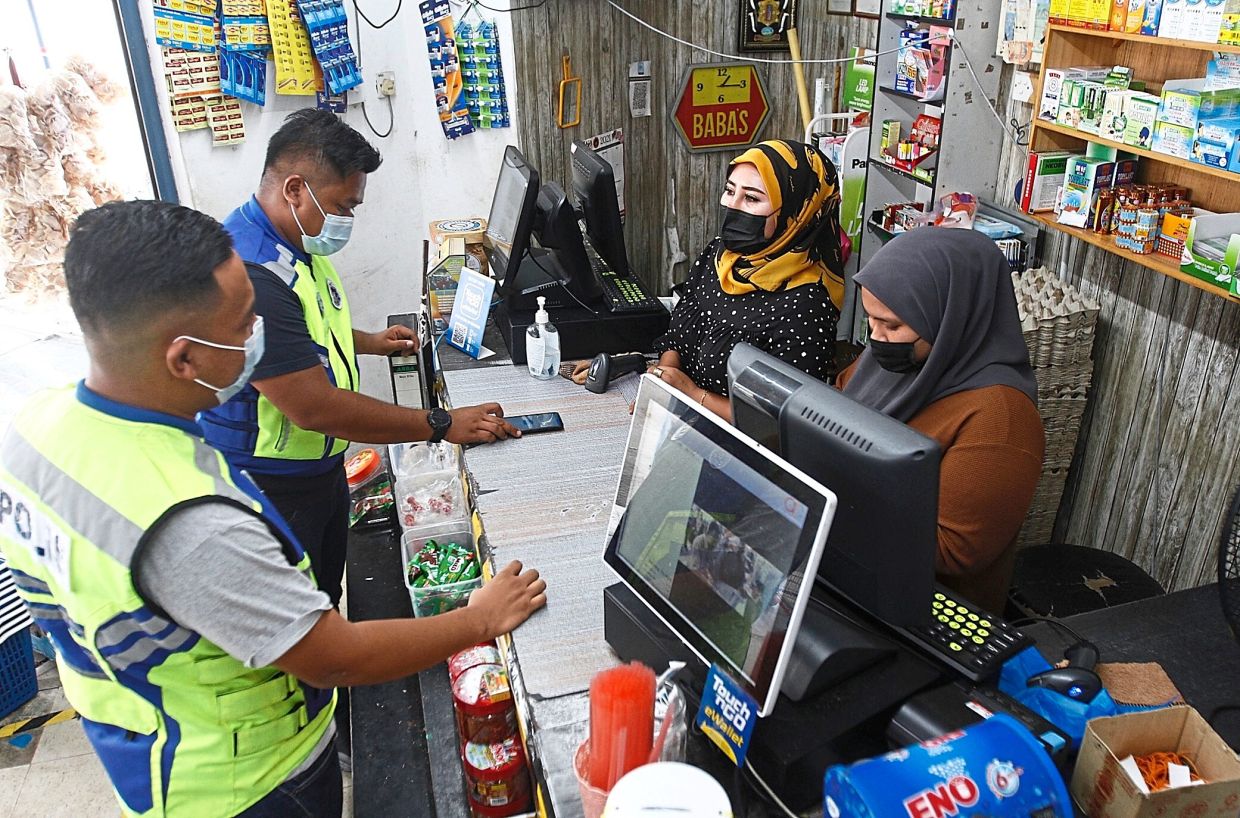 Policemen checking the MySejahtera app on the smartphone belonging to a worker at a grocery store in Tasek Gelugor, Penang. — ZHAFARAN NASIB and LIM BENG TATT/The Star

“This is one of the strategies to flatten the Covid-19 curve. The public must comply with all SOP during these two weeks.

“Stay home and only go out if necessary, ” he said.

At roadblocks, he said several motorists were asked to turn back as their professions were not listed under the essential businesses and industries.

“A majority of the motorists and motorcyclists were allowed to pass through police roadblocks as they produced the necessary documents.

“The rest were asked to turn back as we explained to them that the sector they are in is not listed as essential under the new ruling.

“We will conduct a thorough check at every police roadblock to cut off unnecessary movements, ” he said at the police roadblock mounted along the Tun Dr Lim Chong Eu Expressway near Penang Bridge. A police team screening customers at a hardware store in Tasek Gelugor, Penang.

ACP Soffian said two additional mobile roadblocks would be set up in the afternoon, and another two at night in the district.

On Penang mainland, motorists were able to show valid documents and travel letters before passing the police roadblock at the Butterworth-Kulim Expressway (BKE).

Central Seberang Prai OCPD Asst Comm Shafee Abd Samad said the motorists complied with the regulations, adding that there were no confusion on the lockdown.

“So far so good, the situation is under control, ” he said.

“We are conducting stringent checks on motorists and motorcyclists at roadblocks mounted in the district. “The recent spike of Covid-19 cases has served as a reminder and increased awareness among the public that the virus should not be taken lightly, ” he said.

ACP Noorzainy said police would not hesitate to act if the public tried to cross state or district borders without proper documents.

Penang police chief Comm Datuk Sahabudin Abd Manan said there were less traffic on the road during the first day of nationwide lockdown.

“The traffic was smooth but a bit congested during peak hours in the morning. It was also the same in the evening rush hour, ” he said.