Geh’s coffin being sprayed with disinfectant at the crematorium. — LIM BENG TATT/The Star

RIGHT till he could no longer do it, Michael Geh remained a workaholic. He was replying to messages and taking calls even while at the quarantine centre in Penang.

He did not tell people on the phone that he was Covid-19 positive, not wanting to worry them.

His wife Celia Fung, 55, said her husband was a wonderful man who always wanted to help others and worked until the very end.

“He made sure to help others, even disregarding his health, hardly sleeping and even hoping to be able to go back to work.

“He anxiously waited for his test results, hoping it was negative so he could go back to work.

“When he tested positive, he continued his work at the quarantine centre, ” she said.

Fung said Geh was a loving husband and father who did not want to worry anyone when he was intubated.

Geh, 57, was one of the most respected property consultants in the region.

He was a regular at property conferences around the world and was the immediate past president of the Malaysian chapter of International Real Estate Federation (FIABCI).

People knew him as ‘everybody’s friend’.

He breathed his last at 1.45pm on Saturday after developing complications at Penang Hospital. He was admitted to the intensive care unit on May 9.

Geh’s sister Linda said that his symptoms were mild at first.

“He was lucky to be treated early and was in stable condition until Tuesday (May 11).

“Then the virus attacked his blood and we were told the doctors advised intubation as his oxygen levels were low, ” she said.

Before Geh was intubated, he called and spoke to family members and close friends.

“He was told by doctors that when a patient is intubated, the chance of survival is 50-50, but he did not try to scare us and remained reassuring, ” said Linda.

“I am sure he did not expect it to be the end of the road for him.”

Linda said they suspected he caught the virus during a work trip to Kuala Lumpur.

“He really loved his job. Even during the pandemic, he still worked.

“He attended meetings to help revive the property market.

“What has happened has happened. We hope others take the virus seriously as we do not want more lives lost, ” she said.

His family, crying inconsolably, watched from more than 30m away as the van arrived with Geh’s body in a silvery-grey coffin.

Undertakers and pallbearers wore personal protective equipment. A man sprayed disinfectant as the coffin was wheeled to the cremation chamber. No one else was allowed near.

In a tribute on social media, Geh’s daughter Nicole, 25, described him as the “coolest and most awesome dad I could ever ask for”.

He was a chartered valuation surveyor, a member of the Royal Institution of Chartered Surveyors (UK).

Geh authored two property investment guide books and contributed to many business magazines as well as property and news portals.

He was the son of the late Geh Chong Keat who was an MP in Penang from 1958 to 1964. There are two roads in Tanjung Bungah named after Chong Keat.

Geh is survived by Fung and Nicole. 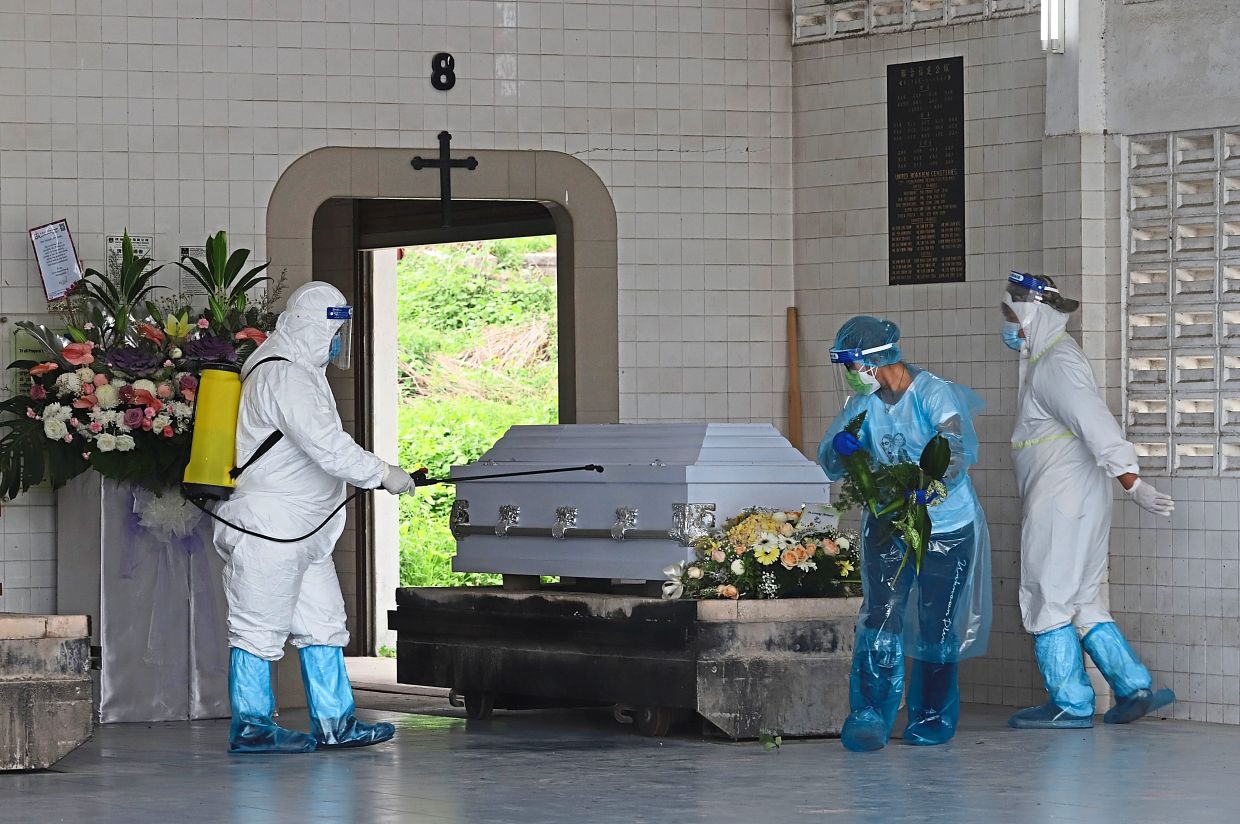 Geh’s coffin being sprayed with disinfectant at the crematorium. — LIM BENG TATT/The Star