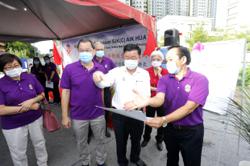 WITH a new four-storey block, schooling for some 900 pupils in SJK(C) Han Chiang in Penang will switch from two sessions to just one in the morning next year.

The primary school’s board chairman Datuk Seri Ooi Soo Hing said construction on the project costing RM6.5mil has started and will be completed by November. “The new four-storey block with 22 classrooms will extend from an existing three-storey block.

“With more classrooms, pupils no longer need to be staggered in morning and afternoon sessions.

“The block will be completed in November to welcome all pupils in the mornings next year, ” he said after laying the foundation stone during a ceremony in the school on Saturday.

The new block will include a covered basketball court besides extra-wide walkways and landscaping.

“There are several Chinese schools in Penang that are preparing for school establishment and relocation.

“Educational development is the responsibility of Federal Government, but when some Chinese schools lack funding, the state government has also tried its best to allocate land and funds to them.

Chow said as for the remaining funds, he hoped others will support the school.

He said it was part of the state’s efforts to enhance education to nurture better Penangites and ensure that all children received the opportunity to get an education. An artist’s impression of the new four-storey block.

An artist’s impression of the main foyer area with a basketball court.