Villagers in Air Masin and Kukup picking up rubbish washed up from the sea.

A comprehensive sewage and garbage catchment system is needed to solve the longstanding rubbish problem at Air Masin and Kukup in Pontian.

Tanjung Piai MP Datuk Seri Dr Wee Jeck Seng said rubbish being washed onto the shore at both villages was a problem, especially as Air Masin and Kukup were the district’s tourist spots.

“All this while, all sorts of rubbish have washed up to the shores here and then they get washed away by the sea again during high tide.

“The cycle has been going on for years without a proper solution, ” he said.

It was not to say that the locals and tourists were to blame for this problem, he said, but the villages’ geographical location resulted in rubbish from the sea washing up at Air Masin and Kukup.

Wee, who is also Deputy Primary Industries and Commodities Minister, said the villages were still not equipped with a proper sewage system.

Previously, the government had approved a RM30mil allocation to build a sanitary and garbage catchment system there.

However, the project was cancelled when the Pakatan Harapan government took over, he said.

“Now that we are the government again, I have followed up on the matter with Environment and Water Minister Datuk Seri Tuan Ibrahim Tuan Man twice.

“Two months ago, a team from his ministry agreed to visit the area and conduct a study to determine the best way to carry out the project.

villages still stand on wooden foundations while others have been paved with concrete, ” he elaborated.

They would then compile the findings and propose the project for consideration under the 12th Malaysia Plan, he added.

Wee hoped that once completed, the project would be able to solve the sewage and rubbish problems there.

“This will also give locals and tourists a more positive experience when they visit the area, ” he said. — By YEE XIANG YUN 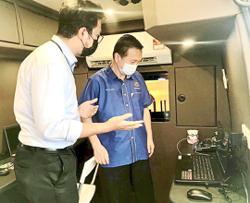