Suited up: A volunteer with Six League ready to disinfect a premises as part of the NGO’s charity work.

SIX years ago, a group of six friends decided to start a charity foundation to feed the poor.

They started off with helping old folks homes, associations and temples by preparing 1,000 food packs and rice for distribution twice a year.

“We received plenty of support from the community to help the needy.

“During the first year, we supplied 200 food packs and essential items and after that, we capped it at 1,000.”

He said it was only last year that the non-governmental organisation (NGO) was registered as Six League, as it had operated on an ad hoc basis prior to that with no official name.

“We did not really think about registering as an NGO because it was too troublesome to appoint a chairman and execute other formalities.

“But a close friend advised us to form one officially, and so we did, ” he explained. All equipment needed for a sanitisation exercise packed onto the Six League pickup truck.

The objective of Six League is simple – to help as many people in need as possible.

Amid the Covid-19 pandemic, the organisation took things up a notch by offering free sanitisation services to schools, places of worship, police stations, apartment complexes, morning and night market sites as well as residences and commercial areas.

He urged those living in people’s housing projects (PPR) to contact Six League for sanitisation exercises on their premises.

“PPR flats will be a priority if they need our help.

“There was one company that had asked for RM20,000 to carry out disinfection at a condominium (which was unaffordable).

“Through the MP’s office, our colleagues did some research and we collaborated to find the best solution, which was to buy the sanitising equipment, help sanitise these public places for free and provide jobs to people who have lost their income during the pandemic, ” said Hooi at the launch of the Six League Covid-19 Sanitisation Programme at its premises in Taman Desa. Hooi says PPR flats will be a priority if they need our help to sanitise their premises.

In attendance were Kok, Six League chairman Fon Ah Meng and members of the association.

To carry out sanitisation activities, Hooi said they bought a used pickup truck, which displayed their contact numbers.

He said those who carried out the sanitisation were paid up to RM50 a day.

“Although we are an NGO, we will pay volunteers each day they are on duty because we want to create jobs for the community and help them (those who have lost means of income).

“We helped to sanitise several shoplots and condominiums a few weeks ago, all in Taman Desa, ” he added.

Hooi urged people, who have lost their jobs, to come forward to volunteer with Six League for the sanitisation operation.

“We have only eight people now and there will be more places to sanitise.”

He said Six League would also conduct awareness projects on how people and school administrations could sanitise their own premises.

“I think in the last six months especially, the pandemic has made the whole country more aware (of the importance of sanitisation), ” he said. Hooi said a budget had been allocated for this latest mission to help the community around them.

He said anyone could volunteer for the sanitisation activity but they would have to be strong enough to carry the heavy equipment over an extended period of time.

“The sanitisation equipment weighs about 14kg with the liquid inside, and the person has to carry that and walk about sanitising an area.

“Our current volunteers are in their 30s and 40s, ” he elaborated, and said the aim was to sanitise three premises in a day.

He added that the NGO welcomed collaboration with others.

Aside from the free sanitisation services, Six League has given out 1,000 packs of 2kg rice and 1,000 bottles of cooking oil to needy families in the last two months.

The NGO is funded through donations, including from regular benefactors.

Meanwhile, Kok said condo managements and schools that needed help with sanitising the premises could contact her office.

“A condominium’s joint management body said it was quoted a price of RM8,000 to disinfect its premises, ” she told reporters at the launch.

Kok also urged surau committees to contact her office to arrange for sanitisation exercises to be carried out.

Volunteering for a good cause

Businessman GP Sivam, 57, has been volunteering in sanitisation operations at schools, condominiums and various public places carried out by Kok’s office over the past year.

“We have done free sanitisation at seven schools in Seputeh.

“All of us want the Covid-19 cases to reduce, so we must do what we can in our spare time to help people who need it because sanitisation is expensive. Sivam has been helping in sanitisation operations carried out by the Seputeh MP’s office.

For Jeremy T. (not his real name), 41, it means sacrificing his time of rest but it is worth it. He has been volunteering on Six League’s charitable projects for the past year.

He runs his own business in the day then helps out with the disinfection exercises from 10pm to 2am.

“We do this at night at shoplots and commercial areas around Taman Danau because there are fewer people around those hours.

“The equipment is heavy on our backs, but we feel happy that we can help, ” he told StarMetro.

“If I feel rushed, I won’t do a good job. I have roped in my friends too, and we have gone beyond Klang Valley to as far as Penang.”

He opined that it was important to expose his young staff to charity work.

“They need to see that many people lost their jobs because of the pandemic, ” he said, adding that he had even taken his staff to his friend’s restaurant to teach them how to cook simple meals at home.

“I feel my life is going smoothly at the moment, so I will continue to help people who need my help, ” said Jeremy.

Another Six League volunteer AM Lee (not his real name), 38, said there were so many who needed help with disinfecting their premises in addition to food aid.

“It is humbling to be able to do this and make a difference in another person’s life, ” said the IT technician who learned about the NGO’s work from his friend. 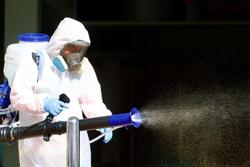