MEETING the Orang Seletar or Orang Laut tribe near Johor Baru is indeed an enriching experience.

They are down-to-earth and sincere.

Talking to the Orang Seletar, one can feel and see the difficult life they lead.

For hundreds of years, the sea nomads lived on traditional longboats known as perahu pekajang.

They roamed freely in the waters of Johor and Singapore and the sea was their playground as well as source of livelihood.

The boat was their home and the venue for weddings and births.

Only when there is death do the people set foot on land, to bury the deceased.

In the late 1960s, the Orang Asli Affairs Department (JHEOA) relocated them permanently to villages set up for them.

Orang Seletar are one of the 18 Orang Asli ethnic groups in Malaysia and are also considered part of the Orang Laut natives of the Straits of Johor separating Singapore and peninsular Malaysia.

Their interests are looked after by the Department of Orang Asli Development (Jakoa).

Kampung Bakar Baru Perling villager Tanai Tom, 62, said life had not been easy for them since the start of a multibillion ringgit waterfront development project in 2013 in Iskandar Malaysia.

“Our livelihood has been affected; we are getting less catch from the sea since the start of the project located barely 2km from our village, ” said the grandmother of 10.

Tanai said land reclamation damaged mangrove plants on the riverbanks, which were the sanctuary of various animals, including mangrove mud crabs, shellfish and edible snails.

“In the good old days before the land reclamation works took place, we could easily catch them in the mangrove areas just opposite our village, ” she said.

Tanai recalled that villagers used to get around 100kg of lokan, a type of clam, that is abundant in seafront mud about 10 years ago.

“Now they are disappearing.”

Her son, Anjang Lingi, said the villagers used to fish in the waters off Danga Bay but now have to travel to Port of Tanjung Pelepas (PTP) in Gelang Patah by boat about 14km from Kampung Bakar Baru Perling, to fish.

“Now, it is rare for me to catch even 1kg of fish and it will take me hours to get that amount if I were to go to Danga Bay to fish, ” he said.

On weekends, anglers visit the village

to buy fish bait like wat pasir (mud worms) and wat bakau (mangrove worms), which is another source of income for the villagers.

“The worms were abundant in the nearby Lido Beach but water pollution in the Straits of Johor depleted the worm population, ” Anjang, 42, said.

He said wat pasir was sold for RM60 per kilogramme while wat bakau fetched RM100.

Kampung Bakar Baru Perling village head Tok Batin Kais Tee, 58, said that a decade ago, the mangrove crabs were sold for about RM12 per kilogramme during a bountiful harvest.

He noted that the price had now shot to between RM40 and RM50.

“Today’s price is good. But we would be lucky if we were able to catch even one or two kilogrammes of crabs after spending hours at sea, ” he said.

Kais urged both the Federal and Johor governments to look into the plight of the Orang Seletar who were finding it hard to adapt to progress and development taking place in Iskandar Malaysia.

“Most of us depend on the sea for our livelihood but the catch is getting less and less every day.”

He said the villagers could hardly make ends meet with their income as prices of basic goods in Johor Baru were high.

He added that they had to collect scrap metal, boxes and tin cans to be sold to scrap collectors in order to supplement their income.

Rolen Oni, 40, said their catch started to dwindle about a decade ago due to land reclamation activities.

“Life is getting harder for us but we have no choice as we depend on the sea for our livelihood, ’’ he said.

The route used by fishermen to get across the strait to the open sea, he said, had become more narrow after the land reclamation.

Rolen said the site where the project now stood was rich in marine life before the land reclamation.

He pointed out that fishermen now had to go almost up to the Singapore border to fish, acknowledging that it could be risky as sometimes choppy waters and strong waves might push them over the border without them realising it.

“The waters in the Singapore side are now bountiful with marine life especially sea prawns, ikan kurau (threadfin) and senangin (four-finger threadfin), ’’ he noted.

“I spend about RM80 on fuel and only make around RM200 after fishing three to four hours, which is half of what I could earn a decade ago, ’’ he said.

Suni said he had to go to Pulau Merambong, about 20km from the village, to fish as waters near his village were no longer rich with marine life.

He said that just like the more than 150 fishermen in his village, he had no choice but to continue going out to fish as this was the only job he could do to provide for his family.

Ng Cheng Siong, 47, said the water quality of Sungai Pendas, which leads to the sea, has deteriorated and turned brackish.

The fisherman said his fellow villagers used to go to the area to look for ikan sembilang laut (saltwater catfish), sea prawns, mud crabs, and edible snails like siput gonggong and siput sedut.

Mangrove swamps, which are natural breeding grounds for the marine creatures along the coastal line, have been cleared and led to a decline in the fisherman’s catch.

“We have no choice but to go to waters near the port area as those are rich with marine life, although we know it is risky as there are passing vessels, ’’ said Ng.

He said the on-going sand-digging activities on the other side of the border also resulted in sediments accumulating at nearby Pulau Merambong in Malaysian waters.

“The water on the Singapore side is clearer compared to our waters, attracting more marine life.

“We hope the Federal and state governments can look into our woes as we badly need their assistance to improve our livelihood, ’’ said Ng. 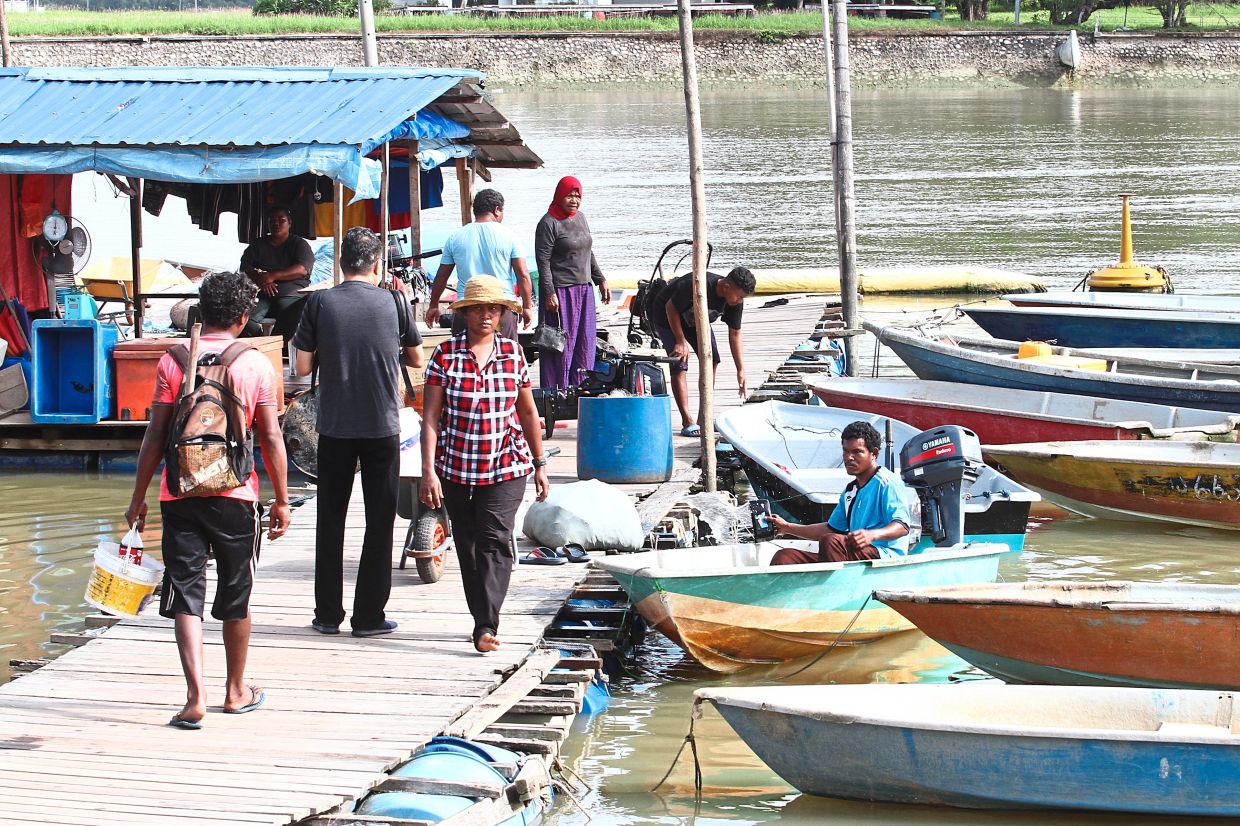 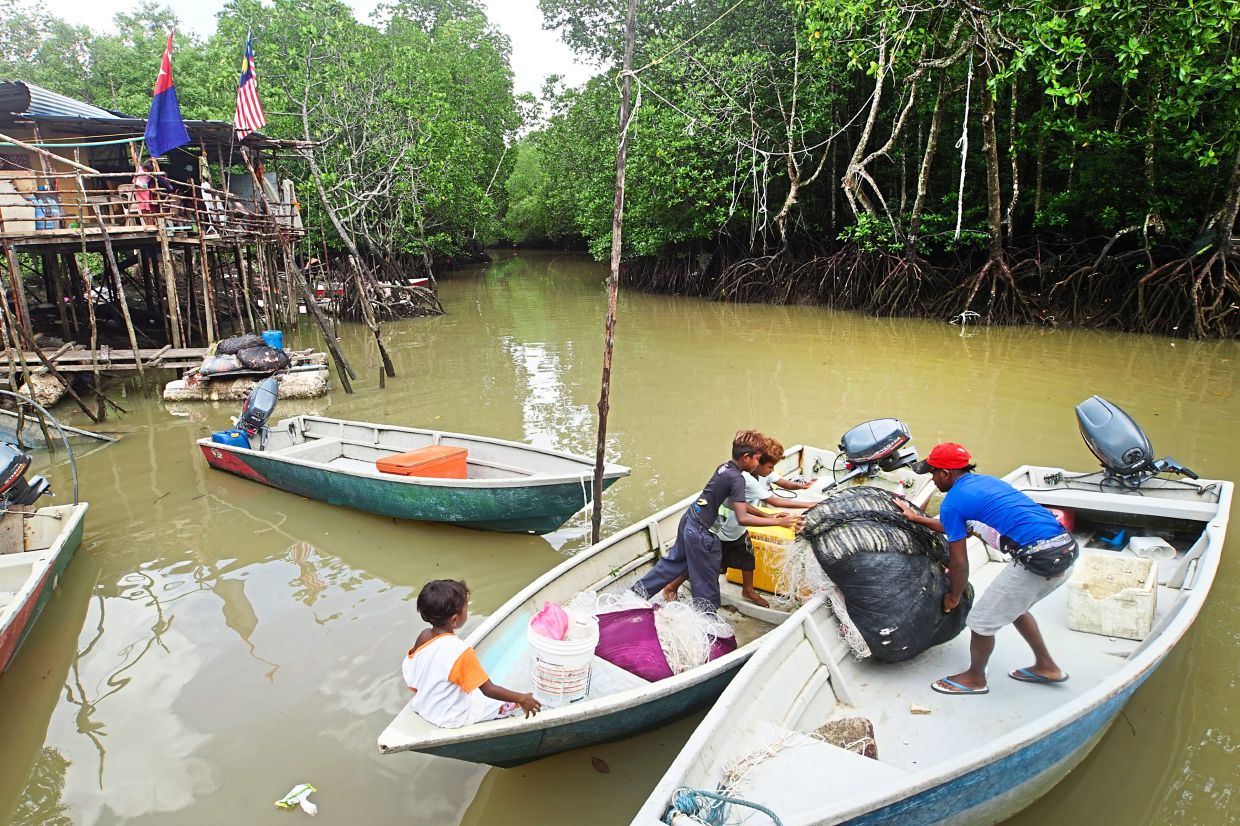 Man Othman unloading his catch of the day, ikan bandang (milk fish), at the jetty of Kampung Bakar Batu Perling.

Ng: Mangrove swamps have been cleared away for development.

Kais urges the Federal and Johor governments to look into the plight of Orang Seletar.

Anjang: Villagers have to travel further from their village to fish.

Tanai: Livelihood has been affected since the start of the waterfront development project in 2013.

Rolen: Fishermen have to continue fishing as they do not know any other trade.