ONE April morning last year, Selangor resident Khairul, 45, woke up to find the taps in his high-rise apartment unit were dry.

He did not worry too much, thinking it was a one-time incident. It happened again in July, and later in September, where water supply was cut for six long days.

Like many other Klang Valley residents, he was fed up with the frequent water disruption as it was a major inconvenience.

Anticipating more disruptions in the future, he forked out some RM300 to buy water containers in early October.

“The unscheduled water cut was becoming like a monthly affair.

“For a country that claims to be developed, having this many water disruptions is truly embarrassing, ” said Khairul.

The topic of water disruption is topmost in every Klang Valley resident’s mind as they have suffered a lot due to water cuts over many years. A resident stocking up on water from a static tank. — Filepic

“We found at least 16 incidents of burst pipes and nine contamination at a water source.

“There was also an incident of drop in water level at a pond which affected some 30,500 account holders in the Petaling district, ” she said.

Saral said the string of water cuts in Klang Valley last year raised doubts among consumers if they were paying a fair price to service operators.

“They are wondering if proper infrastructure are in place to deal with such incidents in future.

“Some are also asking if they can get their money back for unsatisfactory service, ” she said, adding that the public were unsure where to address these concerns.

Suhakam commissioner Datuk Mah Weng Kwai said the frequent disruptions revealed the divide among the rich and poor in Malaysia.

“Each time a water cut happens, we often see long queues of people getting water at low-cost housing areas, but not at richer areas.

“This is because houses in richer neighbourhoods are better equipped to deal with prolonged disruptions.

“They have big tanks to store water and some even have a system to harvest rainwater, ” he said.

Mah said this had watered seeds of discontent among the poor, especially flat dwellers who had to make frequent trips to designated taps to collect water.

The implementation of the movement control order at the time, he said, intensified their anger.

“They were constantly told to wash their hands and shower regularly, but there was no water for them to do so, ” he said.

Mah also said that unscheduled water cuts could expose supply operators to a strategic litigation in court by customers.

“As a consumer, I signed a contract that is binding between myself and the operator.

“If the supply is disrupted, then I am within my rights to take the operator to court, ” said Mah.

The former Court of Appeal judge said courts in Malaysia were slow to recognise cases of public interest.

“But this perspective has now changed.

“The court will consider whether you have been affected to the extent that you can bring an action for yourself and to represent the general public, ” he said.

Mah added that quick enforcement was vital to bring water polluters to justice.

“These individuals cannot hide behind their corporate shield and blame their workers for the pollution.

“Because at the end of the day, if their company makes a profit, they stand to reap the rewards, ” he said.

Mah added that operators could also seek damages from polluters to recoup their losses.

“This is because whatever fine imposed by the court will go towards the government’s coffer, and not the operator, ” he said.

Ranhill SAJ Sdn Bhd is a subsidiary of Ranhill Utilities Bhd, a water supply company that is involved in treatment and distribution of water in Johor.

He said operators often had to work round the clock, often with little rest, to restore the service.

“We will try our best to address the frustration among customers, but we have our limitations too, ” he explained. 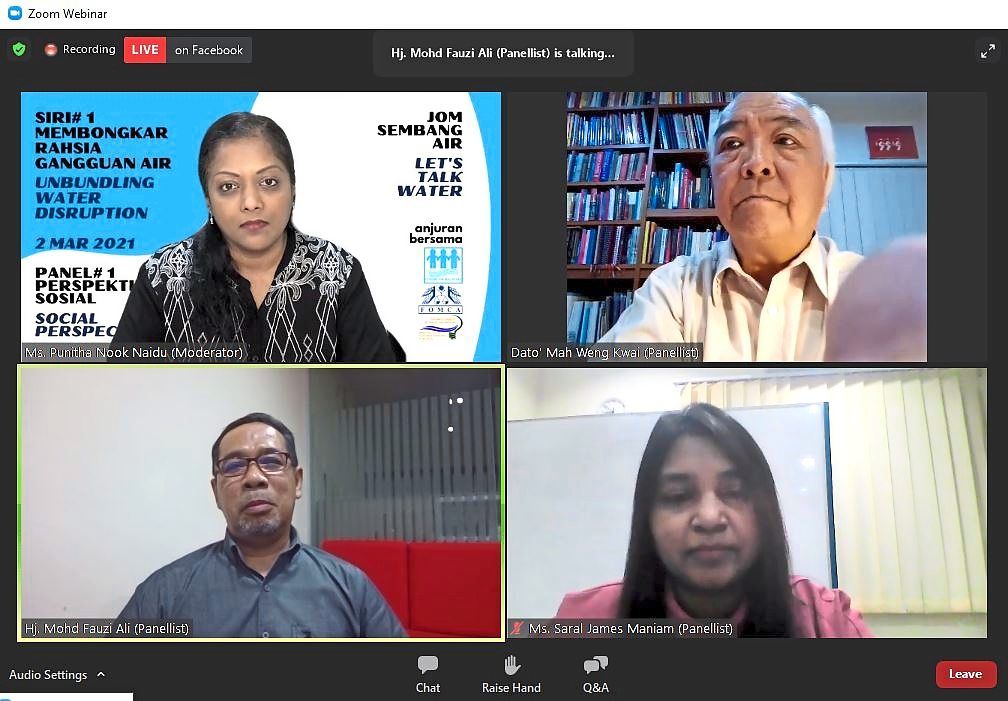 Mohd Fauzi said distribution to affected areas during disruption periods were not without logistical issues.

He said tanker drivers who fetched water before they were mobilised to affected areas were normally under immense stress as they had to work tirelessly driving back and forth.

“Once they arrive, they have to face irate customers who may not be kind with their words, ” he said, adding that it was important for drivers to keep their emotions in check to avoid altercations with customers.

Mohd Fauzi also said that some operators in Malaysia had not revised their water tariff since the 1980s.

This, he said, was having an impact on their ability to provide quality service.

“This means that the tariff now is actually much lower than what it is supposed to be.

“If we take into account the average annual inflation of 3%, it amounts to a very high cost, ” he said, adding that any tariff revision must be brought to the National Water Service Commission (SPAN) for review.

Mohd Fauzi, who has over 25 years of experience in the industry, said it was unfair to compare the tariff in Malaysia to other countries.

“This is because the cost of treatment varies according to the water source.

“The quality of water bodies in this country is low, and that’s driving the treatment cost up, ” he said.

He said many rivers near settlements could not be treated, thus forcing operators to source water from farther locations, which further increased the cost in terms of distribution.

While Mohd Fauzi said water supplied to consumers must comply with the standards set by the Health Ministry, Saral said consumers were reluctant to pay more unless operators could assure them of no more disruptions in future.

Mah said operators could increase their tariffs, provided they publicly disclosed how the funds were used.

“If the money is to go towards improving the infrastructure and repairing old pipes, it is acceptable to increase the tariffs, ” he said.

He, however, added that it would be unrealistic for consumers to expect zero disruptions, as operators have to deal with unforeseen circumstances outside of their control, such as a dry spell.

Mah, however, said consumers must use water responsibly and prepare for emergencies.

People, he said, were unaware that they took water supply for granted.

“They are used to turning on the tap to get water. When there is no water, they panic, ” he said.

Mohd Fauzi advised consumers to always store water that could last at least a day under normal usage.

On average, he said, Singaporeans used only 141 litres of water per day while Malaysians used 230 litres.

“We need to manage our usage in order to conserve more water, especially during disruptions.

“It is important that we do so because water is a shared resource that we will pass down to future generations.”