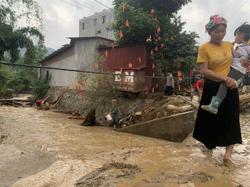 Ng (second from right) handing over the letter of demand to Aminuddin’s political secretary Mokhtar Ahmad at Wisma Negri.

Ng, a lawyer who will be representing the group on a pro bono basis, said the suit would be filed next month.

“I will meet the 199 residents and business operators to discuss this. Once we have established how many are prepared to continue with the suit, we will file it, ” said Ng, who is also MCA Civil Society Movement bureau head.

Apart from the state government, the group will take legal action against the Seremban mayor, state Drainage and Irrigation Department director and Syarikat Air Negri Sembilan.

On Jan 29, the victims sent a letter of demand to the parties seeking compensation for the Nov 4 flash floods.

They claimed that the parties were responsible for their losses as the flash floods were caused partly by negligence.

They alleged that the authorities had among others, failed to exercise a reasonable duty of care to manage or open the floodgates around the Sungai Linggi water treatment plant when there was heavy rain upstream, failed to upgrade the floodgate system to release excess water and to provide a better drainage system in the affected areas.

They said they would be seeking RM8.8mil in special damages as well as RM1mil for pain and suffering, exemplary and aggravated damages.

Ng expressed regret that the state government had failed to respond to the letter of demand from the victims.

“The state government failed to respond within 14 days or tell us the findings of their investigations on what caused the flash floods.

“They also failed to explain their plans for the future to prevent a recurrence, ” he added.

On Wednesday, Mentri Besar Datuk Seri Aminuddin Harun said the state government could not be held responsible for the flash floods.

“The flash floods were unexpected and beyond our control.

“It was an act of nature and it happened in other states too.

“In this case, the non-governmental organisation or society that is supporting the residents should also go to other states and support the flood victims there, ” he said after chairing the state exco meeting at Wisma Negri in Seremban.

Aminuddin said his administration had been proactive and helped the victims by giving RM500 each to some 1,000 households and business operators affected by the flash floods.