Pon (kneeling, right) with a group of tourists in front of the Sultan Abdul Samad Building in Kuala Lumpur before the pandemic hit.

THESE are turbulent times for tour guides as the movement control order and closure of borders due to the Covid-19 pandemic have badly impacted the tourism and travel industry in Malaysia and by extension, their livelihood.

Although the Federal Government provided RM600 relief to tour guides under the 2020 Economic Stimulus Package as well as one-off financial assistance of RM500 this year to 14,000 tour guides, it was by no means enough to sustain them as there was hardly any tourism activity for the past year.

This has forced many tour guides to venture into other industries to find alternative sources of income while waiting for tourism activities to resume.

Freelance tour guide Catherine Chana James Gak had to overcome a number of obstacles to survive when the pandemic hit.

“In February last year, tourists started to cancel their bookings and by March, there were no more tour commitments.

“We never expected something like this to happen and it hit us hard.

“We were struggling and could not get a stable income, ” she said. Alex (left) introducing the Klang Heritage Trail to visitors prior to the first MCO last year.

The former construction management engineer became a tour guide because she wanted to educate others and share the culture of Malaysia’s indigenous people.

Catherine, an Iban from Kuching, Sarawak, had not expected the MCO to have such an adverse effect on her and the industry.

“We thought it would only be for two weeks but it dragged on for months, ” she lamented.

“I scrambled to find part-time jobs and worked as a babysitter, maid, cleaner and even had a stint in the security industry just to put food on the plate.

“Sometimes, I would cook Sarawak laksa at home and share it with my friends and neighbours.”

A business opportunity presented itself when one of her friends asked to team up with her and open a stall selling Sarawak laksa.

“We jumped on the idea and started looking for a venue to set up shop.

“But when my friend could not come up with her share of the capital and deposit, she gave up, leaving me alone in this venture.

“I was so determined to start the business and at last, I found a spot in Desa Petaling, Kuala Lumpur, ” she said.

Catherine’s perseverance paid off and she went on to open another stall in Taman Sungai Besi, Kuala Lumpur.

The second stall, however, is set to move to another location. 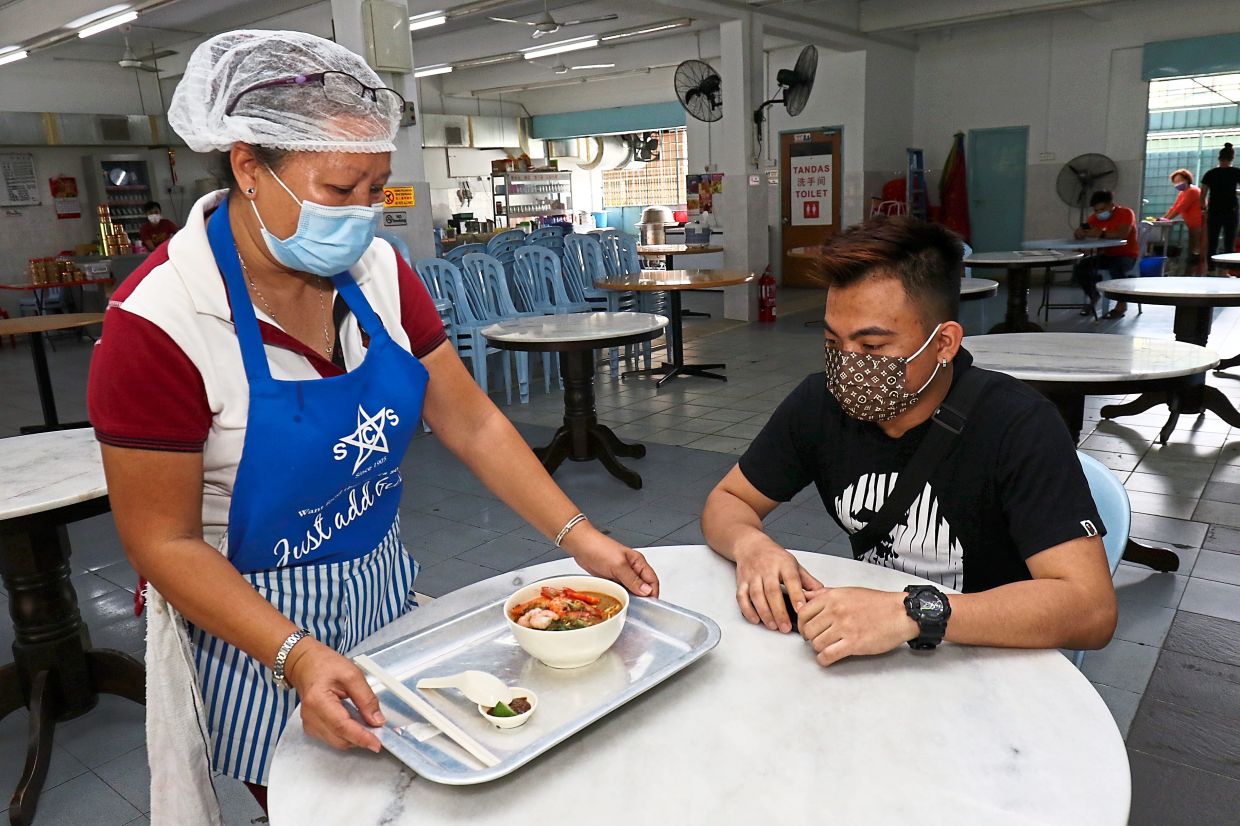 Called Auntie Meow Meow Sarawak Laksa, the stall sells the traditional dish made with 20 types of herbs and spices, including galangal, lemongrass and ginger.

“The name of the stall comes from the fact that I have three cats and love them to bits. Also, I come from Kuching and my name has the word ‘cat’ in it too.

“Without any tour guide work, life has been tough but I cannot complain because I know there are others who may be worse off, ” she said.

Asked if she would return to being a tour guide when the tourism sector revives, she said she would if the right remuneration was offered.

“It gives me a sense of joy and satisfaction, ” she added.

Another tour guide, Pon Hon Kong, considers himself lucky as he had a secondary income to fall back on when the MCO started last year.

“I obtained my tour guiding licence in 1995 and specialised in inbound Hong Kong tourists, ” he said.

“After more than 20 years in the industry, one of my contacts introduced me to a multi-level marketing (MLM) company involved in direct selling health and beauty products.

“I was sceptical at first, but after understanding the business, it became my second source of income.

“The part-time job then slowly transitioned into a full-time job, ” he said.

Pon had wanted to find another source of income to support his family so that they could live a more comfortable life.

“It also allows my wife, who is a tour guide as well, to focus on taking care of my daughter or venturing into other businesses that she likes, ” he said, adding that the MLM business had slowly become a passive income for his family.

Pon said he would never give up tour guide work despite the demands of the job.

“Tour guiding is an assignment-based job that peaks during the festive seasons and before we got involved in the MLM business, we barely had a chance to celebrate Chinese New Year.

“Often, we would not have enough tour guides during the festive season and there would be quite a lot of tour guide assignments.

“What I like most about being a tour guide is that I get to introduce Malaysia to foreign tourists and offer them our warm hospitality during their stay here, ” he said, adding that seeing his guests have fun and enjoy the food while fostering friendships was the reason he loved the job. 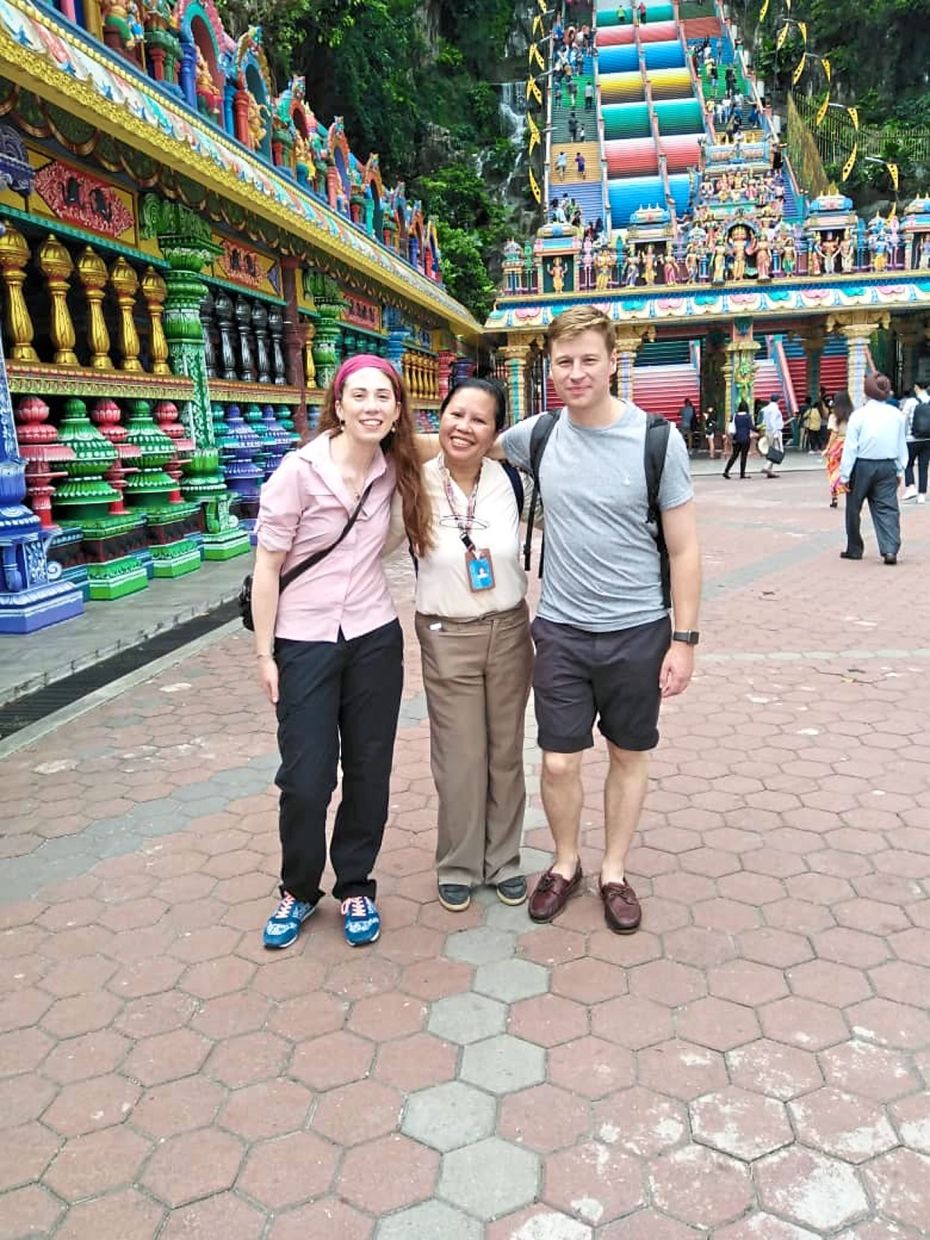 Catherine flanked by foreign tourists she brought to Batu Caves, Selangor in November 2019.

For tour guide Alex Raj, the MCO had given him time to improve on his marketing skills and create new tourism-related education material.

“When the MCO hit us last year, there were practically no assignments for tour guides.

“So, I decided to join a digital marketing course under the Human Resources Development Fund’s Penjana programme and learnt to utilise online platforms for marketing.

“At the same time, I developed tour guide courses that are awaiting approval from the Tourism, Arts and Culture Ministry (Motac).

“I have been developing modules for tour guides for some time now and there are five more modules that are yet to be approved, ” he said.

“Although I do not really have an income now, I have enough to get by.”

Alex became a tour guide in 2013 after retiring from a marketing job in an oil and gas company.

He committed his time to hosting local and foreign tourists and discovered the ability to present the country in a positive and interesting way to foreigners.

“Sometimes, I would take on local trails such as the Klang Heritage Trail for visitors from cruise ships.

“Coming from a marketing background, I have a flair for selling products, and seeing tourists appreciate the things they have learnt was very rewarding for me.

“So, if the borders reopen, I will return to being a tour guide, ” he added. 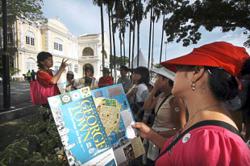 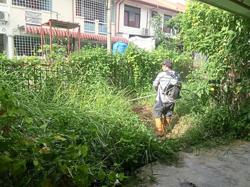