AS WE usher in the Year of the Ox, many Chinese households would have pasted red coloured strips with black or golden calligraphy Chinese characters written on them (known as Spring Festival couplets), or diamond-shaped Fu characters (denoting happiness and wealth) on their doorways.

The custom of attaching couplets to doorways for Chinese New Year can be traced as far back as the Later Shu State (934-965) in China, with the red colour denoting luck and gold characters showing wealth. 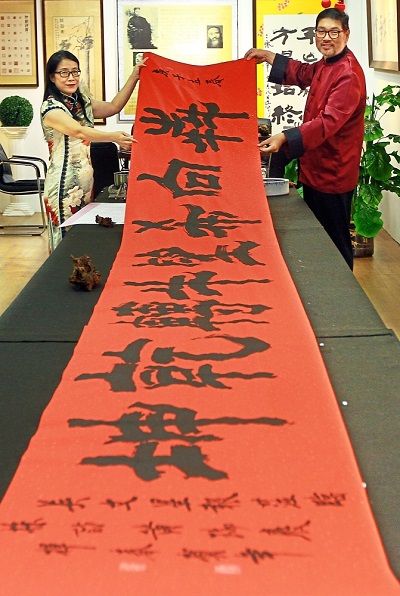 Calligraphy Society of Malaysia president Ng Swee Kheng (right) and wife Lin Qing Hong showing Ng’s Chinese calligraphy that reads ‘May the Year of the Ox bring about a better year ahead to give hope, well wishes and plenty of good luck and fortune.’ The Chinese script used here is from the clerical style dating back to the Han dynasty 2,000 years ago.

In Malaysia, the run-up to Lunar New Year is usually a very busy time for calligraphers, whose artistic talents are much in demand at shopping centres for demonstrations and decorations.

However, Covid-19 and the movement control order have forced them to make changes.

Calligraphy Society Mentakab chairman Kevin Wong said public demonstrations are definitely on for sure, but online.

“Writing propitious messages is seen as an act that will bring the calligrapher much luck and good fortune.

“They may not be able to do this live at the open markets due to the pandemic, but we are taking their work online via the Calligraphy Society Mentakab Facebook page.

“This way the public will be able to view their work and order them like postcards to be mailed to family and friends.

“I reckon it is a revival of the sending of Chinese New Year cards, ” said Wong, who is also Calligraphy Society of Malaysia design and publishing director. Wong has taken to teaching Chinese calligraphy class via online videos which he shoots using a smartphone. — Courtesy photo

The Chinese calligraphy movement, like most other art forms, was badly hit when the MCO was first announced in March last year.

Calligraphy Society of Malaysia president Ng Swee Kheng recalled that all activities related to the art form came to a standstill.

“Before the MCO, there would be no less than 10 exhibitions in a year.

“Nearer to the Chinese New Year season, there would be public demonstrations where calligraphers would station themselves at either shopping complexes or open-air markets to write propitious verses in black or gold ink on red paper.

“Our society and its umbrella branches, would see up to 100 public demonstrations of this nature with participation from as many as 1,500 members, ” said Ng, 52.

But all these had to be cancelled due to the MCO.

“For the first three months, everyone just stayed at home, ” said Ng.

But by last May, the committee decided that it could no longer carry on this way. A selection of brushes used in Chinese calligraphy made of a variety of materials like chicken feathers, nylon, and hair of horse and mountain goat.

“Chinese calligraphy may be a quiescent and unassuming art form in nature but the passion that drives those who practise it burns very bright indeed.

“Those who take up calligraphy are always reminded by their masters to never forget why they took it up in the first place to preserve the art form.

“It is every calligrapher’s duty to pass on the knowledge to the next generation, ” said Ng, who also teaches Chinese calligraphy at the New Era University College.

With that in mind, the committee began to plan.

Society secretary Tham Lek Seng, who happened to be from the IT industry, provided advice on what applications the organisation needed to use for promotional news feeds, online conferencing involving large number of participants and group chats to connect members from other calligraphy associations nationwide.

After one month, the society came up with its first event, ‘Phd Talk on Calligraphy’. Screenshot of (from left) Cheong Chong Yuet, six, Loo Kai Wen, 11 and Loo Kai Qi, 9, from the Calligraphy Society Mentakab, showing off their skills in a video to commemorate the Year of the Ox.

Featuring five professors who spoke on different subjects ranging from the evolution of Chinese script to the eras when they were used, the first session debuted last July and the free webinars ran every Saturday for four months, from 2pm to 4pm.

By going online, the society was able to invite calligraphy associations from Indonesia, Singapore and Australia to take part.

The next event was an online calligraphy competition organised by Persatuan Alumni University Feng Chia Malaysia and attracted 2,500 participants.

Besides a cash prize and a trophy, it offered the top 15 calligraphers a paid trip to the university in Taichung, Taiwan.

The society also plans to join hands with the Selangor Hainan Association for a similar event. Ng said this would be the first time the association was holding the event online after 34 years. 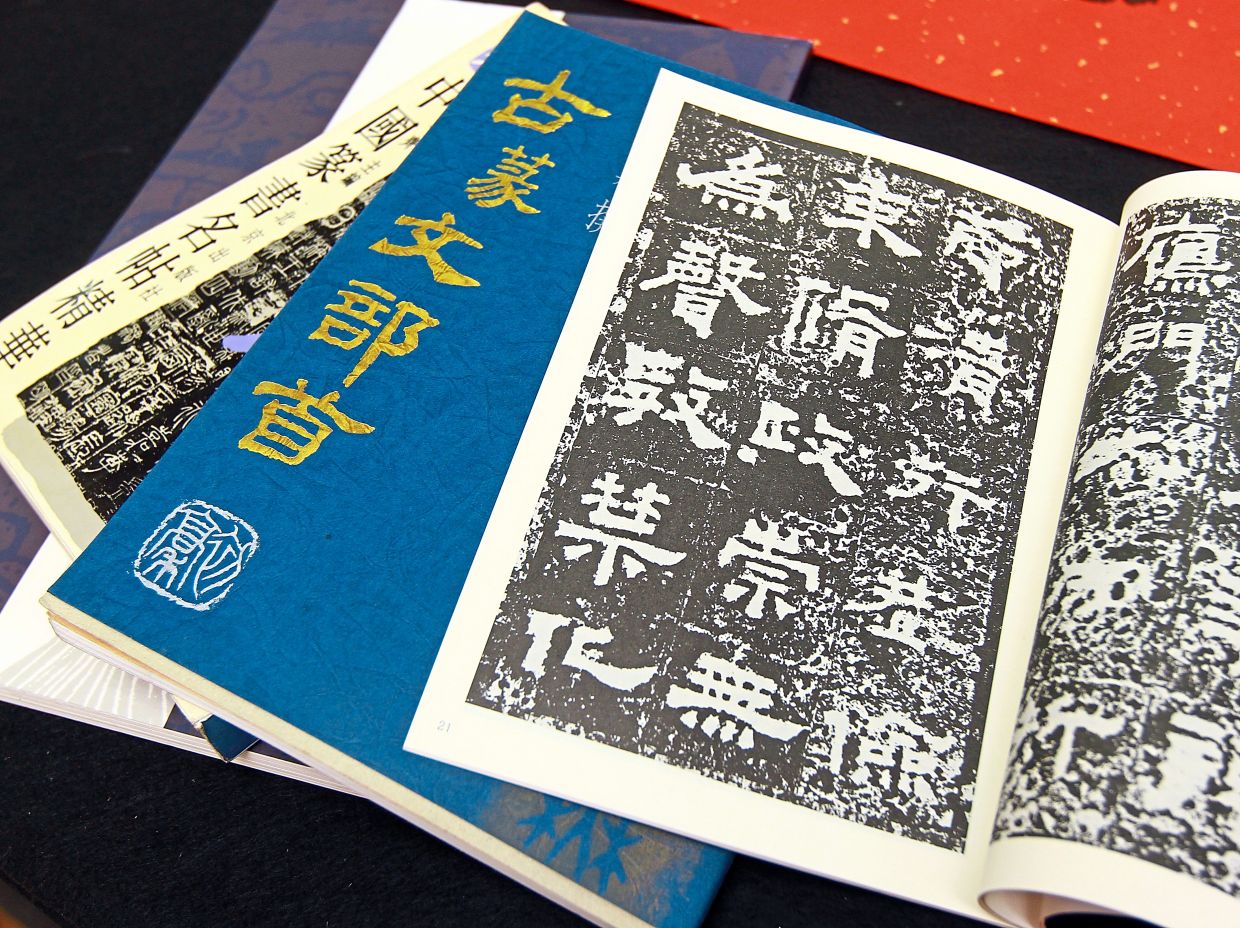 Chinese characters dating from as far back as 2,000 years ago are preserved in books like these where the present generation are able to use as reference. — Photos: CHAN TAK KONG/The Star

In the past, it had taken place at the Thean Hou Temple in Kuala Lumpur.

Freedom from the encumbrances of time and expenses needed for travel were the reasons attributed to the encouraging turnout.

When an event is just a click away, attendance is made all the more convenient, not to mention far more comfortable, hinted Ng.

Wong said since many of the participating members are in their golden years, the society made the process to go online an easy one, even for the tech dinosaurs. Calligraphy Society Mentakab member Lim Soo Pak, 75, may not be able to take part in the annual public demonstrations to write auspicious verses but the society has helped him put his work on their social media page, where the public can order and have his work posted to friends and family for Chinese New Year.

“We provide them with links to join online webinars. All they have to do is click on the links sent to their Whatsapp accounts.

“It was not easy to engage those from the older group but with help from their younger family members, they can manage.

“They may be slow, but as long as they can continue with the art and inspire the next generation, that is what we want, ” said Wong when asked how he reached out to the 50 members in Mentakab, Pahang.

The 49-year-old, who has taken to conducting online events, added that when he first started, the business of teaching a Chinese calligraphy class in front of a smartphone camera was daunting. Instead of public demonstrations where calligraphers write auspicious messages to be given away, this year they are writing on postcards which are sold online, says Wong.

But over time he has learned to polish his presentation skills.

“Now I have two mobile phones. One to focus on my expression, another is in my hand as I am writing the Chinese characters.

“The point is, I may not be the best, but that is better than not doing anything.

“At the end of the day, practice makes perfect, ” said Wong. 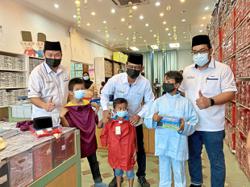 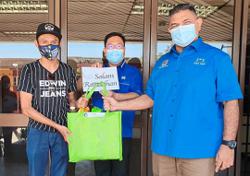