Sunway Group CSR, internal branding and events general manager Bernard Paul handing over Aeon vouchers to one of the beneficiaries in Bandar Sunway.

Sunway Group, through its #SunwayforGood corporate social responsibility (CSR) initiatives, reached out to more than 200,000 people nationwide in 2020.

Many B40 families lost their sources of income and were struggling to put food on the table since early 2020.

Sunway, through the #SunwayforGood Fund, gave Aeon vouchers worth RM50 each to more than 2,000 beneficiaries living in Bandar Sunway whose incomes ranged from RM980 to RM2,208.

Aeon vouchers worth RM100 each were also given to 736 students from B40 families. These pupils are from SK Bandar Sunway, one of Sunway’s adopted schools.

Each beneficiary can use the voucher to buy groceries or school uniform and shoes.

The #SunwayforGood Fund was set up in collaboration with the Jeffrey Cheah Foundation to collect donations from all Sunway employees and help the poor and those hit hardest by Covid-19.

In the spirit of caring for the grassroots, Sunway also used its own Sunway Resort Hotel truck to transport 250kg of groceries from Food Aid Foundation to Persatuan Insaf Murni in Kajang, aiding 20 families living with HIV.

To complement #SunwayforGood efforts last year, Sunway produced a video highlighting the group’s progress and achievements in helping B40 communities and how the public can provide assistance.

“It has certainly changed our mindsets, from the art of living to the heart of living and giving, ” said Sunway Group deputy executive chairman Tan Sri Razman M. Hashim, who led the #SunwayforGood initiatives.

“We have the power to make a difference and be the light in someone’s life.

“Through our initiatives, we have impacted more than 200,000 lives and contributed over RM34mil to aid those in need.

“Further, we have surpassed our target of collecting 40,000kg of food through the #SunwayforGood Food Bank programme, reaching more than 53,000kg as of end December 2020.“We aspire to bring hope to underserved communities, ” he added.

Razman shared that Sunway’s ultimate goal was to look at the long-term impact of uplifting B40 communities and help them break free from poverty.

“It requires the commitment and shared efforts of all strata of society, namely the private sector, academia, civil society and every single individual.

“We are all in this together, ” said Cheah. 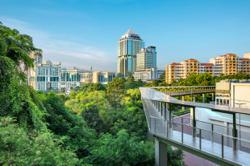