It is common to some sellers walking in between lanes for more visibility for motorist who stopped at the traffic light, as seen here at Jalan Subang in Shah Alam.

MOST street vendors operate from stalls set up by the roadside.

However, a growing number of them have literally taken their business to the streets.

With a placard hanging from their necks to promote their offerings, they tote packets of foodstuff to sell to motorists along the roads, lingering especially at traffic light junctions.

Some of these traders — mostly selling pickled mangoes, various snacks and packet drinks — wait by the roadside and on road dividers for potential buyers.

When vehicles stop at the red light, they try to make a sale and when the lights turn green, they retreat and wait for the next group of customers.

Others make a sale while walking between rows of stationary vehicles at traffic lights.

One can say these junctions have turned into “drive-throughs”.

These sellers are oblivious to the risk they put on themselves as well as motorists.

One of the sellers, Mohd Shahron Manap, 34, used to run a fruit stall at Tanglin Food Court in Kuala Lumpur.

He said his business was hit hard during the movement control order.

After nearly two months of no income, the father of four was forced to think of ways to earn a living and decided to sell pickled mango on the streets.

He said people were no longer dining at food courts, so he had to go to the customers instead.

“In May, I decided to sell pickled mangoes on the streets.

“I recruited five men to help me sell them in Taman Permaisuri, Cheras for a commission.

“I found that we could sell a lot more tubs on the road than from my stall, and earn a decent income daily.“On the issue of road safety, I have always advised my staff to stand on the divider at all times and only go onto the road when called by a motorist, ” he said.

When asked about cleanliness and Covid-19 prevention methods, he said the pickles were prepared by him daily with good hygiene practices.

“The contact between my staff and the customers is very brief, similar to what is practised at other drive-throughs and cashier counters.

“Of course the customers’ contact details are not recorded but if we were to scrutinise every aspect, we will not be able to make a living, ” he said.

Another trader from Sentul, who is known only as Atan, said he had been selling pickled mangoes since late last year.

The 23-year-old said he used to work in the retail industry and in an office-like environment, but it did not suit him well.

“I have always wanted to have my own business and tried selling my own recipe of pickled mango.

“When I started, six people were working for me but due to the MCO, it has now reduced to three.

“However, I can still make between RM1,500 and RM2,000 monthly in profit. My staff also get to earn some money, ” he said, believing that he would not make as much sales if he was to be stationed at a stall.

Atan acknowledged the dangers of selling his items while walking on the streets.

No complaint, no action

Despite the increasing presence of such traders on the roads lately, local authorities in the Klang Valley have not received any complaints.

Kajang Municipal Council public relations head Kamarul Izlan Sulaiman said they were aware of the street traders’ on-the-road operations, but had yet to receive complaints from the public.

He said there was a complaint about a child trader in October but not about the operation itself.

“We forwarded the complaint to Welfare Department and upon investigation, it was found that the person was above 18 years old but had a short stature, ” he said.Kamarul said the council was concerned about hygiene, which was not being regulated.

He said they had to find a way to overcome the problem without drawing flak from the public.

“There is no surety that the food handlers have had typhoid vaccination and we don’t know how the food is prepared or if it is stored in a sanitary environment. Consumers need to weigh the risks before making their purchase.

“If there is no demand, the traders will not continue trading in that manner, ” he said, adding that action would be taken only upon receiving a complaint.

A Kuala Lumpur City Hall (DBKL) spokesperson said they too were aware of the new marketing mode, but did not receive any complaints.

He advised the petty traders to apply for a six-month temporary licence and trade at a safe place that did not obstruct traffic.

“Each stall is allowed a foldable table and a makeshift 8ft by 8ft tent. No fee will be charged for the licence.

“Traders need to find a suitable place and clean up at the end of their business day.

“I hope the petty traders will take the opportunity to trade legally and not subject themselves to enforcement action, ” he said.

However, Shah Alam City Council (MBSA) Corporate Communications head Shahrin Ahmad said they had received complaints from the public about such traders and had issued compounds to some of them.

“I advise such traders to apply for a temporary trading licence at designated areas, to avoid enforcement action and compound, ” he said.

Regardless of the economic situation, social activist Tan Sri Lee Lam Thye said some form of regulation was needed to ensure safety and control of the activities.

While he understood that the traders were trying to make ends meet during the current economy caused by the Covid-19 pandemic, he said many risk factors had to be taken into consideration.

“On the road safety aspect, things could become much worse if something untoward happened.

“We understand that the traders are only trying to make ends meet. But what if the trader, who is the sole breadwinner of his family, is killed on the road? His family would suffer much more, ” he said.

Traders were constantly exposing themselves to different people and vice-versa, he said.

“No data is taken for contact tracing purposes and if there was a need for it, it would further complicate the matter, ” he said, suggesting that the local authorities get them off the streets and give a viable alternative trading space.

Lee also called on MPs and assemblymen to identify areas in their constituency with wide road shoulders to relocate the street traders.

“If the traders are grouped together in one area, it would be easier to issue them temporary licence and collect the contact tracing data.

“We cannot force them to get off the streets without a solution.

“Desperation for survival will force them to return or move to a different location.

“We must help to provide a safe space for them to continue their business, ” he added. 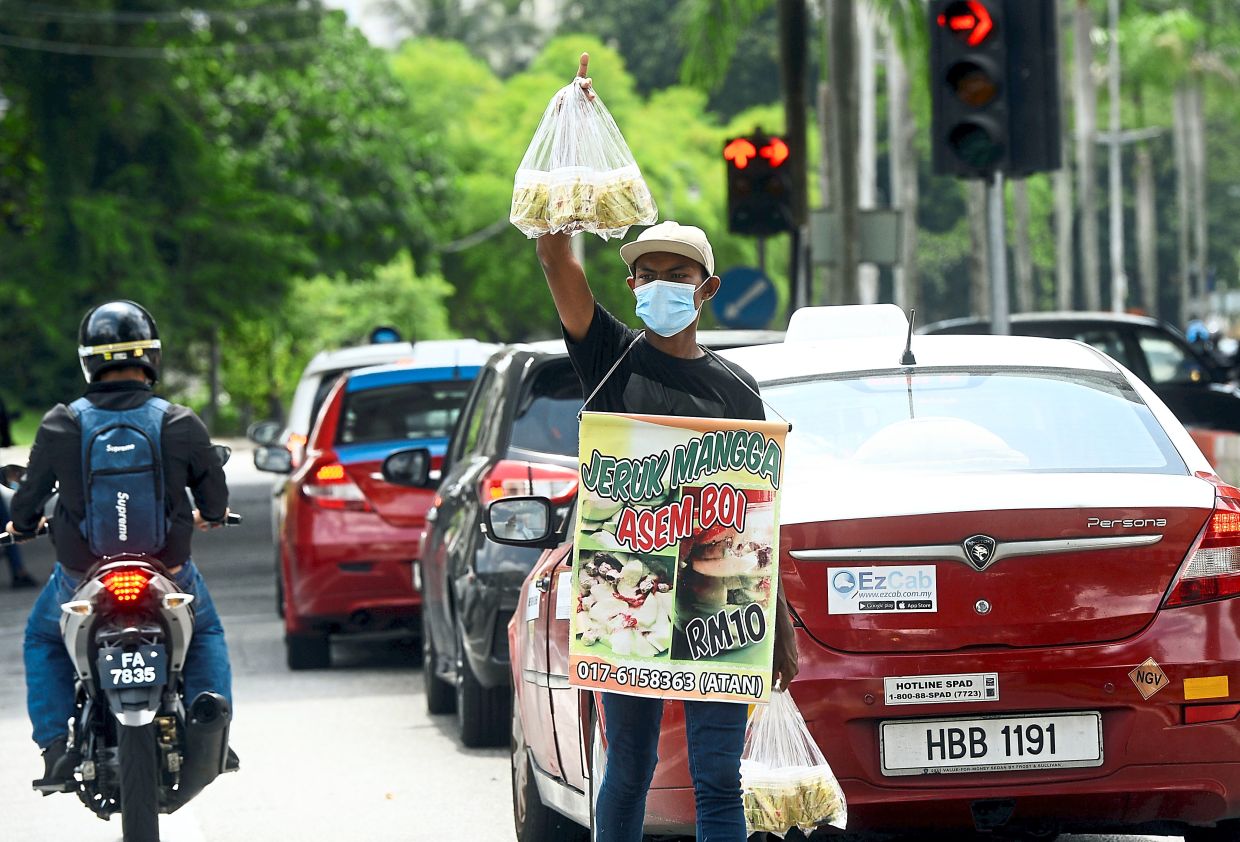 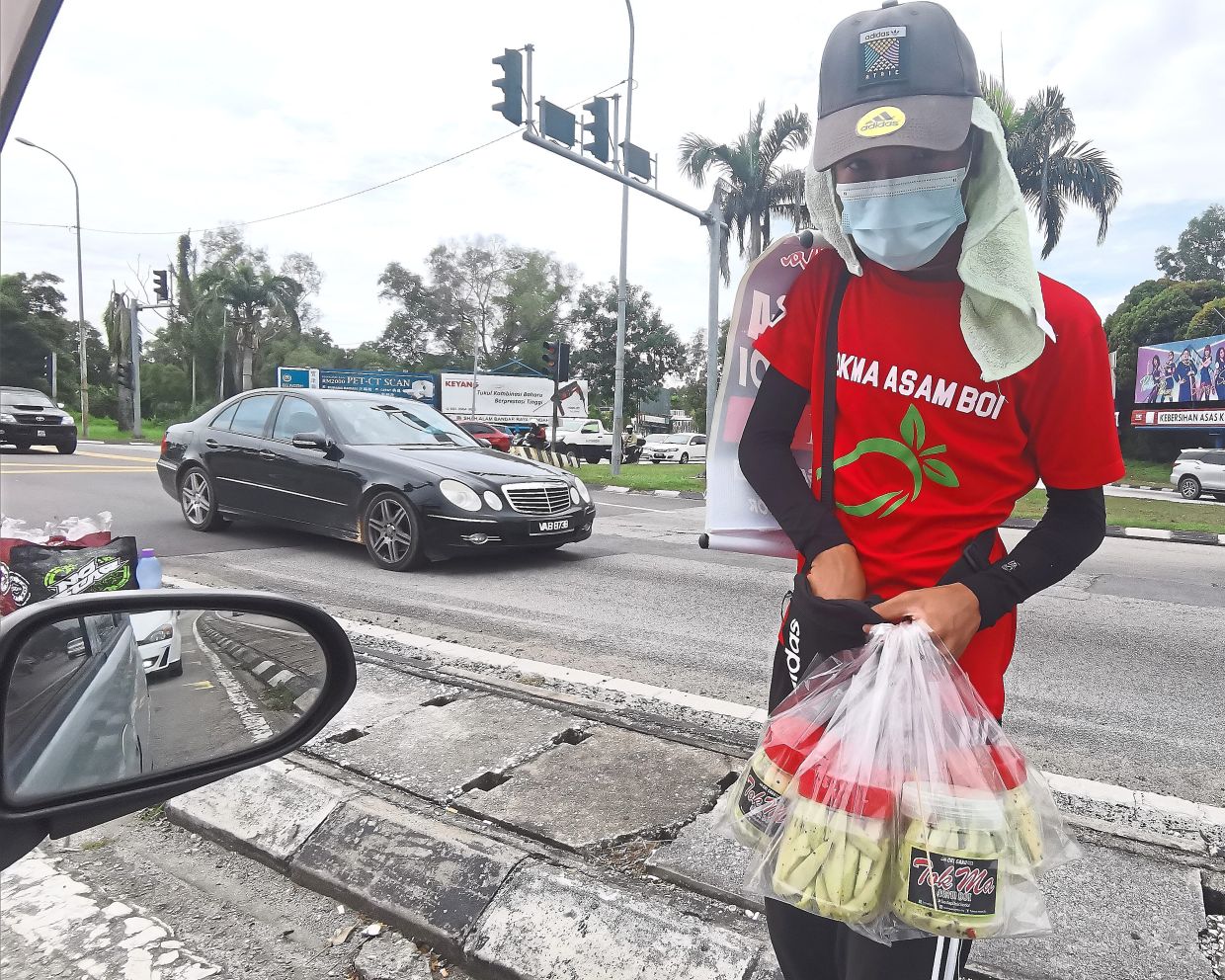 It is common to some sellers walking in between lanes for more visibility for motorist who stopped at the traffic light, as seen here at Jalan Subang in Shah Alam.

This drink seller at Jalan Bukit Cerakah in Puncak Alam has taken precaution by wearing a face mask. 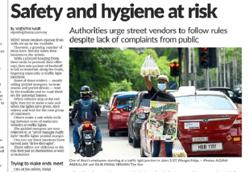 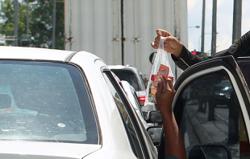