Zamakhshari (middle) and fellow officers showing the highest price bids received for the corresponding special car registration numbers at a press conference at the state JPJ headquarters in Seberang Jaya on mainland Penang.

THE Road Transport Department (JPJ) will be expanding its online services with additional payment kiosks in 50 strategic locations across the country.

“Currently, we have 51 kiosks set up at various JPJ branches and headquarters throughout the country.

“With the additional allocation to JPJ as announced recently, we will set up another 50 kiosks soon, ” he said during a press conference at the Penang JPJ headquarters in Seberang Jaya recently.

Zamakhshari said the heavy-duty kiosks would be placed at strategic locations such as shopping malls, petrol pump stations and other public places.

He said throughout December this year until February next year, JPJ would conduct a survey to identify suitable locations for the kiosks to be placed and used by the public.

“We will open tender after that and the kiosks are expected to be fully operational by June next year.

“The kiosks will reduce the need for people to settle their JPJ matters at physical counters as well as providing customers with 24-hour service, ” he said.

Zamakhshari said JPJ netted over RM7mil for the “PPP” number plates via the JPJeBid system in the course of five days recently.

He said the “PPP” series, which was open for bidding from Nov 5 until 11.59pm last Monday, saw its highest collection at RM7.3mil.

“This is an increase of RM3.9mil compared to the biddings for the “SYG” number plate series in Sabah last June, ” he said.

Zamakhshari said the successful bidder of the registration numbers must register the plates on their vehicles in 12 months’ time from the date of the offer letter they receive from the state or branch office of JPJ.

He said the remaining registration numbers that were not bid would be open for sale to the public at a minimum price.

A total of 11,718 bids were made during the course of five days with the remaining 5,082 attractive numbers still up for sale. 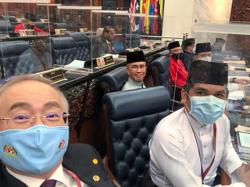