THE Petaling Jaya Dispersal Link (PJD Link), which will connect Damansara in Petaling Jaya to Kinrara in Puchong, is still in the early stages of discussion and there is no decision on it yet, Selangor infrastructure and public amenities, agricultural modernisation and agro-based industry committee chairman Izham Hashim said.

“We have only recently discussed it briefly at the state Economic Action Council (MTES) meeting and no commitments have been made, ” he said.

He was responding to a question from R. Rajiv (PH-Bukit Gasing) at the Selangor State Assembly yesterday.

Izham added that the final decision would be made by the Federal Government.

Rajiv wanted to know how much allocation was the Selangor government considering for this project and was told that the state would not be funding it at all as it involved a private company.

“I also want to know why the state government does not outright reject this proposal as the state has already rejected the Kinrara-Damansara Expressway (Kidex) in 2015.

“If you look at the map, both highways are almost similar in route, ” he noted.

Izham said there was a need to help disperse traffic from Damansara to Kinrara, but the state would take into account all aspects of the PJD Link especially at the parts that ran through rivers and residential neighbourhoods.

“The two highway routes are not completely similar but we will continue to study the need for a north-south dispersal link.

“The decision will ultimately be made by the Federal Government.

“At the state level we only study the necessity and implications, and make changes to the route if necessary, ” he said.

He added that among the things the developer must fulfil was conducting comprehensive traffic, social and environmental impact assessments.

On a separate matter, the state assembly was told 269ha of forest reserves in Selangor had been razed by fire in three years from 2018. These forests are in Kuala Langat, Kuala Selangor and Hulu Selangor.

“There is a significant difference in areas and sizes of land burnt over the three years, with the fires caused by various factors.

“One of it is the prolonged hot and dry weather such as El Nino, which increases the risks of fire, besides the inefficient management of hydrology, ” said Selangor environment, green technology, science, technology and innovation and consumer affairs committee chairman Hee Loy Sian.

He said there was also the

problem of open burning carried out by locals for agricultural purposes, resulting in the fire spreading to the forests.

He was answering a question from Elizabeth Wong (PH-Bukit Lanjan) who wanted to know how much of forest reserves had burnt since 2018.

She also wanted to know what could be done to reduce the number of fire incidents. To this, Hee said efforts were being taken by various agencies --- the Environment, Forestry and the Minerals and Geoscience departments --- to tackle this matter.> More state assembly 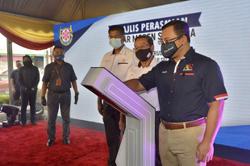