The Chief Minister said he had discussed with Dayak leaders in the state government how to prepare the community to participate in the significant changes in the state’s economic landscape.

“Our economic agenda up to 2030 will be based on the core of digital economy and environmental sustainability.

“We will have a new approach to develop our forestry sector and we are going towards green technology,” he said when launching the construction project for the Dayak Cultural Foundation (DCF) and Dayak Chamber of Commerce and Industry (DCCI) headquarters in Jalan Ong Tiang Swee here.

Abang Johari said the state’s future was bright as its economic base, including the agriculture and forestry sectors, would be diversified.

“Through digital commerce, we can reach out to the market beyond Sarawak waters.

“We are also developing our talents by setting up international schools,” he said.

At the same time, the Chief Minister said the Dayak community should continue to preserve their cultural heritage.

He said this was reflected in the architecture of the headquarters project, which would feature two towers for DCF and DCCI respectively.

“One tower is for modern Dayaks based on business and commerce, the other for you to sustain and protect your Dayak culture.

“In other words, this is an important message through these two towers,” Abang Johari said.

Deputy Chief Minister Datuk Amar Douglas Uggah said the two nine-storey buildings, to be called Panggau Dayak Towers, would be built on a 2.32ha site at a cost of RM36mil.

He said the state government had granted an allocation of RM20mil, with another RM16mil to be raised.

“With the completion of the building, DCF will have new facilities for its dancers and cultural performers as well as generous gallery space for exhibitions.

“DCCI, in its role as a chamber of business for the Dayak community, will provide shared office space for Dayak businesses and allow them to make use of incubator facilities,” he said.

Both office towers are expected to be completed by mid-2022.

The project also includes a residential component of 110 apartment units in two blocks with facilities such as a clubhouse, swimming pool and children’s play area.

The residential blocks are expected to be completed in mid-2023. 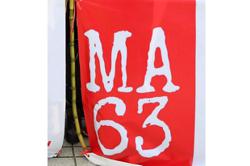