A look back at carefree times

GAZE upon the figures painted in Penang artist Alex Leong’s “After School” series and you just might see a younger version of yourself, be it the boy chatting with friends on a railing or the girl heading home on a trishaw.

Leong drew on his own memories of joyful schooldays and brought them to life with watercolour on paper.

“The time after school is a happy hour when you can chit-chat with friends, have fun or just snack by the road.

“When I attended afternoon school, my bus often came as late as 7.30pm. My friends and I would play traditional games or make something up on our own while waiting.

“Those happy memories have stayed with me all my life, ” Leong, who turns 51 this month, shared.

He was inspired to start the series of paintings after his 10-year-old daughter asked him why he picked her up from school so early as she preferred to stay back a little longer to talk with friends.

“I’m from Chung Hwa Confucian and my former schoolmates keep asking me why I haven’t painted my own school yet. It’s coming. There are so many memories, ” the artist quipped.

The paintings are now on display at Leong’s solo exhibition titled “Celebrations and Nostalgic Moments” at The Art Gallery in Bellisa Row, Pulau Tikus, Penang.

Pieces depicting the Mid-Autumn Festival, Christmas and a chingay parade at Komtar illustrate Leong’s artistic skills as they are night scenes which can be rather challenging to do with watercolour as light and dark tones need to be balanced.

Also notable is “Chinese New Year Highlights” that captures key moments of the 15-day celebration in one well-composed panorama.

From left to right, it starts with the reunion dinner on the eve, followed by visiting relatives on the first and second days, welcoming the God of Fortune on the fourth day and celebrating “ren ri” or humanity’s birthday on the seventh day.

Day transitions to night as the Jade Emperor’s birthday is celebrated on the ninth day. The 15th day then marks the first full moon of the new year, a time for lanterns.

“I like to capture the olden days in Penang, not just the buildings but also the activities of locals. I hope viewers can see the stories these paintings tell.

“I also hope I can give my daughter and her generation some insight into the good old days, ” added Leong, who was a graphic designer before becoming a full-time artist in 2012.

Gallery director Tan Ee Lene said both series featured themes that were especially meaningful in light of the Covid-19 situation.

She noted: “All of us were unable to celebrate important occasions while children were unable to attend school. All the moments that we missed are beautifully captured in Leong’s artworks.”

The exhibition runs until Aug 28 and is open for viewing from 2pm to 5pm every Friday to Sunday. For other times, viewing is by appointment only. Call Tan at 012-6041 434.

Due to physical distancing rules, there will be limits on the number of guests allowed in at any one time. Admission is free. 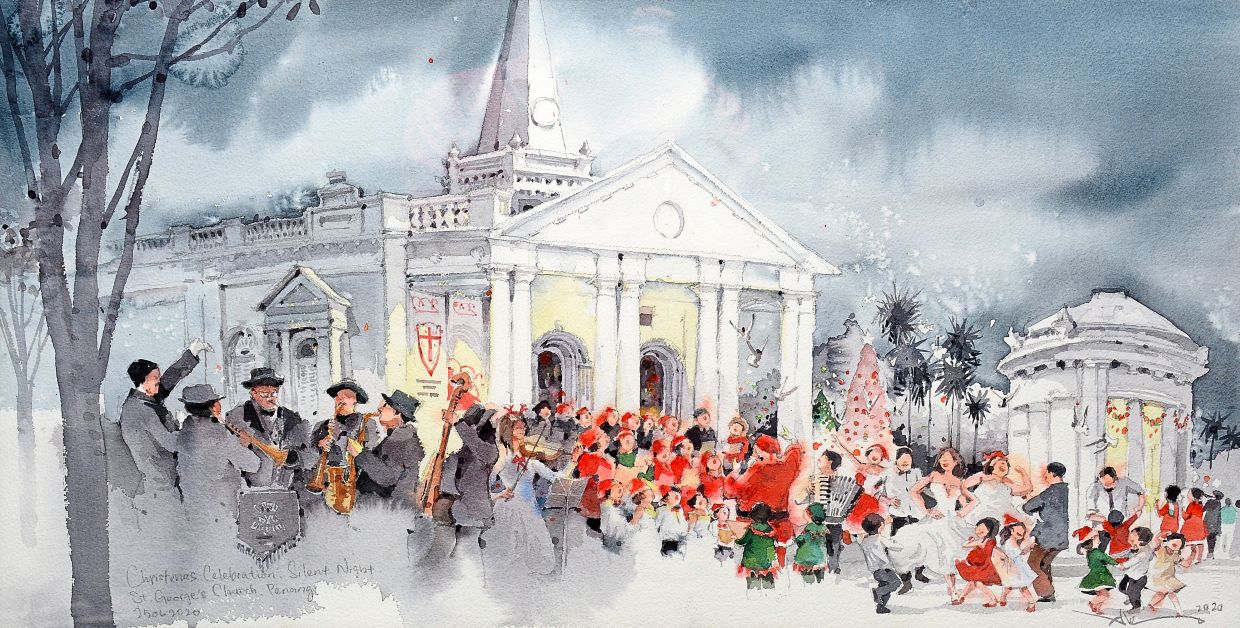 Leong’s ‘Chinese New Year Highlights, Toh Aka Lane’ depicts a series of events throughout the 15-day celebration. They are (from left) the family reunion on the eve, visiting relatives on days 1 and 2, welcoming the God of Fortune on day 4, celebrating humanity’s birthday on day 7, praying to the Jade Emperor on day 9 and the Lantern Festival on day 15.

‘Chung Ling High School’ from Leong’s ‘After School’ series shows happy boys larking about after classes are over.