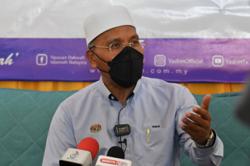 A factory full of counterfeit goods that was raided by the Domestic Trade and Consumer Affairs Ministry.

ONLINE shopping scams were rampant during the movement control order between March and June, according to statistics by the Domestic Trade and Consumer Affairs Ministry.

Its Enforcement Command Centre showed that e-commerce scams topped the list of complaints received in the federal territories of Kuala Lumpur and Putrajaya followed by Selangor.

“Based on our records up to June 30, online scams topped the list with a whopping 6,187 complaints.

“In June alone, 2,287 complaints were received, a big jump from the 5,415 cases reported for the whole of last year, ” he said, adding that this included complaints on piracy issues.

Apart from online transactions, other fraud cases reported were for profiteering, not displaying prices, false representation and misleading consumers relating to the product, selling counterfeit goods and pyramid scheme-type business.

“Unlike 20 years ago, when scratch-and-win scams and pyramid schemes were rampant, now everything is happening on the worldwide web, ” Shamsul added.

“And you can see that the surge was during the MCO when people relied on online shopping and were more vulnerable as they were cooped up at home, ” he said.

“More than 4,000 complaints were lodged by consumers for not receiving the goods and services they paid for such as paying a hefty sum for a pre-loved luxury-brand bag but receiving a fake product.

Shamsul blames overexcited and gullible customers who have easy access to banking and communication services for falling prey to such scammers.

“Today you can buy anything online because everyone has access and their data is available so easily, and people get carried away with discounts and promotions that they don’t stop to think if it is genuine.

“There was high Internet traffic and the number of complaints we received says it all, ” he said.

Shamsul urged consumers to get as much information as they could on the product and the company, saying it would not hurt to read comments or reviews before buying an item.

“Even if you are buying something from a Facebook platform, check the price of the product, the company name, address and email.

“This information must be available to everyone, and if it is not indicated and requires you to ask the company to “pm” the price, that is fishy.

“We have laws to protect you, like the Consumer Protection Act 1999, the Trade Descriptions Act 2011 and the Price Control and Anti-Profiteering Act 2011 when you get scammed, but you can protect yourself too, all it takes is some common sense, ” he said.

“It is not so easy catching them as there is no physical shop we can raid.

“With cybercrime, we are dealing with professionals who cover their tracks well, they use proxy servers, prepaid numbers and route their communications through different countries like a recent case in Cyberjaya, where the Immigration Department busted over 600 Chinese nationals involved in an online scam.

“Those scammers were operating in Malaysia to cheat Chinese citizens abroad, ” he said.

This is why the ministry also works with other agencies to coordinate efforts to solve cases.

At times, officers will engage with the criminals online, pretending to be interested in buying the product to lure them.

“We also end up buying the products ourselves as part of the investigation and our officers have become pretty good at spotting fake goods, ” he said, adding that some cases could be solved within two days while others took months.

Too good to be true

Shamini K got excited when she saw a branded tote bag on sale for half price. The secretary with a logistics company had been eyeing it for ages as it was her dream bag.

But she could not afford it until she saw the sale on social media.

She placed her order online, but realised the bag was fake when she received it in the mail.

“I should have questioned why the bag was so cheap. It was too good to be true, ” she said.

However, luxury goods are not the only items targeted by counterfeiters.

Face masks was their favourite item during the height of the Covid-19 pandemic.

“Driven by fear, logical thinking goes out and people just want to buy.

“I always tell people to Google, cross-check and verify before buying anything online. Always be safe than sorry, ’’ Shamsul said.

Meanwhile, the ministry seized counterfeit face masks from a factory in Puchong, Selangor.

Enforcement officers disguised as buyers nabbed the culprits who were repackaging the counterfeit items using another brand name.

They were charged under Section 102 (1) of the Trademark Act 2019 and fined RM10,500, failing which they could be jailed for four months.

Shamsul explained that it was common now for culprits to buy unbranded face masks from China and repackage them using popular brand names before advertising the items for sale on social media. 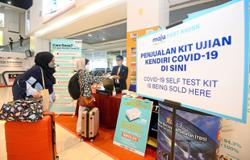