By ADELINE GOOI and ARVIND BHARAT

Tan says the country has had a worsening e-waste issue over the last 15 years.

WITH the vibrant flourish of technology and beauty, cosmetics and electronic wastes have become a significant issue.

From lipsticks and eyeshadow palettes as well as synthetic make-up sponges and brushes to creams and cleansers in plastic tubs and toothpaste in aluminium-lined plastic tubes, cosmetics wastes are disposable materials or ingredients from the personal care and beauty industry.

The amount of waste has been rising, with 55kg of plastic being used in each household per year.

Five-hundred years — that is how long it takes for plastic to fully decompose, and an alarming 80% of wastes in Malaysia can be recycled.

Electronic waste (e-waste) is also rampant with an increase in technological advancement and e-waste generation.

E-waste expert Dr Tan Ching Seong said over the past 15 years, Malaysia’s e-waste issue had worsened, adding that in 2016, an estimated 60 million tonnes were generated each year, with 5% increase each year thereafter.

He provided an example of the correlation between technology advancement and e-waste.

“Upgrading of 5G being breakthrough technology would result in a replacement of subsequent infrastructures, servers, systems and devices as well, which is similar in the case of 2G networks to 4G,” said Tan.

“Handphones would soon need to be changed because of the software difference to access networks at full capability.

“In 2014, almost 42 million handphones were disposed of in the market,” added Tan.

With technology constantly improving, he said the need for proper e-waste management was apparent, reinforcing the need to handle e-waste at an effective level.

Tan, who is the founder and chief executive of Terra Phoenix, said many policies could be set in place to manage the situation, citing countries in Europe that already have such policies.

One policy that can be adopted is economic sense to intensify the collection of e-waste to ultimately minimise the production of waste and collecting them.

Secondly, rewarding those who use electronic devices for longer periods.

Tan said countries in the European Union were extensively using the policy and this was not prominently evident in Asia.

The policy to issue penalties on waste generation to detour the irresponsible act of generating e-waste that is susceptible to consumers and businesses, was another.

Tan said the last policy was systematic education and awareness that can be seen in Japan.

With all four policies in place, he said the e-waste management systems would improve participation and recycling rate, as well as the material recovery investment.

This would benefit the economy with regard to revenue, jobs, taxes and most importantly, the current crucial task at hand — environmental protection.

Tan is the co-founder of iCYCLE, a waste separation and recycling solution provider committed to minimising waste in landfills through its app — Internet of Waste Thing (IoWT) — which can be downloaded via Google Play Store and App Store.

He called for the government, international organisations, business and consumers to work hand in hand to make a difference.

“Consumers should utilise the application IoWT to find out the location of the closest bins to throw their e-waste, with one requirement — to dry and clean items before throwing them,” said Tan.

Batteries and light bulbs have a separate compartment as they are the most toxic and need to be handled differently.

Tan added that many other products could also be disposed of, including toothpaste and cosmetics. 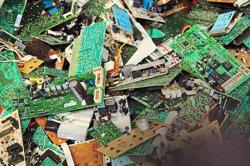 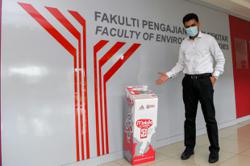