THE public has been urged to take all necessary measures to stop the outbreak of chikungunya that causes joint pains in Penang especially in densely populated areas.

In just the first half of this year until June 13, there have been 212 cases of chikungunya reported in the state.

State health committee chairman Dr Norlela Ariffin said the state government is taking the issue seriously and would be gathering all its resources to combat this menace.

“We’re urging the public to do their part in taking the necessary actions to stop the transmission of dengue and chikungunya.

“Residents should check their homes and surrounding areas to identify and eliminate Aedes mosquito breeding sites each week.

“Mosquito repellent drugs can be obtained from government health clinics, ” she said.

Dr Norlela said residents should cooperate with the authorities by allowing health personnel to carry out fogging in their housing areas.

“We should try to reduce the risk of mosquito bites by using mosquito repellent on clothes while carrying out outdoor activities.

“Get immediate treatment at a clinic or hospital if you are down with fever or show signs of the dengue disease such as body and joints aches, vomiting, developing rashes and a lack of appetite, ” she said in a statement.

Meanwhile, Dr Norlela said the number of dengue cases had decreased by more than 80% as compared to the same period last year.

“Although there is an increase of five cases, the overall number of cases has decreased compared to the same period last year.

“Cumulatively as of June 13 this year, 410 cases of dengue were reported compared to 2,892 cases for the same period last year.

“There are currently nine dengue hotspots in Taman Ayer Itam.

Dengue and chikungunya are both from the same family, arbovirus, but they are different.

Dengue is more likely to cause death, while chikungunya is more debilitating because it causes severe joint pains, usually in the knees and hands.

However, both are transmitted from the exact same mosquito, Aedes. 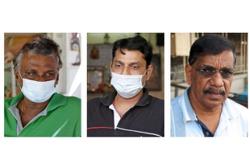