JOHOR BARU: The number of people using Bas Muafakat Johor (BMJ) service has dropped during the movement control order (MCO) in effect from March 18 until now.

He said the BMJ services on all routes were from 6am to 10am and 5pm to 10pm daily during the MCO to comply with guidelines.

“Our ridership has dropped by almost half from 200,000 commuters on all the routes, ’’ said Azarudin.

He said that during the second phase of the MCO, from April 1 to April 14, there were no passengers at all using the bus on any of the routes.

“There were 596 bus trips by BMJ pre-MCO, covering 62 routes and that number was reduced to 253 during the MCO period.

“We have resumed normal operation hours under the conditional MCO, but the number of passengers using our services is still low, ’’ he said.

He attributed this to schools that were still closed and the fact that the public were wary about using public transport for fear of infection.

“Although several economic sectors have reopened, it is not reflected in the ridership on buses.”

He said the public need not fear as the company was following standard operating procedures (SOP) when allowing passengers on board their buses.

“As required, we ensure social distancing and drivers are only allowed to take in 30% of passengers at a time now.

Under normal circumstances, the bus could accommodate at least 40 passengers, he added.

Azarudin reminded passengers to maintain a safe social distance while waiting and boarding buses, including on those operated by private bus companies.

“They must also wear face mask and use hand sanitiser before and after boarding the buses, ” he said.

For the free bus rides, the public must register for the Kad Muafakat Johor at its official website.

It is a service solely for Malaysians who have registered and obtained the travel card.

The nationwide MCO was imposed to contain the spread of Covid-19, with the government easing restrictions under the conditional movement control order starting from May 4. 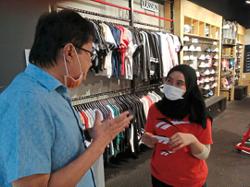