Smart Selangor and PJ City buses are back in business. The bus operators have sanitised the buses and placed stickers to ensure passengers practise social distancing.

SOME Smart Selangor and PJ City buses have resumed operations and will ply 42 routes statewide from 6am to 10pm daily.

Prior to the movement control order (MCO), there were 138 Smart Selangor buses and 32 PJ City buses travelling along 43 routes and six routes, respectively.

Smart Selangor buses along seven routes which are SPG3, SPG4, BTG2, SB02, SB03, HS02 and HS03 will not be operational just yet.

“The buses are operational again in line with the new conditional movement control order, ” Ng said in a statement.

All Smart Selangor and PJ City bus services were stopped temporarily to restrict public movement during the MCO.

“All passengers and even the bus drivers must remember to adhere to the rules and always practise social distancing. Everyone must wear a mask on the bus, ” he said.

Bus operators have also sanitised the buses and placed stickers on seats to ensure social distancing is observed.

A limited number of passengers would be allowed to board the bus, he said.

“We have also mobilised 20 of our Smart Selangor buses to be used by the National Anti-Disaster Management Agency (Nadma) to transport Malaysians returning home, from Kuala Lumpur International Airport to the designated quarantine centres, ” he said.

“As a precautionary measure, all buses have been sanitised and social distancing stickers are placed in the bus and there will be a limit of only 15 passengers per bus, ” said Selayang Municipal Council (MPS) corporate communications director Mohamad Zin Masoad in a statement. 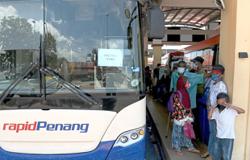 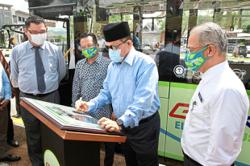