PETALING JAYA: The latest updates from the Health Ministry show that two of the three Federal Territories are now Covid-19 red zones.

The health district of Putrajaya is the latest to be declared a red zone after hitting 41 cases as of noon Monday (April 6).

The districts of Rembau in Negri Sembilan and Jasin in Melaka were also declared a red zone with more than 40 Covid-19 cases.

This follows all districts in Kuala Lumpur being declared red zones on Sunday (April 5).

The total number of cases in Kuala Lumpur is now at 640, with the district of Lembah Pantai recording the highest in the country at 386 cases.

Labuan remains in the yellow zone with 12 cases reported.

This brings the number of Covid-19 red zones in the country to 21. 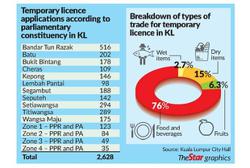