WHEN the government announced the movement control order (MCO) in its bid to curb the spread of Covid-19, cities were plunged into eerie silence as businesses and shops closed in compliance.

For the refugees living in Kuala Lumpur, majority of whom were employed as daily wage workers, that meant the collapse of their livelihoods as their income sources were lost.

Concerned for their welfare, four non-governmental organisations (NGOs) – Tenaganita, Refuge for Refugees (RFR), Dapur Jalanan and LIga Rakyat – stepped up to the plate to organise a fundraiser to supply food to them.

They had achieved their first target of RM30,000 to buy food items such as rice, flour, cooking oil, onions, potatoes, eggs and canned food for 500 refugees families.

With the extension of MCO for another two weeks, the four NGOs are now onto the second round of raising funds, and this time they hope to help 1,500 families.

Tenaganita community mobiliser Hasnah Hussin said their focus was on food items that could be kept for over two weeks to ensure that they could last the duration of the MCO.

“It is important that the refugees have enough to eat during this period, so that they do not fall sick due to starvation, ” she added.

RFR co-founder Heidy Quah said the refugees were from Myanmar, Afghanistan and Syria.

“Many of them lost their jobs since the MCO took effect, ” she said, adding that this was the first time the four NGOs collaborated.

“It took us three to four days to coordinate our efforts.

“We want to ensure that we do not overlap in distributing the food items, ” said Quah.

Hasnah viewed the collaboration as a good opportunity as it allowed the NGOs to exchange ideas on how best to help the refugees.

“Why do we have to work separately when we can all work together towards the same goal?” she noted.

Hasnah and Heidy said the NGOs involved had worked closely in the past with the refugee communities and that helped them to identify individuals who were in need of aid.

“In 2017, Tenaganita worked with a refugee community in Gombak for a research project. So we know them quite well, ” said Hasnah, herself a child of a Rohingyan refugee couple.

“Growing up, my parents placed strong emphasis on my education.

“I was blessed to have been given a chance to attend school thanks to a pilot programme by the government then, ” she said.

Heidy said RFR worked closely with the community heads to channel its assistance and resources, adding that public response to the initiative had been encouraging. 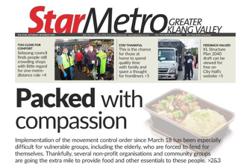