End of the road for historic landmark

THE Penang Island City Council (MBPP) will install a zebra crossing near the Pengkalan Raja Tun Uda ferry terminal in Weld Quay where an overhead pedestrian bridge was damaged after a trailer carrying a piling crane crashed into it.

“As a short-term measure, MBPP will immediately install a zebra crossing and incorporate a traffic light to facilitate traffic and pedestrian movement in the area.

“The council will look into the possibility of building a new bridge but the short-term measure will be implemented as soon as possible, ” he said.

Yew said the road was fully opened to the public at 11am yesterday after cleaning-up works were completed.

He said the bridge had to be fully dismantled as it was beyond repair and found to be structurally unsafe.

“It was a sad day for Penangites as the bridge was a historic monument and facility for pedestrians. The decision to dismantle it had to be done, ” he said.

Yew said the MBPP is also mulling legal action against those responsible for damaging the overhead pedestrian bridge.

Jagdeep said although the state government was thankful that there were no injuries or loss of life from the incident, it viewed the incident seriously.

“From the information received, a police report has been lodged by the owner of the overhead pedestrian bridge, namely the MBPP, and we call upon the police to investigate.

“The MBPP is planning to take legal action against those who they found and deemed to have committed any acts of negligence, ” he said.

Jagdeep said those responsible in damaging the historical bridge needed to bear the loss from the incident and all consequential damages involved during the incident.

“The incident is something that the state government cannot tolerate and it was fortunate that there were no casualties, ” he said.

Asked whether the city council would build a new bridge to replace the damaged one, Jagdeep said the area was part of the Penang Bay project.

He said the state government has a larger masterplan for the whole area and will look into what to do in the project.

On Wednesday, the trailer that was transporting a piling crane from Padang Kota Lama towards Weld Quay crashed into the iconic landmark, causing it to tilt and nearly collapse.

The incident had resulted in the overhead bridge being seriously damaged and prompted the MBPP to cordon off the surrounding area for removal process of the bridge.

An old published article on the bridge, which has been making its rounds on social media, had reported that the 105ft-long and nine-feet-wide bridge weighing about 20 tonnes, was part of an overall ferry expansion programme of the Penang Port Commission back then.

The article also reported that the bridge was installed in 1975 and was the first overhead pedestrian bridge ever built in Penang.

The bridge brought back many collective memories for Penangites.

Among them was Pengkalan Kota assemblyman Daniel Gooi, who said the bridge had brought him many memorable moments in his younger days.

“I remember that I used to tie banners on the bridge when I was working at the DAP headquarters back then.

“The bridge provided shelter to pedestrians, including myself, when it rained, ” he said.

Student Tan Wei Siang, 28, said the bridge brought back fond memories for him.

“As I stayed on the mainland, I remember my mother taking my sister, brother and I to the island on the weekends.

“My mother would take us across the bridge before we start our day trip on the island.

“Now that the bridge is dismantled, it would be hard for people to cross the busy road due to the heavy traffic, ” he said.

A hawker who only wished to be known as Ang, 48, said locals would use the bridge on a daily basis during the good old days.

“But now, only foreigners use the bridge, ” he said.

Meanwhile, George Town OCPD Asst Comm Soffian Santong said the driver of the trailer lorry, a man in his 30s, was found to have 15 traffic police summonses to his name, of which only two have not been paid.

He said most of the offences were related to speeding and obstruction of traffic, adding that the man had no prior criminal record.

ACP Soffian said the driver was arrested on Wednesday for reckless and dangerous driving under Section 42(1) of the Road Transport Act 1987.

He said the man had earlier driven the trailer lorry past three other pedestrian bridges.

He drove safely under one in Tanjung Tokong, one in Jalan Sultan Ahmad Shah and another across the St Xavier’s school in Lebuh Farquhar before crashing into the one in Weld Quay at about 4.20pm on Wednesday. 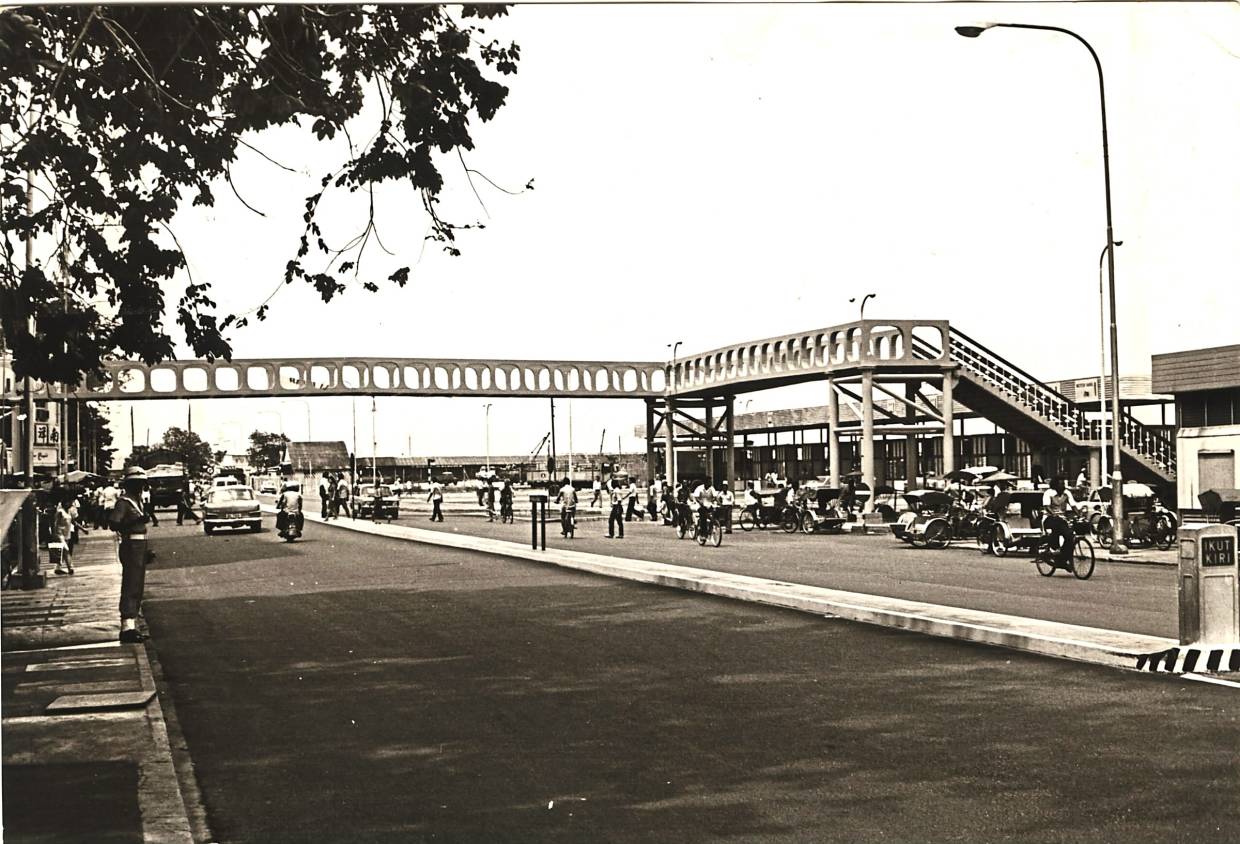 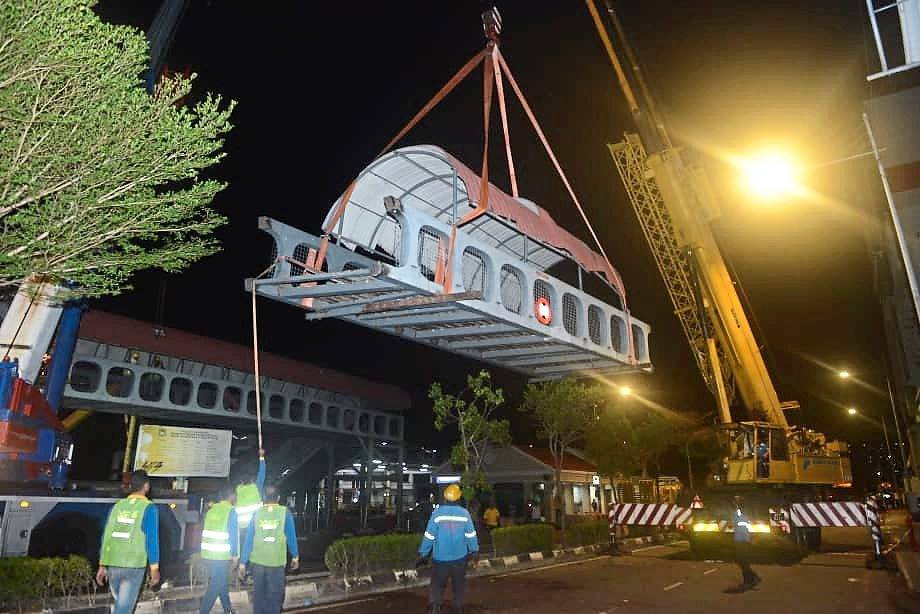 The back of the trailer that was transporting a piling crane hit and damaged the pedestrian bridge as the trailer was passing by Weld Quay.

The front of the trailer made it past the bridge but the piling crane it was carrying hit the structure. — Photos: MUSTAFA AHMAD/The Star

Work being carried out to dismantle the pedestrian bridge in Weld Quay near the ferry terminal.

Workers removing parts of the pedestrian bridge after the crash.

Work being carried out to dismantle the pedestrian bridge in Weld Quay near the ferry terminal.

A 1970s photo of the pedestrian bridge in Weld Quay near the ferry terminal on the right. — Filepic

A section of the dismantled pedestrian bridge being lifted using a crane.