MOHD Rizal Madam has worn many hats since leaving school.

He has been a production operator in a spare parts factory, worked as cashier in a supermarket and in building maintenance as a general worker.

The 36-year-old from Kampung Giching, Sepang has four schoolgoing children and his last drawn salary was below RM1,600.

“The pay was fine when I was single but it is not enough when I have a family to feed, ” he said.

The family live in a 30-year-old wooden kampung house.

“Over the years, moisture caused plywood to expand and warp, creating large gaps in the walls. Rust ate away at the roof’s zinc sheets.

“My wife would call me while I was at work to tell me that a snake slithered into the house. Our house got flooded when it rained.

“That I could not provide my family with a safe and comfortable place to call home saddened me, ” he said.

The napier grass farmer was then with the charity arm for PAS before joining ARIF in 2015. Before Ramadan last year, thieves broke into Abdul Rahman’s (white singlet) house, leaving him with only the clothes on his back. ARIF volunteers cleaned up the mess and got his home looking liveable again.

Although ARIF is Amanah’s charity initiative, it is run as an independent volunteer organisation and help is extended to all deserving cases regardless of political affiliation.

Azlee explained that ARIF members need not be members of Amanah.

Azlee heard of Mohd Rizal’s plight from the Kampung Giching Village Community Management Council (MPKK) and together with a team of volunteers offered help in the form of cash donations and manpower.

The first donation of RM700 was used to buy bricks.

This year, ARIF managed to raise RM15,000 for Mohd Rizal. 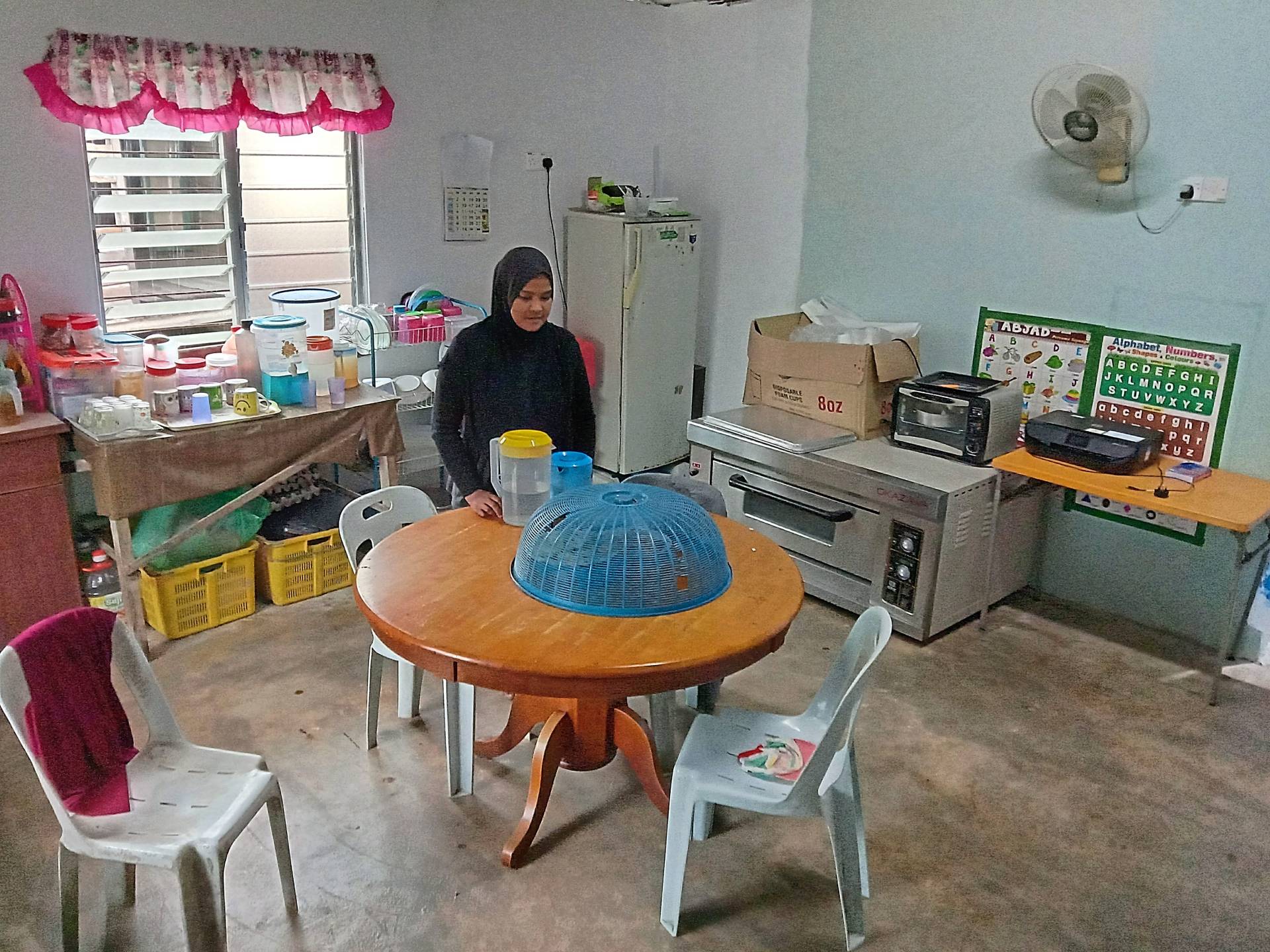 Today, Zaiti Nor Zaikah is able to bake cakes and cookies with some peace of mind in her new kitchen.

The two-bedroom house complete with a kitchen, bathroom, water piping system, new roofing with support beams and newly-painted walls was completed in September.

A set of pre-loved furniture, gratis from a donor and a RM4,000 industrial oven for Mohd Rizal’s wife, Zaiti Nor Zaikah Sylong, a home baker, helped shape the home.

The oven came in the form of government aid under the Selangor Poverty Eradication Blueprint (BBPKNS) scheme following an application by the MPKK committee.

This year, he became ARIF deputy secretary and his weekends are spent helping struggling families with house repairs.

ARIF took on house repairs and rebuilding projects for the poor when it became obvious that many low-income earners were unable to seek help.

This was because they did not meet the eligibility criteria set by government agencies for house repair aid.

Senior citizens, single parents with many dependents and OKUs were among those eligible for government help.

Aid, Azlee said, in many instances was limited to the poorest and in remote areas.

ARIF, however, reaches out to young families and the elderly where a breadwinner earns below RM1,500 and has four to five children to feed. It spent RM40,000 to improve six homes in Kampung Giching this year.

As construction work is carried out by volunteers and houseowners themselves, costs including the price of materials is roughly between RM1,000 to RM8,000, a majority of which goes to roof repairs.

The second highest allocation the group has spent on a house refurbishment project is RM12,000. This was for former security guard Abdul Rahman Basir, 77.

Before Ramadan last year, thieves broke into his house and left him with only the clothes on his back.

ARIF volunteers came in to clean the mess, got him a new wardrobe, replaced old zinc sheets on his roof, rebuilt his wooden house with cement bricks, painted the walls, bought new furniture and gave him a new bicycle.

“All cases are referred to us by either the ketua kampung or the MPKK. Azlee learned of Mohd Rizal’s plight from the MPKK and went in with a team of volunteers to help the family.

“We do not enter a village and carry out renovation work as we like. We will meet the community heads first to find out if there are deserving cases, ” said Azlee adding that the premises’ outer appearance was not a measurable yardstick.

“We have met owners who continue living in dilapidated houses even though they have the means to improve their surroundings, ” he said.

Recipients’ mindsets are also assessed on initial contact when food parcels are distributed.

Priority is given to families who show they have the drive to improve.

Mohd Rizal, for example, self-funded his house project by putting aside RM200 from his salary every month.

The group is focused on helping Malaysians, mostly the rural poor.

To ensure proof of citizenship, the first thing volunteers do upon engagement is ask for the head of the household’s identity card.

Two are in Kampung Salak Tinggi.

One belongs to Sidek Omar, 84, a divorcee with no children.

The floorboards of the house have weakened to such a state that one wrong step could send a visitor crashing to the bottom.

Sidek’s sister, who lives next door, fears her brother’s rickety house may one day collapse on him.

ARIF is in talks with a prefabricated housing company to supply the project with raw materials.

A single-storey bungalow in Kampung Giching has also come under the group’s attention.

The houseowner is in jail and the family has been living without electricity for the past two years. The group has offered to help by getting power supply restored.

Often joining the group in its missions is Pertubuhan Ehsan Penyayang Selangor (CARE), a non-governmental organisation. The kitchen in Mohd Rizal’s house before ARIF stepped in to help the family in Kampung Giching.

“Some are low-wage earners who have children with physical disabilities.

“So between house repairs and medical care for a sick child, the family will give the sick child priority.

“Some are elderly people living alone. They are no longer capable of paying for or carrying out house maintenance.

“Then there are families where the only breadwinner does not earn more than RM1,500 but there are five to 10 children to feed, ” said Mohd Tarmizi.

The NGO’s end goal is to carry out repairs in homes in Sepang’s villages so the rural poor can live in comfort.

Speaking from experience, Mohd Rizal said since moving into his new house, he focused better on his work as he was assured his family was not living in uncomfortable conditions.

Sepang municipal councillor Hazimun Rahman Mohammad, who joined the group in a three-day programme recently to

distribute food aid and look for houses in need of repairs, said agencies overseeing the welfare

of rural communities must go to the ground to see what was going on.

“There must be better communication and cooperative efforts between different agencies.

“Health and education services should come in if it has been found that a struggling family also cares for a family member who is either sick or has learning disabilities, ” he said.

However, for the group’s efforts to be sustainable, Kampung Orang Asli Bukit Tadom, Paya Rumput and Mutus Tua Tuk Batin Hadi Jambik said mindsets must also change or the issue would be a recurring one.

“It is good that the group is helping communities in need with house repairs because many of the Orang Asli are low-income earners, ” said Hadi.

Hadi, however, said it was wrong to assume that the problem could be solved by solely relying on outside help.

“The houseowners themselves must have inner drive for self-improvement.

“They must want to find ways to earn a better income and not just wait for handouts.

“They must take responsibility for the state of their homes and welfare of their families, ” said Hadi.

For a more effective approach, Hadi suggested that it should be compulsory for homeowners (benefitting under a house aid project) to attend awareness and motivation seminars to expose them to the expectations of a progressive society.