Grand parade to the sea

GRAND VOYAGE.....Devotees piled up and arranged hunderds bags of golden and silver offering papers around the ‘imperial boat’ before a final praying ceremony begins which later ended with the setting fire of the offering papers.

THE nine-day Kew Ong Yeah Festival culminated with the Nine Emperor Gods being given a rousing send-off by thousands of devotees along Pantai Bersih in Butterworth.

A crane was deployed to hoist the ‘Emperor Boat’ filled with prayer paraphernalia, rice, sugar, vegetarian dishes and other essential items from its float before placing it in the water.

The devotees who came mostly dressed in white then knelt down and offered prayers as some 50 volunteers loaded the boat and put it out to sea.

Earlier, a large crowd gathered at the Tow Boo Keong Temple in Jalan Raja Uda where the boat had been placed.

They then set off on a float procession along with the boat around town.

Among those present were Penang environment committee chairman Phee Boon Poh who praised the temple for adopting the green initiative by reducing the burning of joss sticks.

“Many of the devotees were given flowers instead of joss sticks to reduce smoke emission, ” he said during the event on Monday.

In Alor Setar, the ‘Imperial Boat’ touted as the largest ceremonial boat made for the festival in the country, was sent off by more than 800 devotees in a grand procession.

Weighing about one tonne and loaded with grain offerings of about 1.5 tonnes, the boat left Pertubuhan Penganut Tow Boo Keong temple at the Mergong Barrage Industrial Zone at 8pm.

It was towed for about 2.5km to an open space beside the Sungai Kedah for the burning ceremony.

Each year, the annual Nine Emperor Gods Festival is celebrated from the first to the ninth day of the ninth lunar month.

The festival, observed by Taoists, is dedicated to the nine sons of Tou Mu, the Goddess of the North Star, who is believed to control the Books of Life and Death.

During this period, devotees will follow a strict vegetarian diet, with some even observing it for an extra day. 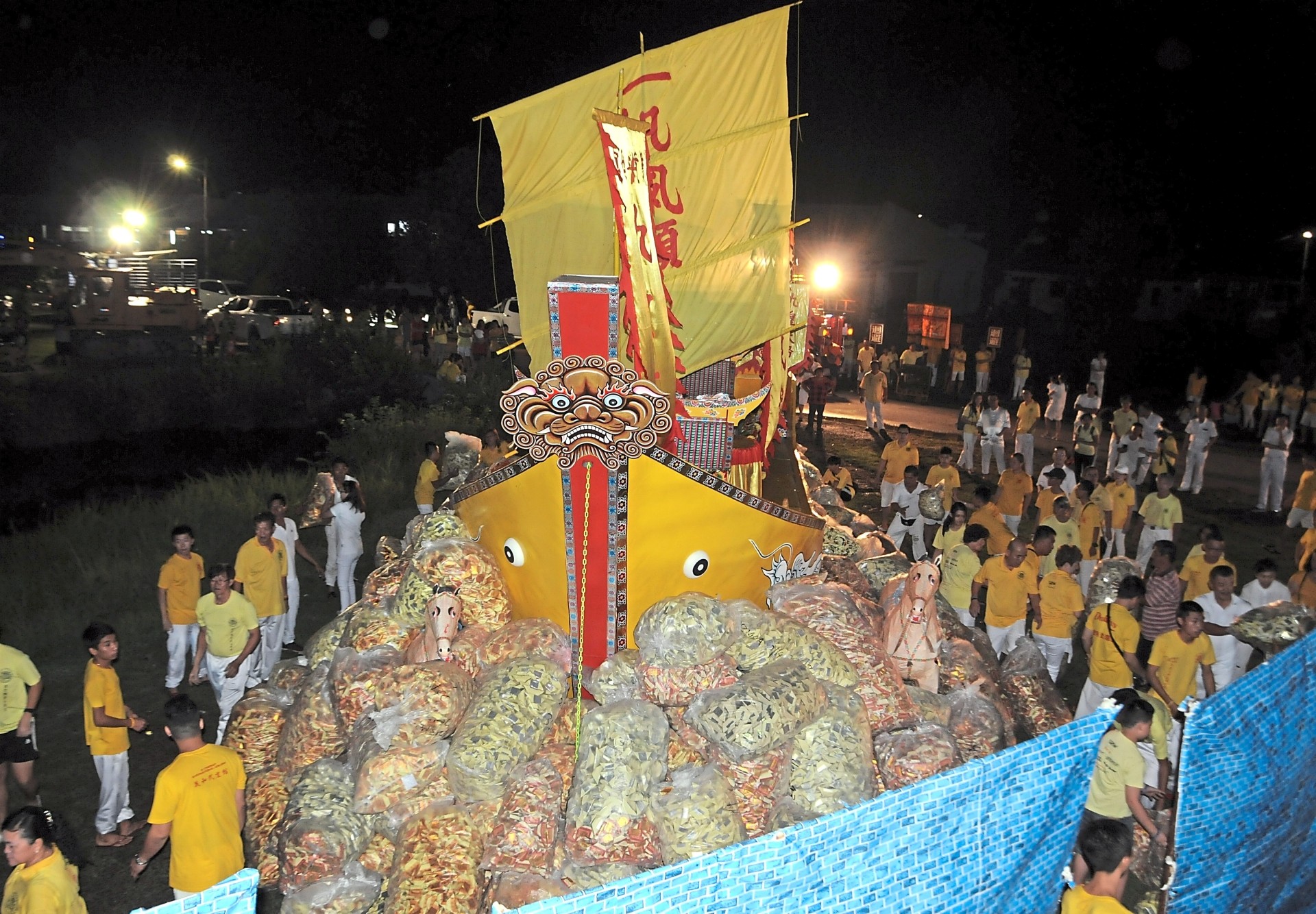 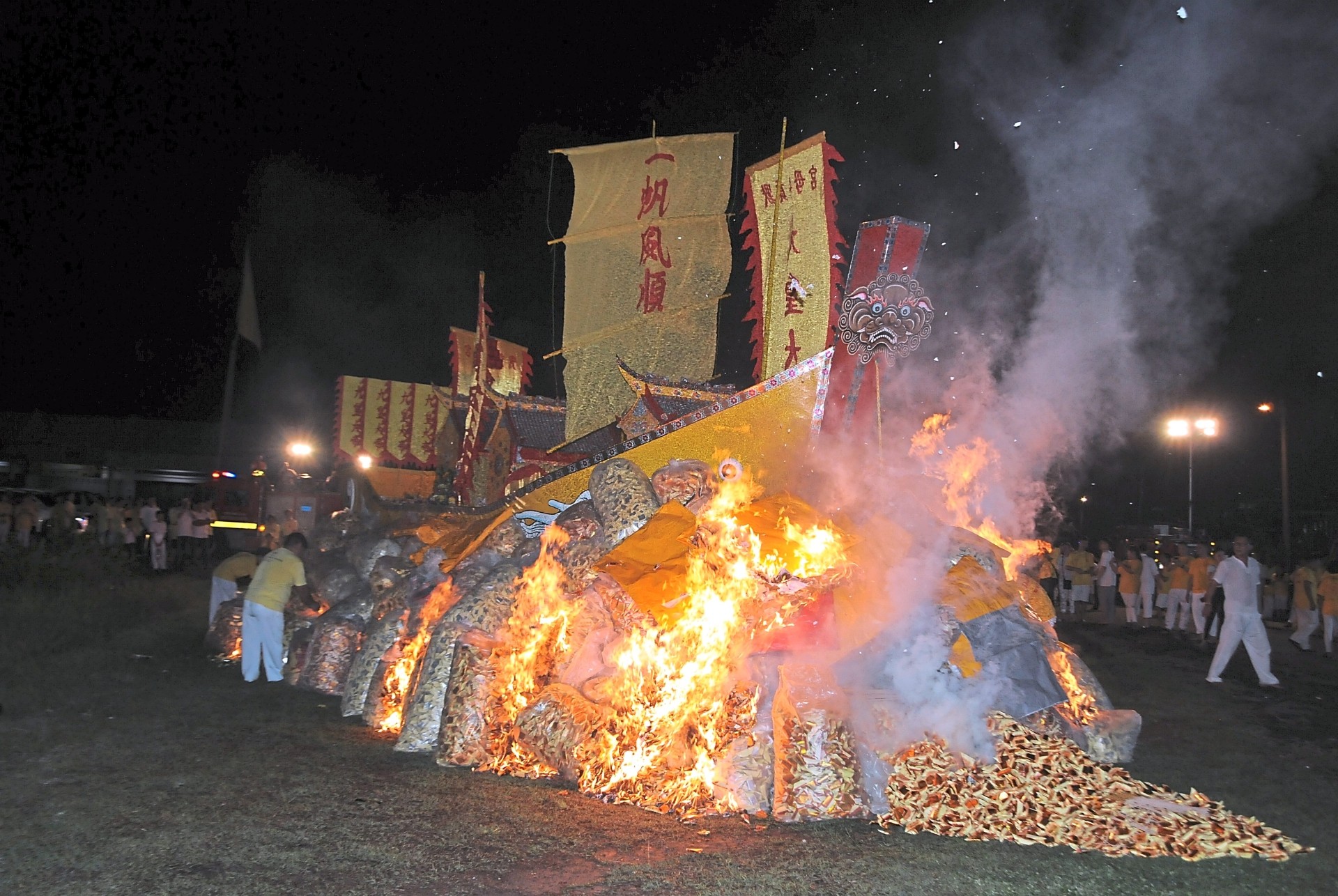 GRAND VOYAGE.....Devotees piled up and arranged hunderds bags of golden and silver offering papers around the ‘imperial boat’ before a final praying ceremony begins which later ended with the setting fire of the offering papers.

Devotees raising their hands in prayer and to take pictures as the boat of offerings is being lifted by the crane for the send-off at Pantai Bersih at the end of the procession from the Tow Boo Kong Temple in Butterworth. — Photos: CHAN BOON KAI/The Star

A float with a dragon head leading the procession followed by the smaller boat of offerings being towed to the seafront in Pantai Bersih, Butterworth. (Below) Mediums in a trance at the festival.

A lion dance troupe performing during the farewell ceremony at the Tow Boo Kong Temple in Jalan Raja Uda, Butterworth.

Devotees carrying flowers during the procession in support of the green initiative although many are still seen offering joss sticks.

The large Imperial Boat in Alor Setar (left) is piled up with bags of paper offerings before being set alight in a huge bonfire (above).