By JADE CHAN and MINNOW YANG 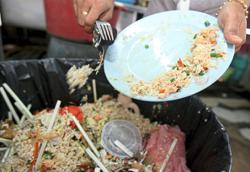 IN AN effort to address the issue of food waste, Sunway Pyramid has introduced an initiative called the Food CPR (Compost, Plant, Reduce) within its mall in Petaling Jaya.

The mall has an on-site compost machine by Maeko, which turns food waste contributed by its food and beverage (F&B) tenants into bio-organic compost.

“The machine, which has a 500l maximum capacity, can churn out about 50kg of compost per day, ” said Sunway Malls marketing and business innovation director Loo Hoey Theen.

“We worked with F&B tenants who were willing to separate their organic and non-organic waste, and trained their staff on the type of organic waste that can be fed into the machine, such as vegetable and fruit peels, meat scraps, bones, egg and sea shells, and bread.

“These F&B tenants will dispose of their food waste into the compost machine near the mall’s loading bay area. We have staff stationed there to ensure the waste is separated properly.” As part of the Food CPR on-ground event at the mall, shoppers can collect free compost from the dispensers. The chart explains how the composting process is done.

Loo said 34 F&B partners have come aboard the campaign thus far, and hopes that more brands would join efforts to reduce food waste.

She said the compost is available for free to the public and is also used for landscaping works within Sunway Pyramid.

Sunway Resort Hotel and Spa has its own Maeko compost machine, which converts food waste from its three cluster hotels in Sunway City into compost that is used for landscape works. Shoppers get to participate in seed planting and pot decorating sessions, redeem seeds for planting and collect compost for gardening.

“Sunway Pyramid collects 2.4 tonnes of food waste daily, and up to 829 tonnes annually. We aim to reduce this quantity from landfills through this food waste management programme, ” he said.

“Through the composting machine, we are also able to reduce waste sent to landfills that will go towards reducing greenhouse gas emissions.

“Given the high propensity for out-of-home dining, this strategic approach allows food waste interception at its source at the mall’s F&B tenants and hotels’ kitchens.”

Chan also cited statistics from the Solid Waste Management and Public Cleansing Corporation (SWCorp) – that Malaysians contribute to more than 16,000 tonnes of food waste daily, which is enough to feed 12 million people three meals a day.

Subang Jaya assemblyman Michelle Ng, who launched the campaign, commended the organisers for their efforts.

“We don’t always have to look towards CSR benevolence to do something meaningful, ” she said. A shopper learning how to grow seeds by layering a container with compost and soil at the on-ground event.

“There is so much we can do within our supply chain to have something more impactful and relevant to our expertise.”

Sunway Pyramid is having an on-ground event until Oct 6 at LG2 Central Avenue (near Guardian) to educate shoppers on the Food CPR campaign.

Shoppers will get to participate in seed planting and pot decorating sessions, redeem seeds for planting and collect compost for gardening.

The compost collection spot is open to the public at its permanent location at Sunway Pyramid’s B1 Blue Zone (near CK Dental). 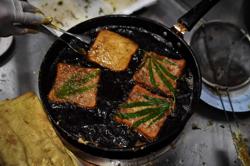