BENTONG: His search for a flavoursome durian ended 28 years ago in Tanah Merah, Kelantan, when he found the “king” of the King of Fruits.

It was love at first bite for Frankie Tong Thien Seng, thanks to a man named Wee, who introduced the fruit which locals in Kelantan referred to as Raja Kunyit.

Back then, Frankie was a 32-year-old fruit sapling seller from Karak, Pahang, who was on a search for the best variety of durian.

“People outside Kelantan generally know that Gua Musang (not Raja Kunyit) is from Kelantan.

“I renamed the fruit Musang King, having borrowed the word ‘musang’ from the town, ” recalled the 60-year-old Frankie when StarMetro visited his orchard in Karak, about 21km from here.

He continues to refer to Musang King as his “superstar of tomorrow”.

“From the day I first tasted Raja Kunyit, I somehow knew deep in my heart that it has the cut to make it big one day, ” he said.

He said he nurtured the specie from the day he brought the sapling from its Tanah Merah hometown to Karak.

“It has the 10 required criteria to be the ‘King of the King of Fruits’.

“It appeals to 60% to 70% of durian lovers. Its smooth and dense bright yellow pulp has a sweet and bitter taste, “ he said adding that the saplings were very saleable.

But Frankie said it was Datuk Seri Liow Tiong Lai who gave Musang King the much needed boost to penetrate the China market.

The former MCA president and four-term Bentong MP (1999-May 2018) was instrumental in the aggressive promotion of the fruit which thrives well in Bentong, Karak and Raub.

“This effort also managed to attract many tourists from China, Hong Kong, Singapore, as well local tourists to visit the orchards, ” said Frankie.

He said the future of Musang King as well as other popular species like Red Prawn, Tekka, Black Thorn and XO was bright.

“To date, only 1% of the 1.4 bil population in China eat durians. The number is growing. Just imagine when 10% of them eat durians, ” he said.

Above all, Frankie said one must have passion for durians if there was intention to venture into the business.

“Good farming practices is a must for high quality fruits and bumper harvest, ” he added.

Apart from that, he said farmers must meet the criteria set by importers in order to have a competitive edge.

“Having access to the overseas market is a good start, ” he said.

Frankie said it was passion for durian that resulted in four generations in his family to persevere in the business - from his grandfather who arrived from China to his son.

Frankie and his wife Wong Siew Leng run the Tong Seng Nursery in Karak, which was registered in 1983.

They have three children, and their son is also in the durian trade.

He said his father Tong Sin Long, in his 80s now, still visits durian orchards and acts as an adviser for farms as far as Sabah and Sarawak.

Frankie recalls as a child following his father on trips to sell saplings.

“Selling durian was not enough to make a living or raise a family.

“We had to sell fruit saplings and do other farm jobs to make ends meet, “ he said, adding that durian farmers were very poor in the old days.

Frankie said that a durian fruit was priced at 10sen about 50 years ago, and the price later went up to between RM1 and RM3 three decades ago.

“Durians are now sold by weight. One Musang King weighing about two kg can fetch about RM100, ” he said.

While new species of durians continue making their way to the market, Frankie said he was confident Musang King is here to stay. 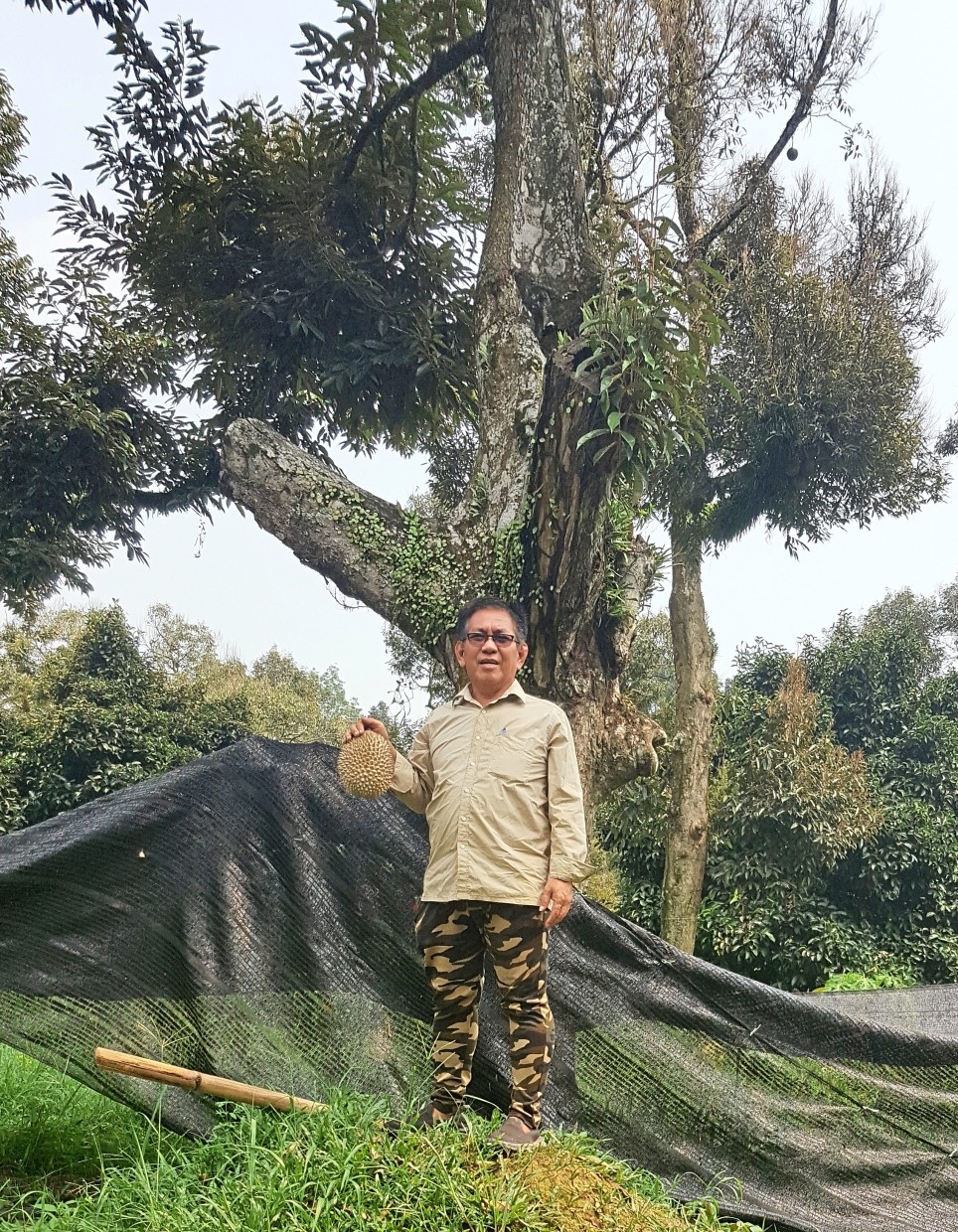 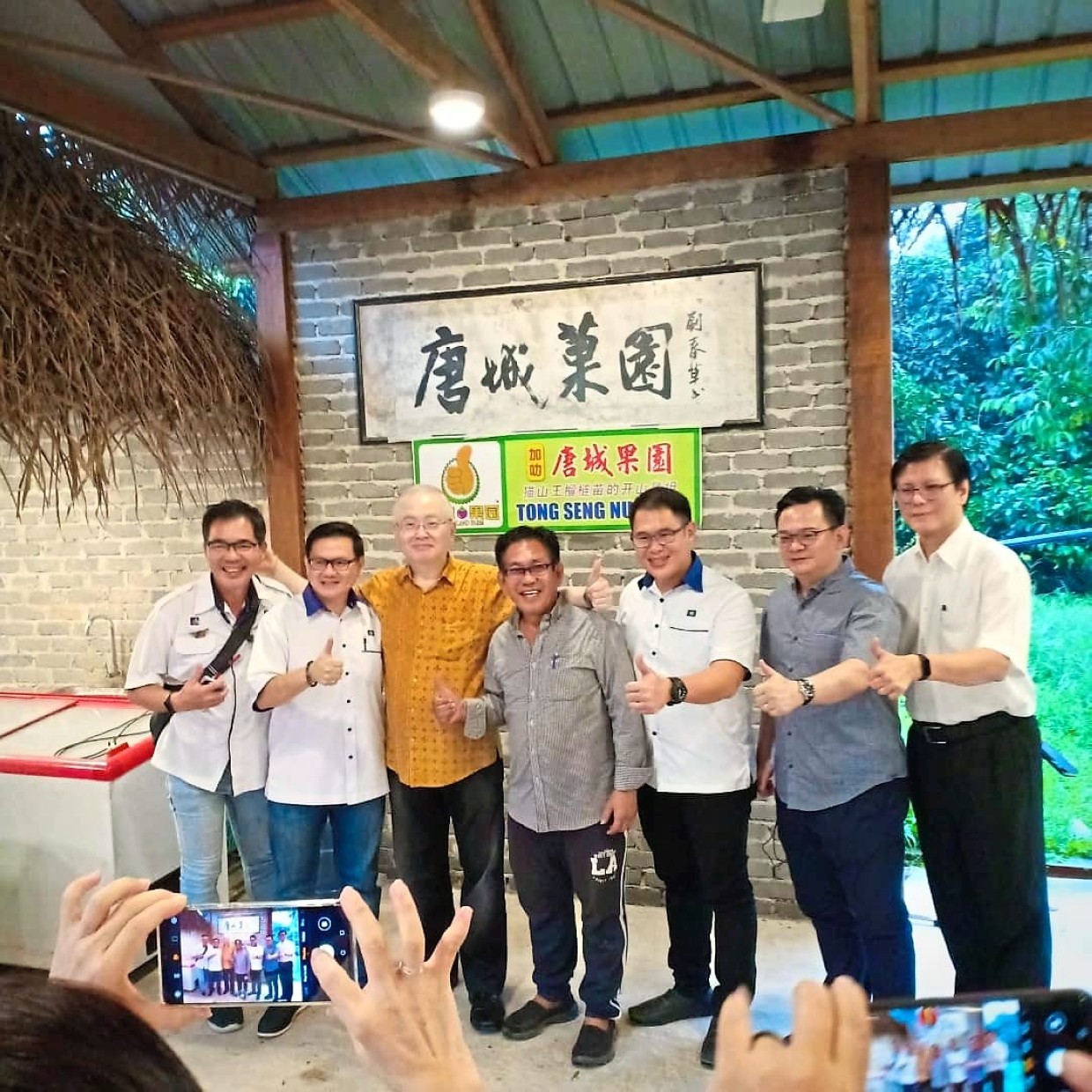 Frankie with his first Musang King durian tree in his orchard in Karak, Pahang.

Frankie and a visitor taking a closer look at the durian specie, D88. It is among several top species growing in his orchard in Karak, Pahang.

Durian saplings at the Tong Seng orchard in Karak.

MCA president Datuk Seri Dr Wee Ka Siong (third from left) and other MCA leaders on a recent visit to Tong Seng Nursery in Karak. On Wee’s left is Frankie.