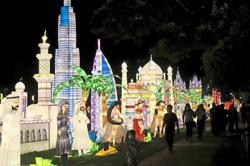 An employee showing the ‘Petola’ loofah planted via the aquaponic way.

AFTER four years of research, an aquaponic farm in Bukit Minyak Industrial Area, Penang, is finally up and running.

In this system, which is a marriage of aquaculture and hydroponics (soil-less growing of plants), freshwater fish are reared in tanks.

Their wastewater will then provide food for growing plants, and the plants act as a natural filter for the water. In short, fish and plants grow together in one integrated system.

Located behind Easypak Technology Sdn Bhd which manufactures packaging machinery, the farm benefits from the automation technology used in the factory.

Aquaponics Science Park Sdn Bhd director Goh Toh Sin, who is also Easypack director, said research on the project started in 2015 and the company now hopes to promote the initiative at schools.

“Through a combination of aquaculture and agriculture, we rear fishes and prawns in the water to plant vegetables.

“The aquatic life produces waste containing ammonia which is then channelled to the farms.

“Ammonia in the waste is converted by bacteria into nitrates that are food for the plants, ” he explained during a tour recently.

Goh said it cost about RM20,000 to RM30,000 for schools to set up the complex system of harnessing hydrology engineering which includes automatic feeders, sprinklers, water-level regulators and sensors.

“Thanks to six companies sponsoring the programme, we have set up the system in three schools while eight other schools are also on the list.

“Although Penang is not a leader in agriculture sector, we can lead through automation of agriculture.

“Students enjoy learning via the system which is different from the conventional farming, ” he said.

Chief Minister Chow Kon Yeow, who was present for the tour, said the state was ready to assist schools in need of funds to set up a similar aquaponic farm.

“Schools may approach the Penang Science Cluster (PSC) for support as we have funds to set up Maker Lab to promote Science, Technology, Engineering and Mathematics (STEM) education.

“Over the years, many schools have already set up their labs and they may consider venturing further by setting up such farms which promote awareness on food security and reducing waste.

“Aquaponics is one of the answers to our food security and to create a sustainable future where our food source is grown locally in a safer, greener and healthier way, ” he said.