TENANTS of five stalls at Klang's Emporium Makan, which is slated for demolition, were stumped after a notice issued on Thursday evening (Aug 22) revoked their licences.

The traders, who had been told they could operate until the end of the year, were left with no choice but to move out with immediate effect as their trading lots were sealed.

The five tenants were in the midst of opening their stalls for evening customers at about 5.15pm, when a Klang Municipal Council’s (MPK) despatch staff handed them the letters dated Aug 16.

All five, whose stalls faced Jalan Raja Hassan, were shocked.

The letters served on them stated that their licence to operate had been revoked with immediate effect and they had to vacate the lots.

Only the five stalls in the first row, out of 29 remaining stalls, were given the letters. Some 30 food stall operators had already moved out earlier after finding out that the food court along Jalan Pasar would be demolished.

Others are appealing for the council to find an alternative site for them.

MPK had earlier stated that it would allow the stalls to continue trading on a month-to-month basis until Dec 31. However, the council changed its mind, drawing criticism from regular patrons who perceived it as being high-handed.

Lim Bee Guat, 56, who sells ABC and other beverages, was distraught that MPK had not given the tenants reasonable time to move out.

“It is so difficult for us.

"We had completed the morning business and now we have prepared for the night customers. It is wrong of MPK to do this.

"It is tough to get transport to move out all our trading items, ” she said.

Yap Sing Keong, 67, who sells wantan mee, was saddened that he had to move out after 49 years.

“I have no place no move to.

"I thought I could operate the stall until December, and in the meanwhile, I have been searching for a place where the rental would be reasonable, ” he said.

Yap said the letter signed by MPK president Datuk Mohamad Yasid Bidin was dated Aug 16, but “it was only given to us only this evening”.

Chew Yew Ban, 49, who sells rojak buah and bubur cha cha, said, “All of a sudden, a letter is given to us to vacate immediately".

He said it was an unreasonable move.

Other stalls owners who have not received such a letter found themselves in a dilemma.

Nainita Nawasir, 61, who runs Rozi Nasi Ayam, just threw her hands up in the air and said: “I am speechless.”

For decades, the food court has offered simple, comfort food and is frequented by both Malaysians and tourists alike.

Opened in the mid-1969, it is the oldest food court in Klang and serves a range of hawker fare, from wantan mee, chicken rice and mee jawa to lontong, satay and bubur cha cha. 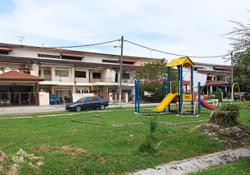