Banners at dengue outbreak areas are a common sight in many parts of the Klang Valley.

THE increase in dengue cases nationwide in the first half of the year is at an alarming number.

More than half of all dengue cases was recorded in Selangor with 42, 700 cases including 36 deaths.

Petaling Jaya has seen a significant spike with an almost 300% increase in cases.

Bukit Gasing assemblyman Rajiv Rishyakaran said he has five mosquito magnets which he loans to neighbourhoods in his constituency when there is a dengue outbreak.

“This magnet functions like a vacuum cleaner. It emits carbon dioxide which attracts mosquitoes. We could easily trap thousands of mosquitoes at one go and this method has proven effective. 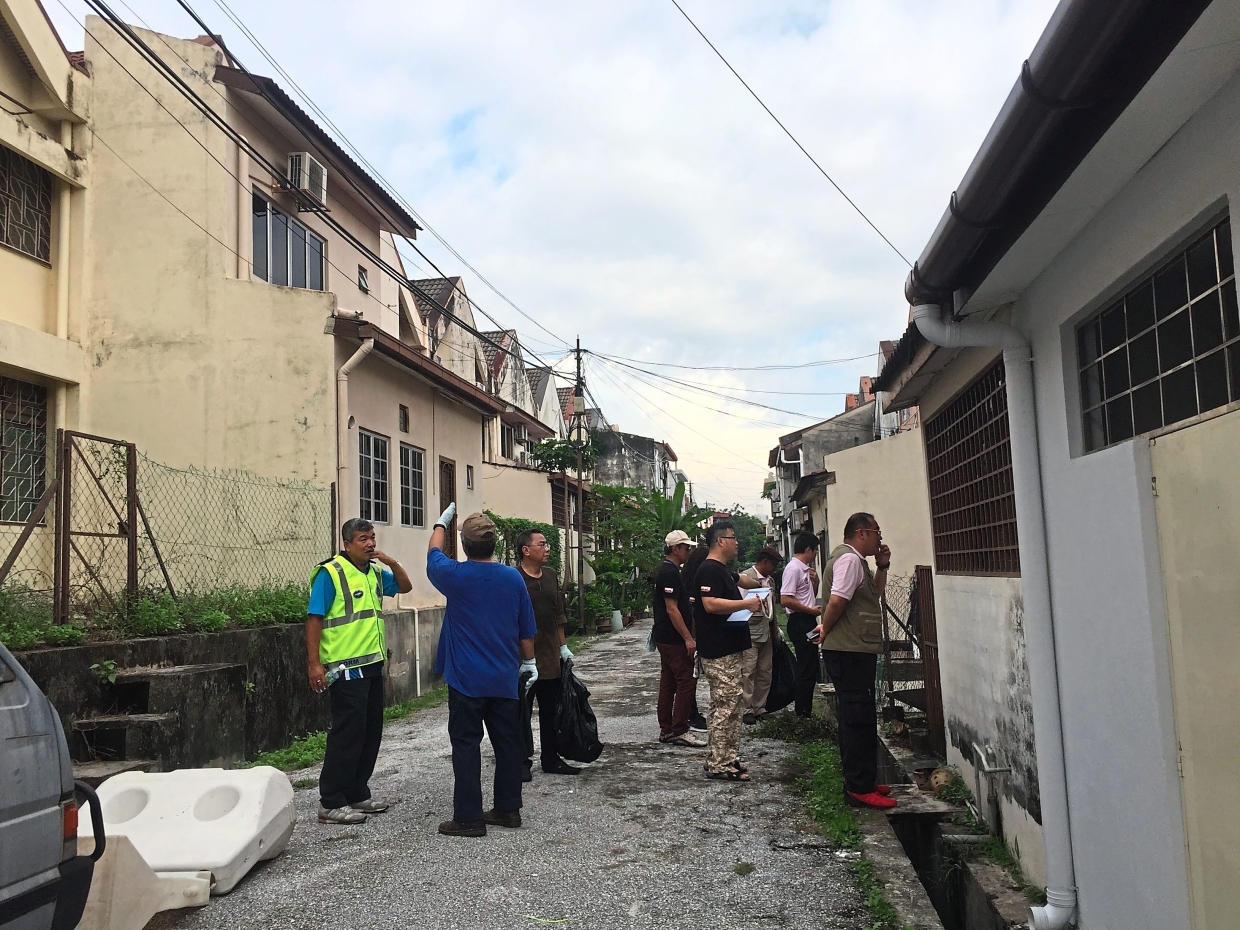 In response to the dengue rise, residents in Subang Jaya had a gotong-royong to clean up their neighbourhood.

“I loan it to neighbourhoods with new outbreaks and it helps reduce cases and from being a dengue hotspot area.”

The weather, he said, was one of the factors contributing to the rise in dengue cases.

“We also found out that there is a new breed of mosquitoes that are more resistant to the chemicals used in fogging.”

Following its listing in the Malaysia Book of Records for its kindergarten syllabus on dengue prevention, the Sepang Municipal Council (MPSepang) will introduce a similar programme for primary school pupils.

Those aged between 20 and 39 are the most to be infected with dengue from January to July 27 this year in Klang.

Azmi said those aged between 19 and 24 leave for college or university early in the morning.

Others below 39 years are those leaving for work at 6am when they are likely to be more exposed to mosquitoes. 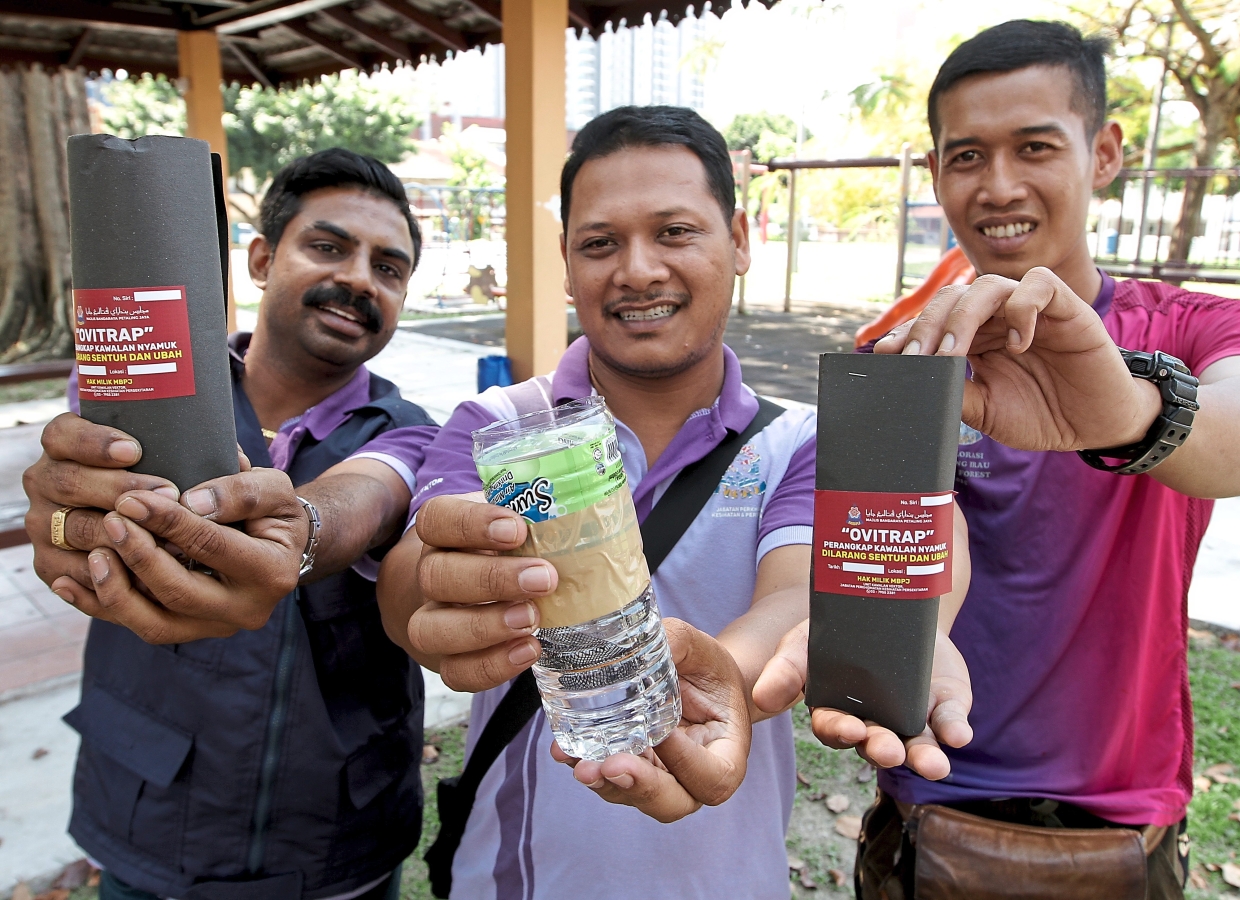 In Shah Alam the numbers dropped slightly this year.

“Although there was a 12% drop in cases, there have been four deaths as of July, ” said Shah Alam City Council corporate communications head Shahrin Ahmad.

In the Subang Jaya municipality, 5, 831 dengue cases have been recorded until July 27.

In Kuala Lumpur, there has been an increase of 142%.

Also, four deaths were recorded this year and 11 last year.

Some 113 hotspots were identified too. 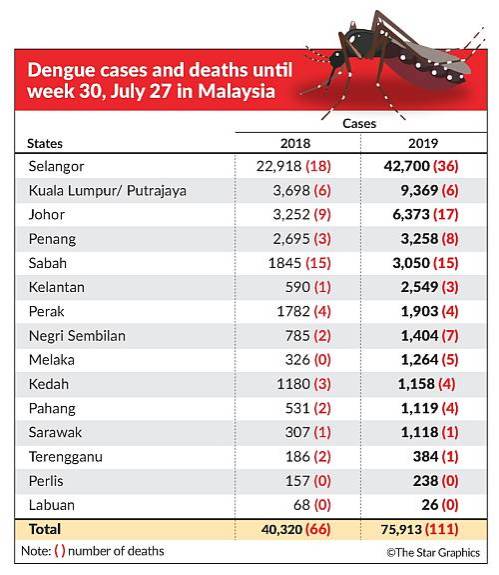 The more serious areas were Desa Pasifik near the KL-Ampang border and Pelangi Indah condominium, off Jalan Sultan Azlan Shah.

The dengue outbreak lasted for 79 days in Desa Pasifik with 91 cases while the outbreak at Pelangi Indah condominium was prolonged over 77 days where 20 cases were reported.

Up north and down south Perak has recorded a 4.3% increase in dengue cases.

Based on the state Health Department website, 1, 813 cases were recorded as of July 20 this year with three deaths, while last year there were 1, 739 cases with also three deaths.

The report said Taman Semaraki in Taiping was categorised as an uncontrolled outbreak and various measures have been taken to contain it.

Dengue cases in Negri Sembilan in the first seven months of this year have increased by almost 80% with 1, 404 cases and seven deaths.

Despite the increase, in recent weeks, it has been on a decline.

“We used to get one case daily during peak periods. We thank these ‘Romeo’ mosquitoes for doing their job although it is still too early to gauge the success of the sterile insect technique (SIT).”

Low said before SIT, Kota Laksamana was one of the areas with a high number of dengue cases.

“Sterile males were released at the Kota Laksamana Apartment area in Phase I. A total of 65, 000 male mosquitoes would be freed in stages to mate with females to reduce the population.”