Customers choosing fruits priced from RM2 to RM25 each at SS2 Durian House.

LAST month a woman claimed that she was slapped with a RM1,000 bill after consuming three durians during a visit to Penang.

Yes, durian is expensive but if you are willing to splurge for a reputable grade, you are definitely in for a treat as the fruit has never been known to be cheap, even as a locally produced product.

In China, where the popularity of the fruit has created a thriving export business for Malaysian farmers and suppliers, a 2kg fruit is sold for between 400 yuan and 440 yuan (between RM244 and RM268) and the demand continues to grow with operators selling it online.

If you are not picky, there are many value-for-money options in SS2, Petaling Jaya where durian stalls hold daily promotions to attract customers.

On most nights traffic going into SS2 comes to a standstill with cars trying to enter the business centre even when most businesses are closing for the day, except for the durian stalls. “We do not mind being stuck in traffic as durian is a seasonal fruit and it only takes a while before we find a parking spot,” said Damien Lim who was savouring the fruit with his colleagues after work.

Lim said he visited SS2 often and knew that the traffic in the area had built up in recent times but felt it was temporary so other motorists might accept the situation too.

The popular Malaysian fruit is attracting visitors in search of the thorny delight, with five stalls offering just about any variant of durian in town.

Although Musang King remains the popular choice, regulars who want a bang for their buck can choose from some 13 other varieties like Tracka, Kim Hong, Black Thorn, Udang Merah, Horlor, Jantung, XO, XXO, D101, D24, Susu, D13 and Mas Johor.

“Different customers have different tastes; some of them come looking for a specific type while others will let me know if they want more bitter or sweet fruit,” said Durian SS Two manager Cheah Kim Wai. 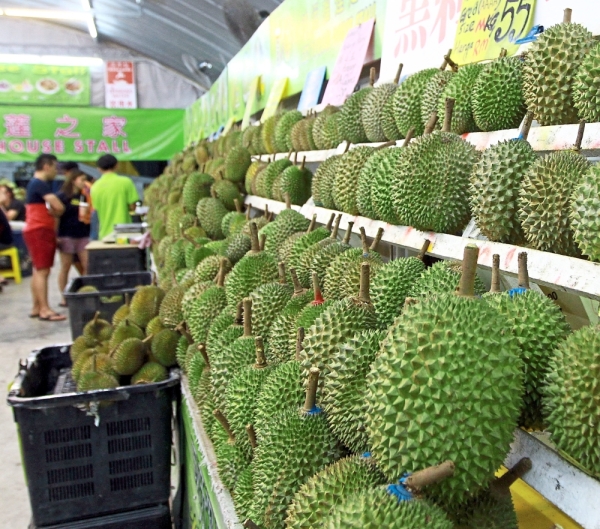 Cheah said the D101 and D24 varieties were favourites among the older crowd and those who had grown up eating the variant. They trust its flavour and know exactly what to expect from it, he added.

However, the majority still prefers Musang King as it is well-known and do not want to feel left out by eating other variants.

“The younger generation enjoys Musang King, maybe because it is famous and that is why we have a high demand for it locally and internationally,” said Chew who was busy packing the fruits into boxes for export when StarMetro visited his shop.

Each box was filled with about 12kg of the fruit –- about four to five durians –- before workers sealed them.

“We export about 200 boxes of Musang King every day to Hong Kong,” he said, adding that demand was equally high in Australia, UAE, Brunei and China.

Chew’s stall, which operates from 11am to midnight, has a steady flow of customers throughout the day but the crowd triples once the sun goes down.

Plastic tables and chairs are brought out to cater to groups stopping by the stall for durian dinners. The Musang King variant is currently more affordable with some stalls selling them for as low as RM28 per kg.

“We only eat durian when it is cheap and my family feels now is a good time to savour all the different types of durian other than Musang King,” said Jonathan Thien who was purchasing the fruit to take home.

Another customer, Adeline Wong, said the cheaper prices did allow her to purchase more durian but she only bought what was needed.

“When you visit durian stalls, you must come with a budget or you will end up over-spending. It is difficult to say no to durians but you just have to control yourself,” said the homemaker.

Those who would like to eat at the stall can enjoy a durian buffet with the D13, D101, D2 and D10 variants for only RM40 per person.

This year, supply of durian is set to increase by up to 30% after good weather in May increased yields.

“We will definitely see more durian in the next few weeks, so we will have to run different promotions every day depending on what durian we have,” said Cheah, adding that it was not yet peak season for Musang King. A worker preparing durian cendol. Other desserts like durian ice kacang, ice cream and smoothies are just as popular. (Right) Durian stalls are often packed with customers after working hours as some prefer to enjoy the fruit for dinner or have it as dessert.

The variant peaks in August and prices are anticipated to drop further.

“If we have too many (Musang King), we may just have to put the variety on the buffet too,” said Cheah.

SS2 Durian House owner Lim Fong Chew agreed that Musang King prices might drop but it was “still a good time to savour the fruit.

“If you are looking for any other variants besides Musang King then now is the best time.

“We have every variant now and prices are very affordable,” said Fong Chew, adding that prices were now lower than they would be later in the year.

Those who are on a tight budget but still want to enjoy the fruit can opt to visit Fong Chew’s stall along Jalan SS2/61 as prices for the fruit start as low as RM2 to RM25 each of either D101, XO, D13 or Udang Merah. Durian stalls are often packed with customers after working hours as some prefer to enjoy the fruit for dinner or have it as dessert.

Customers do not need to weigh the fruit but instead select them according to their prices from a table at the stall front.

“Anyone can have the fruit, they choose which one they like and pay for it,” said the proprietor who gets durian from Perak, Pahang and Johor.

Most of the stalls also offer desserts such as cendol, ice-cream, ais kacang and smoothies infused with durian.

To keep customers cool after eating the “heaty” fruit, the stalls sell fresh coconut water and mangosteen as well.